Prices of a few standard construction framing North American softwood lumber commodities did bounce up last week, but overall most of the market stayed flat. New orders were encouraging if not guarded, as end-users did their best to survive on existing inventories rather than ordering beyond immediate needs in fear of prices dropping again. This is usually the time of year for growing inventories; when U.S. home builders stock up on supplies needed for spring construction projects. One problem for operators might be the delay in data releases due to the recent U.S. government furlough. As that U.S. home building and sales data comes out, end-users will have a better idea of U.S. real estate market conditions for this summer’s new home sales season.

A reference in Madison’s commentary last week to lumber futures trading on the Chicago Mercantile Exchange prompted that organization to reach out by phone. Madison’s is assured there will be a clarification arriving from CME soon. We will, of course, update readers as soon as we are able.

As sales volumes dropped further this week, Canadian WSPF producers felt production and demand were coming into balance. Recent cold weather has slowed down consumption of framing lumber in North American markets, but sawmills have also curtailed their production to compensate for high log costs and sub-optimal market conditions. Lumber manufacturer order files on most items were into the week of March 18 , with nothing but “minimal stock” available any quicker. While #2&Btr R/L commodities were in supply-demand equilibrium, production volumes of lower grade WSPF dimension lumber were “hard pressed” to keep up with sustained demand.

This week’s price for the other large volume-traded softwood lumber commodity, Southern Yellow Pine, surged once again as they eclipsed year-over-year weekly prices for the first time in 2019. Forest2Market’s composite southern yellow pine lumber price for the week ending February 22 (week 8) was U.S. $456 mfbm, a +5.3% increase from the previous week’s price of $433 and a 0.44% increase from the same week in 2018. Year-To-Date average price from Forest2Market’s Southern Yellow Pine index: U.S. $402 mfbm. 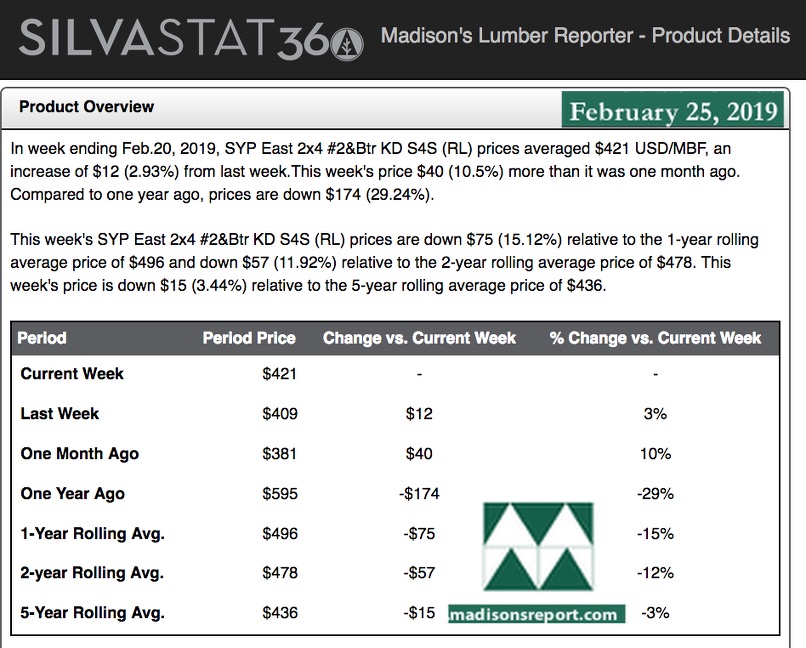 From the point of view of secondary suppliers, the U.S. Northeastern lumber market went further into “hibernation” last week, said Eastern stocking wholesalers. Dropping mercury knocked the wind out of sales, construction, and shipping activity – into and within the region. Any urgency among buyers or vendors was “nonexistent” this week.