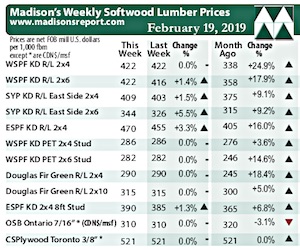 Seemingly non-stop ordering boosted Canadian and US construction framing softwood lumber prices last week as manufacturers kept production levels high to stay on pace with demand. Order files at sawmills grew to three weeks or more, thus the most popular items were “off-the-market” because producers refused to quote prices more than three weeks out. Of the most popular items, 2×6 sales once again were super-hot, indicating that future data for February 2-to-4 unit construction projects will show increases.

Wholesaler prices for benchmark lumber (net FOB sawmill) commodity Western Spruce-Pine-Fir KD 2×4 #2&Btr remained flat over the previous week at US$422 mfbm, an $0 or +0 per cent increase from $404 the week before.

Sales volumes of Western Spruce-Pine-Fir 2×4 and 2×6 R/L #2&Btr and #3/Utility were “excellent” again this week, with most mills reportedly off the market on those items before Wednesday. — Madison’s Lumber Reporter

This benchmark softwood lumber commodity price is now down $106, or -21 per cent, from one year ago’s level of US$528.

Weather continued to cause problems for product shipments, but did not impede timber harvest. Producers were thankful for this respite, at least, all the while being wary of looming spring forest bans until currently frozen roads melt then solidify again after the spring rains come and go. For their part, secondary suppliers just tried to find balance between waning sawmill inventories and ongoing customer hunger.

This week’s price for the other large volume-traded softwood lumber commodity, Southern Yellow Pine KD 2×4 #2&Btr East Side surged again in week 7 of 2019 as they continue to close in on prices seen during the historic price run of 2018. Forest2Market’s composite southern yellow pine lumber price for the week ending February 8 (week 7) was US$433 mfbm, a +4.3 per cent increase from the previous week’s price of $415 and just a -3 per cent decrease from the same week in 2018. Year-To-Date average price from Forest2Market’s Southern Yellow Pine index: US$394 mfbm.

For producers of Eastern Spruce-Pine-Fir last week, protracted delivery times and persistently low inventories kept prices and demand relatively strong amid fronts of winter weather. Even as construction and consumption slowed down overall there was a general clamour among buyers who struggled to cover their immediate needs in effort to prepare for the increase in business they were sure will come when clement weather returns. Order files may have been just two to three weeks out but players assured that “sawmills were definitely in the driver’s seat.”