North American construction framing dimension softwood lumber prices last week improved greatly over those one-month-ago, even surpassing what prices were in May 2019.

Suppliers of Western SPF commodities in the United States were cautiously optimistic to start the month of May. Both primary and secondary suppliers reported a positive tone to the market. Producers extended the bulk of their sawmill order files into late-May. Sales activity of most commodities was solid, with 2×6 #2&Btr R/L the only item lagging behind slightly in demand early in the week. 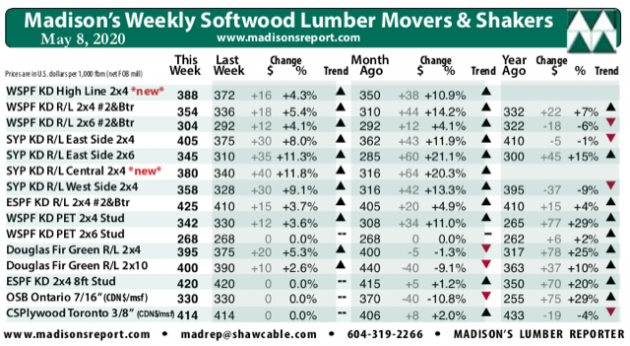 “Demand for softwood lumber came from everywhere. Buyers in Canada and the US urgently tried to replenish their sparse inventories, while consistent orders for both #2&Btr and low grade came from China.” — Madison’s Lumber Reporter.

In Eastern Canada, sales activity took a couple days to get going again last week, as producers were reluctant to sell far out on the limited production volumes which became available. Due to throttled supply, finding exact tallies among depleted sawmill inventories to cover immediate needs was difficult. Buyers were forced to search around for incomplete orders to furnish their own scant inventories. For Eastern stocking wholesalers on the shores of New Jersey, the beginning of May didn’t look much different than the gloom of April. As sawmill prices advanced, vendors did their best to turn a profit on the limited business they could find, but most ended up losing money on virtually every transaction.

“Curtailed sawmills eased their order files into the first week of June on most items, as buyers lamented scant availability of both dimension and stud commodities.” — Madison’s Lumber Reporter