Dec. 9, 2013 - There’s no rest for the wicked, or apparently forestry entrepreneurs. Forestry legend Frank Dottori admits that when he gave up the reins at Tembec eight years ago for a consulting gig, the plan was not to fade into semi-retirement. Still, he didn’t expect to own and operate a large sawmill either.

Yet when the group he was advising stepped away from a negotiation to restart a sawmill in White River, he found himself stepping in and taking over the agreement. Canadian Forest Industries caught up with him at the White River Forest Products sawmill, where he explains why restarting a mill that has been closed for seven years is challenging even for the most experienced forestry entrepreneur.

Dottori first looked into the White River sawmill (located in Northern Ontario halfway between Thunder Bay and Sault Ste. Marie) when he was the president of Tembec. In early 2000, the company was considering merging with Domtar to create one big forestry company, so he had carefully considered all of its assets. “In this business, you’ve either got to be small and a specialist or you’ve got to be big enough that there aren’t too many sharks that are going to bite you,” he says in explaining the proposed merger.

From that research he knew that the White River sawmill had the second highest profit margin among Domtar mills. A solid log supply close to the mill was among the assets the mill enjoyed. With a plan in place to restart the mill, and as the area forest had been untouched in over five years, the mill was granted an annual harvest of 620,000 cubic metres. Dottori notes this is a good volume, plus he expects to be able to buy another 200,000 cubic metres on the open market, if necessary.

On the downside, the mill had been shut down for seven years, suffered from significant design and equipment inefficiencies, and had a few other problematic details to be sorted out. Chief among these was securing reliable customers for the mill’s chips. The sawmill’s two chip customers, pulp mills in Terrace Bay and Red Rock, had shut down, leaving the sawmill without a market.

“You can’t run a sawmill unless you have somewhere to sell your chips,” explains Dottori. “Technically, the mill had no choice but to shut down.”

The pulp mill in Terrace Bay was reopened in 2012 after Frank Dottori, as chairman of AV Terrace Bay Inc., purchased it from Terrace Bay Pulp. With the chip sales secured by this hungry customer, the sawmill’s prospects were drastically improved. With a good supply of wood, customers for the chips and the price of lumber climbing, the sawmill had the three of the four key components required to run a profitable mill. Financing was the next big hurdle.

Dottori shows some frustration when discussing financing options available to today’s forest sector. “Basically there aren’t any. The banks won’t touch you until you don’t need the money. We explored options, but basically the project is self-financed.” In other words, The Bank of Frank. As a result, getting the mill started and up to speed is critical to any short- and mid-term modernization plans.

“Going forward, we know how to make it a low-cost mill but the question was can we find the money to do it? The first thing you’ve got to do is start it,” says Dottori, adding that expansion or modernization investments will likely be coming from cash flow.

Restarting the mill
Although the mill had been shuttered for years, that did not discourage Dottori from jumping in. When he walked through the closed mill, his experienced eye didn’t locate any red flags or immediate hurdles to production.

“This is a really nice mill,” he said to himself. “It’s big, maybe a little bit too big.” But he thought it had a lot of potential.

The logs currently enter the mill precut to either eight- or 16-foot lengths, although once the existing slasher deck is rebuilt that will change. At that point 40 per cent of the wood that comes into the yard will be pre-slashed, with the slasher able to handle the rest. For now, the mill buys primarily tree-length wood that is gang slashed into whatever length the market requires.

After slashing and debarking on Nicholson and Cambio debarkers, logs are sent to feed bins for the three saw lines. There’s the Optimil Pee-Wee line, which can take up to 10 inches in diameter in eight- to 16-foot lengths. There’s also an Optimil large-log canter that can take logs that are up to 30 inches in diameter (which are usually white spruce) and 10- to 16-foot lengths. Cants go to an inline a bull edger, with boards managed on a board edger with side chipping heads. Edging is one of the mill’s bottlenecks he expects to be upgraded in time.

Smaller logs are processed on a HewSaw line, which runs logs that are up to 12 inches in diameter at eight-foot lengths. This line has been extensively upgraded since the mill opened, including new optimization equipment from HewSaw partner ProLogic+. The line has started producing this fall. Dottori says the machinery suppliers have been very accommodating in helping him get the mill running.

“HewSaw came to the table with solutions and payment terms that fit our needs, and others like Samuel Strapping have been great to work with in getting equipment running or running better. Basically they ask what do you need to get running, how can we help, and the work gets done – that’s customer service.”

Next the lumber travels through the 35-bin sorter, which should handle around 120 pieces of wood per minute but maxes out at 105 before it starts to clog and cause problems. It will be upgraded.

The mill has three dryers: two inside the building and one outside. The planer mill is massive, running a relatively new Coastal planer that Dottori says is a good machine. White River has also purchased a new VAB planer optimizer, which will be in operation this fall.

Widening bottlenecks
Looking ahead, there are a few kinks in the sawmill’s logistics that need to be ironed out. Dottori explains that when the HewSaw line was added, the downstream flow was not able to handle the extra production. The added capacity the second line provides slows to a bottleneck in the sorter.

The problem was that the sorter could handle only 100 pieces per minute, regardless of their size and length. It was made for 16-foot logs. When the HewSaw line was added to produce eight-foot lumber, the volume of lumber off that line was half that per piece compared to the random lines. But after making a million-dollar investment in lumber-handling gear, Dottori expects to have solved the bottleneck issue.

“Now, we’ve got to run the mill differently,” he says, explaining the mill’s logistics. “We could run the HewSaw and one other line – not all three lines. When you run three, you choke the sorters. So we’ve got to run it according to the wood mix. Small wood, we’ll run the HewSaw; when we’ve got big wood, we run the big lines.”

Jumping quartiles
Dottori plans to invest around $15 million over the next couple of years to fix the mill’s logistics, ease the sorter bottleneck, and upgrade some of the equipment, such as debarkers and scanners. He is also looking at adding a millyard slasher and sorter system to sort the logs by size before they are carried into the mill by a side entry deck. This would clean up some of the debris that litters the mill and jams the conveyers, allow for a more efficient system, and increase the mill’s capacity.

He has engineering firms looking into other options as well. Overall, the goal is to move the mill up into the next quartile for operating efficiency and unit costs.

So far, the forestry mogul is pleasantly surprised at how smoothly the reopening has been to this point. The team managed to attain 270,000 board-feet/day in November on one 10-hour shift. The long-term plan is to produce 300,000 board-feet per 8-hour shift running two lines, or 120 million board-feet/year by April.

“At the rate it’s going,” Dottori muses, “we’ll probably be there a lot faster than we anticipate. I’ve got to watch I don’t get too excited about these things.” 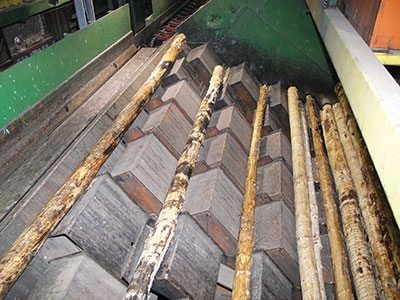 A solid log supply close to the mill is among the advantages the mill enjoys. There’s no rest for the wicked
Print this page