Aug. 16, 2016 - Never do business with family. This a belief held firm by many people across many sectors. But in forestry, it is not uncommon to find second- and third-generation logging operations that have been passed down from one generation to the next. 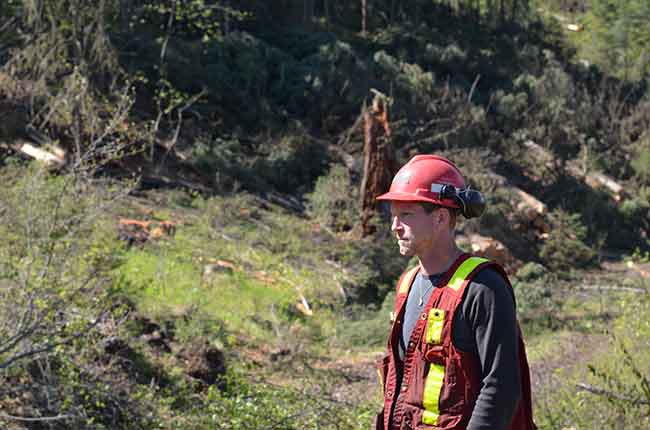 Never do business with family. This a belief held firm by many people across many sectors. But in forestry

That said, handing the reins of a business over to the up-and-coming generation is a challenging transition. This is especially true for the people who are taking over ownership of the business and moving it forward. Just ask Dan Todd of Bill Todd Logging Ltd.

Dan, along with his two brothers, Trevor and Dean, took over their parents’ logging operations over a two-year period after their mom and dad decided they wanted to retire.

“The transitioning from Mom and Dad retiring to us has been pretty challenging,” Dan says on our drive to one of his company’s harvesting sites around Roche Lake, about 40 kilometres from the company’s head office in Kamloops.

He still remembers sitting down with his brothers and discussing taking over the business.

“The recovery from 2008 has been super slow – the money hasn’t been there – and with us transiting the succession plan with Mom and Dad retiring the last couple of years we were asking ourselves, ‘Why the hell are we doing this? There’s no money in it.’ So it was a hard shift.”

To plan for the transitioning of the company over to the three brothers, all of them needed to shuffle around their responsibilities.

Dan, who over the years moved from being a processor operator in the mid-1990s to supervising the crews in the bush from 2003 until just over two years ago, transitioned to looking after the day-to-day operations out of the company’s head office in Kamloops as part of his parents’ succession plan.

“I’m almost never in the bush anymore,” he says.

Dan’s younger brother Trevor moved from overseeing the log hauling operations and trucks to supervising all the logging crews in the bush; while his older brother Dean looks after the bunching operations.

Both Dan and Trevor admit that working under their parents could be difficult at times. Of course, running an operation with your two brothers also has its challenges.

Although the three brothers don’t always see eye-to-eye on how the operations should be run, they do appreciate the opportunity to bounce ideas off of each other.

“Being able to share ideas, that’s the nicest thing about it,” Trevor says.

Steeper ground
In order to operate a successful logging business in the southern interior of B.C. in the years to come, Dan believes moving to higher ground for harvesting fibre will be vital.

How it all started
Although Dan has worked in forestry since 1990 – started out hand bucking for a contractor operating out of Chase, B.C. – he and his brothers have been immersed in the forestry sector practically since their births.

“I grew up in the bush in a logging community on Adams Lake,” Dan says. “Dad had a wheel loader and sub-contracted for a contractor on Adams Lake [that worked for Interfor].”

The Todd family moved to Chase then Clearwater. After moving from Adams Lake, Bill Todd Logging purchased its first logging contract to supply a Weyerhaeuser mill in Vavenby, B.C. and quickly accumulated all the machines necessary to run its logging operation. The company  then bought another contract from a Weyerhaeuser Kamloops contractor in 2004 then moved operations to Kamloops.

The company grew to about 16 employees until 2008, when Weyerhaeuser closed the doors to the mill operations Bill Todd Logging was supplying. That timber license was then bought by West Fraser and split with Interfor.

“We had a history with Interfor 10 years before, and ended up back with them,” Dan explains. “Now we’ve been logging for Interfor for seven years.”

Under their second run with Interfor, Bill Todd Logging has experienced significant growth.

“In 2008 in the downturn, we were probably around 16 guys,” Dan says. “Since then, we’ve grown to 32. We run double shifts and have seven log trucks. It’s taken a long, hard five years to build a crew that will stay.”

Ironically, due to the recent downturn in the oil sector, Bill Todd Logging is now experiencing an influx of people coming into its office regularly looking for work. That said, the company has its reservations about hiring former oil patch employees.

“Where were they four or five years ago?” Dan says. “They’re going to be gone again the next time the oil fires up.”

Although the company had a solid harvest of 250,000 cubic metres in 2015, and is hoping for more this year, it has had to contend with some challenging blocks over the past few years.

“One big challenge we used to have was doing the pine beetle wood, because we were in its third pass,” Dan explains. “The first pass they logged all the good wood, the second pass they tried to capture what was left before the bugs got it, and the third pass was all the crap that was left that nobody wanted. You can survive a short stint of it and get into better wood and have an okay year, but two years ago the company was harvesting third pass beetle-kill wood for eight months. We were running 10 processors shifts and the volume was like 16 loads a day,” Dan says.

Nowadays, the company typically harvests fir on lower ground in the summertime, and then as soon as the area dries up goes into higher elevation and harvests mostly spruce and pine.

In additional to starting its work on steeper slopes this fall, the company is also trying to add a little extra work from additional mills in the area – with the majority of the wood harvested going to Interfor’s Adams Lake sawmill.

“We did a little bit of work for Gilbert Smith, a cedar mill in Barrier, B.C.,” Dan says. “We’re hoping to do a little more work with them in the future.”

New gear
Bill Todd Ltd. is regularly investing in the latest equipment for its harvesting operations and has a diverse set of equipment from a wide array of manufacturers.

Although the company is regularly investing in the latest gear, Dan is extremely excited to take ownership of Bill Todd Logging’s first tethered steep slope equipment this fall.

“It’s really exciting to do something different like that,” he says. “You’ve got to get in and learn it because it’s not going away.

Although the transition involved in the family’s succession planning has had its share of challenges, Dan says working with family isn’t all bad.