Oct. 21, 2013 - When Bill Boardman talks about his 33-year career as a faller, there’s a lot of passion in his voice for a job he says he was born to do. And there’s anger, too. A third-generation faller, Boardman grew up in a logging camp in Knight Inlet owned by his dad and granddad. Though he wasn’t a faller, his great grandfather worked in the woods, and was killed by a falling tree. Boardman has grieved the loss of 19 fallers during his four decades in the woods – among them were two of his closest friends.

He’s become an outspoken critic of any working conditions that put fallers at risk.

So when Boardman received the Cary White Memorial Award for Lifetime Achievement from the B.C. Forest Safety Council last fall, he accepted the honour with a mix of pride and sadness. He acknowledges that much needs to be done to make the forests safer for fallers. But those who’ve worked alongside the man known as the “faller whisperer” say it’s safety-driven professionals like Boardman who offer hope for future generations working in the woods.

Peter Sprout, manager of falling programs for the council, has worked with Boardman on new faller and remedial training. “I’ve sent him out to work with guys identified as having poor work practices. The first day they’re resentful. Pretty soon they’re sitting on a stump, saying, ‘I get it.’ He knows how to get into their heads.”

“He has a unique way of getting his point across, and a rare talent for being demanding and diplomatic at the same time,” he says. “The students I see are glued to him.”

Boardman says he remembers the days when fallers were looked up to like kings: they had their own table in the cookhouse and a separate bunkhouse. The work was steady, and others accorded the same respect to experienced fallers they might an ancient cedar.

But controversy – and tragedy – has dogged the industry since the early 2000s, when falling became the focal point for the dangers in B.C.’s forests.

In 2005, the B.C. Coroners Service reported 45 forestry-related fatalities, seven of them fallers. WorkSafeBC and the council have since worked together to create a culture of safety in the forests. One means of embarking on that safety mission has been through the certification of fallers under the new BC Faller Training Standard.

From Boardman’s perspective, once the standard was brought in, “everyone had to step up to the plate.” Initially, he saw resistance, but since then, he says, acceptance has grown. “Now, the reality is chain brakes are like seatbelts.”

Former faller Dave Gaskill knows firsthand what it’s like to benefit from working with Boardman, a bull bucker (faller and bucker supervisor) with “an unprecedented focus on safety” years before the introduction of training and certification standards for fallers.

“When Bill came to see you, he’d look at the quality of your stumps,” says Gaskill, now an occupational safety officer for WorkSafeBC. “He would comment if he saw sloppy work. He wouldn’t tolerate it. I’ve seen him let guys go for bad work.”

Boardman would walk the quarter, inspecting the falling face and looking for hazards, document them, and then formulate a plan. “Nobody did that back then,” Gaskill says. “He’d inspect your equipment. And he’d make sure you maintained two tree lengths from your partner.”

During helicopter tree removals, Gaskill recalls Boardman being particularly diligent. “On steeper ground, a tree can slide for a kilometre and cause fatalities,” he explains. “The tree can come down the mountain like a freight train.” Boardman would walk the ground until he was 100 per cent sure that a tree wasn’t going to come down from above on a faller. “I learned from watching him.”

Trainees benefit from a voice of experience
Dave Gaskill’s wife, Wendy, a former certification co-ordinator for the council, was the one who nominated Boardman for the award. She calls him the “faller whisperer,” because of his knack for getting fallers to listen to him – no easy task, she says. “Fallers are a tough breed. They’re independent-minded, and can be reactionary at times.”

She often sent Boardman out to work with fallers on additional training after they were certified. “I would unleash Boardman on anyone – usually someone stuck on the ‘way-back-when days’ – who scored low on their evaluation due to inability or unwillingness to meet the standard. His goal was to work with the men to raise their mark high enough, so my ‘evil eye’ would look elsewhere.”

She feels personally grateful for his uncompromising stance. “He was one of the fallers who broke in my husband back in the day. I thank him for providing the tools that kept Dave safe throughout his career.”

Boardman had no such safety mentor when he began falling trees in 1976. “I’ve seen the full spectrum from: ‘Here’s a chainsaw. Good luck. We hope to see you tonight’ to big companies willing to do in-house training.” In addition, he’s witnessed a lot of changes in the industry itself. “My granddad logged the valley floors. My dad logged the side hills. I’ve been put in a helicopter to the top to where my granddad said, ‘They’ll never log that wood up there.’ ” And now that they do, fallers face a new set of risks. “On steeper, tougher, inhospitable ground, the danger goes up.”

Since 2009, Boardman has been providing faller safety training for the council. These days, he leaves nothing to chance when he’s working in the woods. “Maybe I’m a glass-half-empty kind of guy, but in every single situation, I ask, ‘What can go wrong here?’

“In this business, you don’t make mistakes. You don’t get second chances. You get crushed, maimed, or killed. There’s no margin for error.” He cautions fallers to “leave their problems in the truck” and maintain a constant focus on the job. “It’s like playing chess: always stay five moves ahead so you can adjust the plan.”

The faller whisperer turned 62 in May and is still falling and training others, still trying to make changes, one careful cut at a time. “I like taking these new guys and trying to implant in them safe work practices that will stay with them all their lives.”

For information on B.C. faller training and certification, visit www.bcforestsafe.org/training/faller_certification.html. 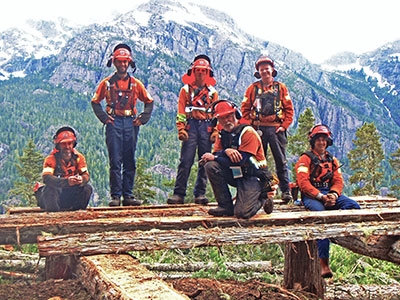