Oct. 31, 2018 – For six years now, Canadian Forest Industries has showcased the achievements and potential of young forestry leaders in our Top 10 Under 40. In order to individually acknowledge and highlight the contributions of each winner, CFI will feature one of 2018's winners every week for the next 10 weeks. 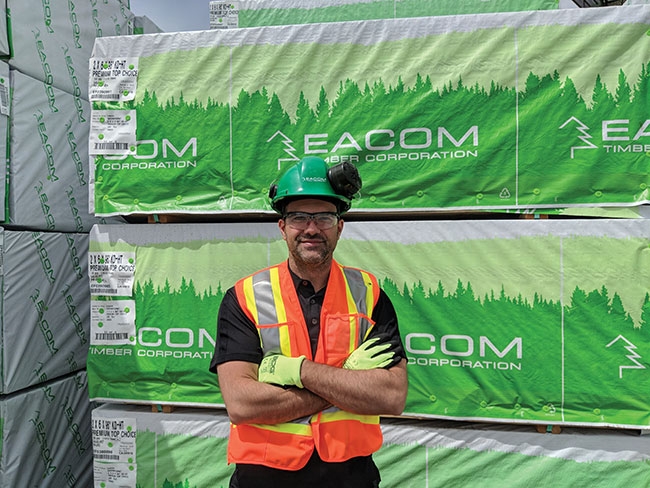 Sylvain Messier has been working in the forest products industry since he was 16 years old. His first job was in a hardwood mill in Drummondville, Que., and he has remained in the field ever since.

In 2005 he graduated from CEGEP Ste-Foy with a wood processing degree and worked with Comact in optimizing start-ups worldwide. From 2010 to 2012, he joined the Domtar/EACOM family and facilitated the transition to EACOM.

In late 2012, Sylvain started his own business to provide for more flexibility and time with his young family. The 34-year-old’s energy, knowledge, management style, and expertise resulted in strong demand and respect for his consulting services in the industry, says Wade Zammit, vice-president and COO at EACOM. Adding that these accomplishments at a young age made Sylvain an attractive prospect to EACOM.

Sylvain joined the EACOM team in 2015 as a process and optimization specialist. Within his role of optimizing EACOM’s sawmill performance he delivered operational improvements at its Ear Falls, Ont., sawmill by increasing the value output by 10 per cent and achieving a 15 per cent uplift in recovery. His numerous projects contributed to the overall team effort that increased EACOM’s production from 500 to 900 million board feet per year between 2013 and 2018.

In 2016, Sylvain’s scope of work expanded into managing capital projects and he was promoted to wood transformation expert advisor for all EACOM sawmills. He became involved in multi-year capital project planning and began managing some individual projects; most notably, the first continuous dry kiln in Eastern Canada at EACOM’s Timmins, Ont., facility.

“A very confident person, Sylvain expects strong commitment from himself and those that work with him,” Zammit says. “He does not avoid difficult situations and makes tough decisions when necessary. His knowledge and approach to people has proven to be very effective at getting results.”

In November 2017, Sylvain was promoted to corporate project and controls manager and in the spring of 2018, he took on the responsibility for all capital and improvement projects for the company. Sylvain now manages a team of 12 while pursuing a business management degree at Montreal’s HEC School of Business.

Up next: we showcase the achievements of winner Chanda Hunnie.