Dec. 27, 2018 – The view on the nutrition of forest trees was turned upside down when Torgny Näsholm showed how they can absorb organic nitrogen from the soil. He has also developed sustainable fertilizers. 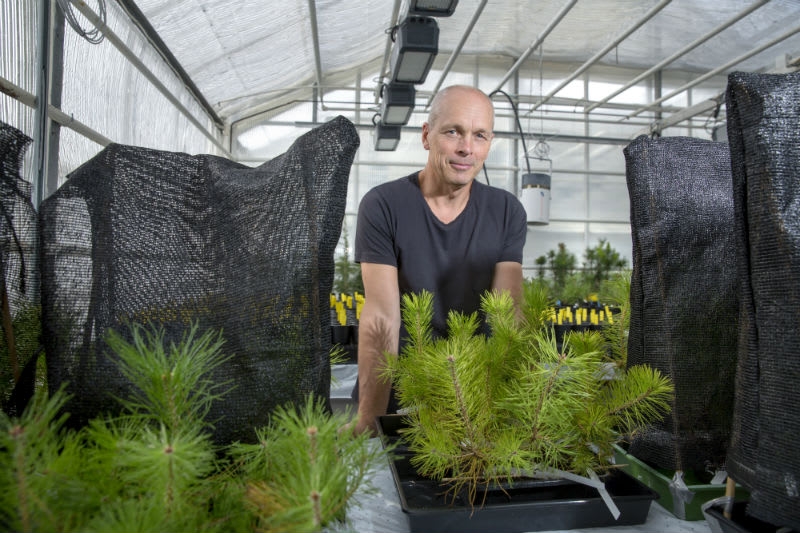 The road to success, however, was not dead straight.

It is raining and December is dark outside the Swedish University of Agricultural Sciences in Umeå, where Professor Torgny Näsholm is busy in his study. In a few days he will fly to Australia to meet colleagues conducting field studies with the fertilizer which he has developed.

A few months ago, Näsholm received the 2018 Marcus Wallenberg Prize for the discovery that pine, spruce, and other plants can take up different kinds of organic nitrogen from the soil.

The announcement took him by surprise.

“I was astonished but also very happy. The Prize is a confirmation of the research that we have been working on in my group for twenty years,” Näsholm says.

King Carl XVI Gustaf presented the diploma during a ceremony at Grand Hôtel, Stockholm, Sweden, and the celebrations continued with a reception in his honour at the residence of the Västerbotten county governor.

Reports straight from the soil
Biologists had long talked about the possibility that plants can have the capability of taking up organic nitrogen from the soil, but the evidence was never convincing. Some twenty years ago there was a new report, which did not succeed experimentally either.

Näsholm and his colleagues were intrigued by the discussion and came up with the idea to design a study on plants in their true environment.

Since then, the research group in Umeå has developed different methods, including microdialysis of the soil. Microdialysis was once introduced in medical research to monitor substances using a probe with a semipermeable membrane at the tip.

“We can make the membrane function like a root giving us continuous chemical analyses. With minimal damage we can investigate what is in the soil,” Näsholm explains.

Samples of soil were previously dug out and transported to a laboratory to be analyzed. Soil microdialysis provides different and more relevant results.

“We managed to prove that there is more organic nitrogen in the soil than what earlier studies have shown,” Näsholm says.

His research group could also describe how forest trees can take up organic nitrogen from amino acids, which turned out to be the major source of nutrition for pine, spruce, and other plants in the forest.

The researchers looked for an amino acid with a minimum of nitrogen leakage, as fertilizers can cause water pollution if they are not fully absorbed by the plants.

“We found that the amino acid arginine binds strongly to particles of soil and is the fastest of all organonitrogen compounds to be absorbed by the roots of the trees.”

The breakthrough is just a starting point
The news of the revolutionary results travelled fast. Näsholm does not, however, consider the breakthrough an endpoint, but a foundation for further studies.

He was also eager to transfer his discoveries into useful applications.

As the CEO at the company Arevo, he leads the development and manufacturing of sustainable fertilizers for different kinds of crops. First on stage was Argrow, comprised of the amino acid arginine.

Just a very small amount is required to receive a clear effect – 80 grams per hectare is enough. And it works both in boreal forests and in flower pots in Näsholm’s home.

Most fertilizers provide good growth above but not below the ground surface. This plant nutrition ensures a well-developed root system, as well as faster establishment and growth.

Näsholm admits that the discovery came at a price. Most of the time it has been fun – but not always.

“We would not have succeeded without all the mistakes along the road. We have experienced many dead ends, where we were forced to realize that we were wrong. Failures are, however, never obvious. It is often hard to know when to persist and when to let go. Sometimes it is better to give up,” he says.

He believes that their success is a result of a great teamwork with contributions of different personalities. Group dynamics can be vital for the outcome.

“It is of course tough to be contradicted, but it is also necessary to be surrounded by very critical as well as very positive people.”

Holidays on a hill farm
Näsholm grew up in a small town in the north of Sweden. Since childhood he has spent the summers at a mountain farm belonging to the family. The surrounding forests with old spruce and unique lichens are nowadays protected in several nature reserves. As a teenager, he became interested in environmental issues, decided to study biology and completed his upper secondary qualification with science.

His dissertation thesis focused on tree growth and uptake of nutrition. And yes, there was also an environmental concern.

He and his wife, Ann, live in a new villa just outside the city of Umeå, near the river, close to the outflow to the Gulf of Bothnia.

Their four children have moved to other parts of Sweden but will return for Christmas. They plan a traditional celebration with good food and hopefully ice for skating and snow for skiing.

“The family means a lot to me. In my research group we have discussed the importance of having both a job and a private life. There are times when you can work a lot, and other times when you are needed more at home. I hope my children think that I was a present parent when they grew up. I enjoyed sharing with them the experience of receiving the Marcus Wallenberg Prize,” Näsholm says.