Feb. 21, 2014 - By now, those in the forest industry are well aware of Tier 4 emissions regulations and technology. Here in North America, Tier 4 began in 1996. This was the year the U.S. government passed the first tiered laws demanding off-road heavy equipment manufacturers to gradually reduce the pollutants and particulates in engine exhaust. These laws – starting with Tier 1 and phasing through stricter and stricter Tier 2, 3 and 4 regulations through the years – will help reduce smog and acid rain, as well as associated respiratory problems.

The U.S was following Europe’s lead, where heavy equipment manufacturers were already developing emissions-reduction technologies to meet new legislated requirements. Canada entered the arena in 1999. Our federal government passed the Off-Road Compression-Ignition Engine Emission Regulations (under the Canadian Environmental Protection Act), which were similar to the U.S. Tier regulations. At the time, the Canadian standards applied to diesel engines manufactured in 2006 and after. In 2012, amendments were introduced. Danny Kingsberry, a media relations officer at Environment Canada, says that 2012 update provides Canadians with “significant benefits in terms of improved air quality and reduced exposure to air pollutants and toxic substances.”

At this point, manufacturers already must meet “Tier 4 Interim” standards for some horsepower ranges, and must meet “Tier 4 Final” by Jan. 1, 2014 for equipment larger than 175 hp. They have an additional year to have compliant equipment between 75 to 175 hp on the market.

Tier 4 tech
Here’s a summary of the two emissions-reduction systems being used:

Which technology is used generally depends on what is required of the engine and the process that the machine is intended for. CEGR is well-suited to steady engine RPMs, where fairly constant exhaust temperatures aid in the reduction of particulate matter. SCR is better for engines that must meet variable demands, such as loaders. This technology provides ongoing fresh air to the engine, allowing it to run at peak performance through the full RPM range. Full power is achievable with either SCR or CEGR individually, but CEGR uses a little more fuel (see “active regeneration” in section below).

Operation and maintenance
The development and physical cost of any new add-on technology such as SCR or CEGR is, of course, passed on to the customer. On the positive side, however – besides the benefit of cleaner air for us and the living things around us – no action is needed to manage Tier 4 technologies by the machine operator during ongoing operation.

During ongoing use of a machine with CEGR after-exhaust treatment technology, the DPF filter is automatically “regenerated” (the particulate matter in the filter is reduced to ash) in three ways. The emissions-reduction interface in the cab lets the operator know what’s occurring. ‘Passive regeneration’ occurs during ongoing operation, and ‘active regeneration’ occurs when sensors detect that particulate matter has accumulated to a certain level in the filter. Diesel fuel is injected into the exhaust to increase its temperature. Sensors also indicate when “forced regeneration” is required. The engine must sit idle while the engine control unit conducts a very high temperature cycle. The ash that remains is not combustible, and must be cleaned out. However, regulations require that this situation occur only after at least 4,500 hours of engine use, and some manufacturers claim it need only be done once or twice in the lifetime of the tractor. “Low ash” engine oil with a CJ-4 rating is a must. The only maintenance required with SCR systems is checking the DEF filter and refilling the DEF tank when needed.

Companies are touting Tier 4 equipment as the most fuel efficient ever, but that is not the whole story. Tier 4 emissions technology as well as other new technologies have helped to gain more fuel efficiency in vehicle operations. Experts point to electronic fuel injection, more efficient transmissions integrated with engine performance, and other cutting-edge electronic systems that adjust fuel usage according to many engine factors on a second-by-second basis, as having by far the biggest impact on fuel efficiency in today’s machines.

Who’s using what
Cummins Power Generation has already developed Tier 4 genset configurations that are capable of achieving Tier 4 Final. These products use both DPF and SCR technology. DEF filters have to be changed every 500 hours, notes Ananth Parameswaran, director of Cummins Power Systems and Global Marketing. “Depending upon the duty cycle of the genset, the DPF would have to be cleaned of deposited soot every 4,000 to 5,000 hours,” he says.

Most Volvo models for all sectors will use SCR and fully automatic DPF technology. “In the majority of cases, this option provides the best solution for the applications, climates and environments our customers operate in,” explains Bengt Johansson, a Volvo specialist in emissions and emission regulations. He notes that by using both SCR technology and a DPF, consumption of DEF is slightly lower.

Ponsse Oyj is using both SCR and CEGR because “it seems that will be the standard method in the industry to meet the emission level demands of the Tier 4 Final stage,” says Product Lines Marketing Manager Antti Räsänen.

Case Construction Equipment is also using both SCR and CEGR to meet Tier 4 Interim, in addition to a maintenance-free DOC-only solution used on some skid steer models that meet the Tier 4 Final standard, notes Case Solutions Marketing Manager Brad Stemper. The use of multiple technologies will continue as Case progresses toward Tier 4 Final across all equipment categories and horsepower ranges.

John Deere is another company using both main emissions-reduction technologies to meet Tier 4 Final. The firm’s G-Series Motor Graders feature their own PowerTech engines and “Integrated Emissions Control” systems, configured CEGR, DOC, DPF and SCR. There are 12 models in the G-Series, with horsepower ranging from 220 to 287. Six of the models feature six-wheel drive, enabling them to power through the toughest cuts with power flowing to all wheels.

Tigercat and FPT Industrial have partnered to supply Tigercat FPT Tier 4 engines, which feature SCR technology. The companies say this allows the engines to meet required emission levels without the need for variable geometry
turbochargers or a higher-capacity cooling system.

Not all companies are ready to publicly discuss their Tier 4 technology, and some like Komatsu are still developing systems for their forestry equipment.

Whatever companies do decide to go with, emissions reduction technology is good for both us and the planet, but will be added to the cost of new equipment going forward. 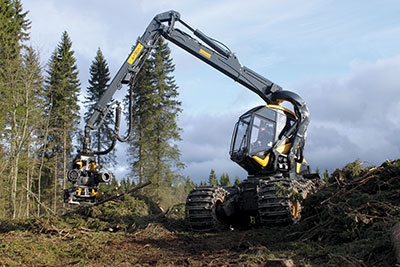 By now
Print this page