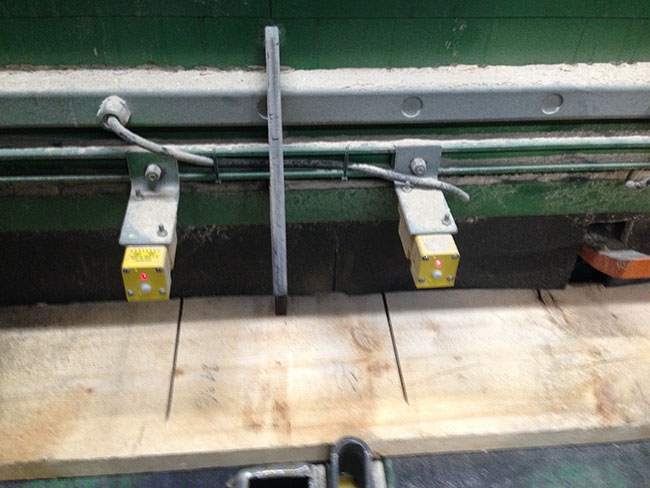 A completed storyboard is stopped directly below the trimmer photoeyes. The optimizer only knows what we tell it.

If a fence position or a specific saw combination is not defined in the optimizer, then it will not be used to make a solution. As you can imagine, the accuracy of the mechanical parameters is crucial for proper optimization. To gain a better understanding of how to manage the mechanical parameters of an optimizer, we will begin by focusing on the process of making a storyboard and how it is used to determine the saw positioning in a trim box.

What is a storyboard?
A storyboard is essentially a board that tells the location (story) of the saw positions in the trim box. In particular, a storyboard is a full-length board that has been passed partially into the trimmer saws while all the saws are running and forced in the “down” position; resulting in sawcuts at each saw location (Figure 1). This process is more accurate than measuring the physical saws using a tape measure and is what Autolog recommends for determining accurate saw positioning.

A completed storyboard is stopped directly below the trimmer photoeyes.

Are storyboards required for movable saws (precision end trim)?
Since movable saws are constantly verified and adjusted throughout a production shift in order to ensure a precision end trim product (PET), it is not necessary to make a storyboard for verifying saw positions. But, it is still necessary to check the default trimming on zero saw (0’ saw position relative to the 0’ fence) and enter this value in the optimizer. Also it’s still necessary to properly set the photoeyes.

How can this be managed better?
Saws and other trim box components (saw arms, shims, cylinders, belts, guides, etc.) are changed relatively frequently. Therefore, it can be assumed that the positions of the saws are going to be altered slightly on a regular basis. To manage these frequent saw position changes, Autolog recommends the following:

It is difficult to determine exactly how much impact a difference between optimizer saw positions, actual saw positions and photoeye positions have on production. But, we can tell you that the impact is real. Our team at Autolog will gladly help you complete the storyboard process, but continual verification from mill personnel will be required in order to reap all the benefits. This can be either easy money gained or easy money lost, but that will be up to your mill to decide.

Sheldon Ong is a member of the Process Expert Group for Autolog.

Billy Freeman is a former member of the Process Expert Group for Autolog and now in process improvement at Harry Freeman and Son Ltd. in Greenfield, N.S.