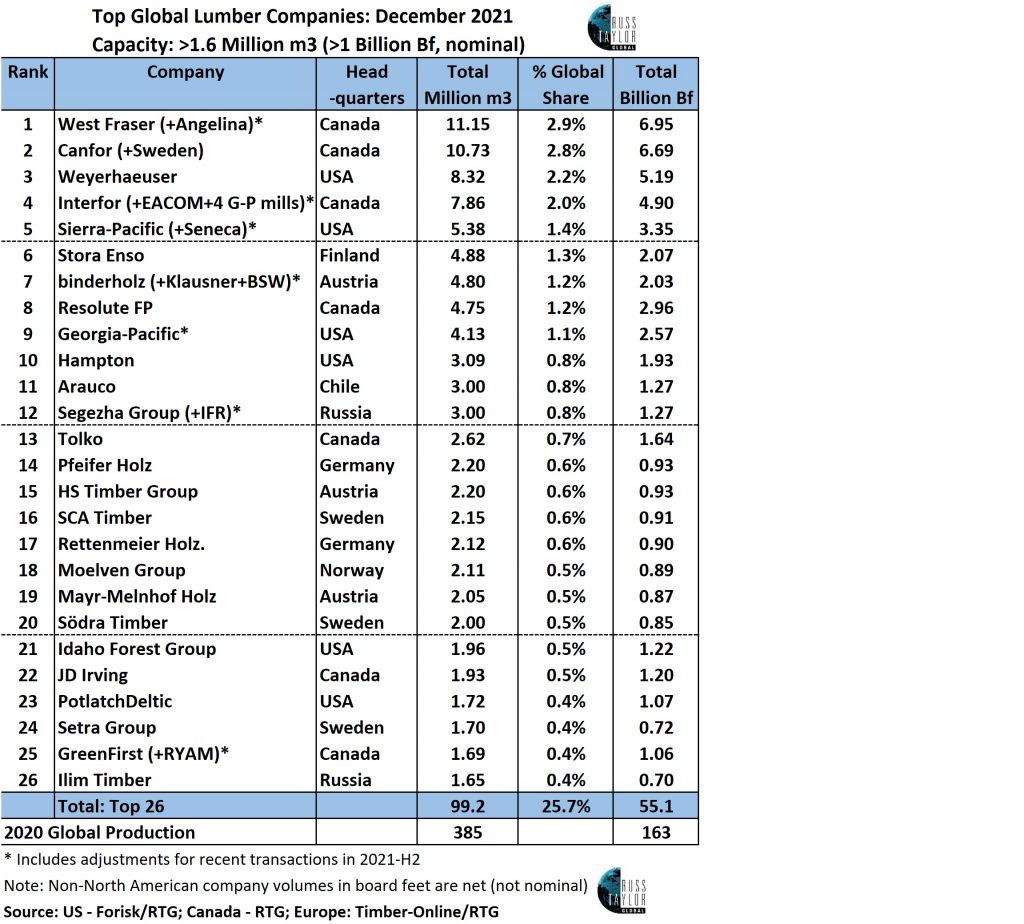 With lumber companies being flush with cash from record prices in 2020 and 2021, there continues to be several new acquisitions and expansions in the global lumber business. Assuming all the announced transactions are completed, an update of global sawmill capacities provides some insight into the scale of the top companies at the of 2021. There are now 26 companies that have lumber capacities more than 1.6 million cubic meters (or greater than about 1 billion board feet – nominal).

The order of the top global companies remains largely unchanged, but there are a few major exceptions. The top five companies are led by #1 West Fraser (which is also the largest OSB producer), followed closely by #2 Canfor (including its Swedish mills), #3 Weyerhaeuser, #4 Interfor (with its recent acquisition of EACOM as well as four G-P mills), and #5 Sierra-Pacific (with its acquisition of Seneca). Each of these behemoth companies have more than 5 million m3 (3 billion bf) of lumber capacity.

Stora Enso at #6 has 5.38 million m3 of lumber capacity with mills throughout nine countries in Europe as well as Russia. Moving up quickly in the ranks with capacity of 4.8 million m3 is #7 binderholz headquartered in Austria with the strategic acquisitions of the two ex-Klausner sawmills in the U.S. South and BSW’s seven sawmill sites in the U.K., one in Latvia and seven other production sites in the UK.

Achieving the 3 million cubic meter threshold is #12 Segezha Group, a very strategic Russian company that has been on a buying spree and recently acquired a major Russian competitor, LLC Inter Forest Rus, which in turn comprises 24 forest industry assets, including some world-class sawmills, and a substantial forest resource base in Siberia.

The other new entry to the list is #25 GreenFirst Forest Products that acquired the six sawmills from Rayonier A.M (RYAM) in Ontario and Quebec, and previously had acquired one additional sawmill in Ontario.

Thirteen of the top 26 companies are based in North America, with the three of the top four based in Vancouver, B.C. Eight of these North American companies have mills in both Canada and the US. In Europe, there are four to five companies just hovering at or below the 1.6 million m3 threshold and they should make the list soon.

The table of the top 26 global companies is only available at: www.russtaylorglobal.com/articles. Sign up on our website to get all reports automatically.