Industry News
Will a new SLA be more restrictive?

April 22, 2016 - The next agreement on softwood lumber between Canada and the United States will not happen this year, and if the past is any indication of the future, the agreement may be even more restrictive than the last, Carl Grenier, lecturer at the National School of Public Administration (ENAP) and Université Laval told attendees at the Montreal Wood Convention.

Grenier criticized the recently expired Softwood Lumber Agreement (SLA) signed in 2006, calling it the worst agreement made by Canada.

"The direct costs of this agreement totalled $4.7 billion for the industry,” he said. “Of that amount, one billion was paid to U.S. industry by the Canadian government.”

According to forecasts, free trade should prevail at least half the time when lumber prices are quite high. But since 2006, prices have almost always been low and free trade has prevailed only 23 per cent of the time, as was the case in 2014, Grenier said.

In compiling the history of commercial timber trade between the two countries, Grenier noted some trends. Among others, every time that Ottawa has gone the way of the courts to challenge the alleged "dumping" of the Americans, the Canadian government has prevailed. With greater political will, Canada could get away with much better deals, he told the crowd.

For 10 years, little effort has been devoted to preparing the ground for a new agreement, while $23 million was spent to promote Keystone XL, he adds. Without strong political will, Grenier believes the next agreement on softwood lumber will be more restrictive.

One glimmer of hope, however, is for Quebec, which finds itself in a better position than New Brunswick 30 years ago to ask to be excluded from this agreement.

The question is whether the U.S. government will see the situation the same way. 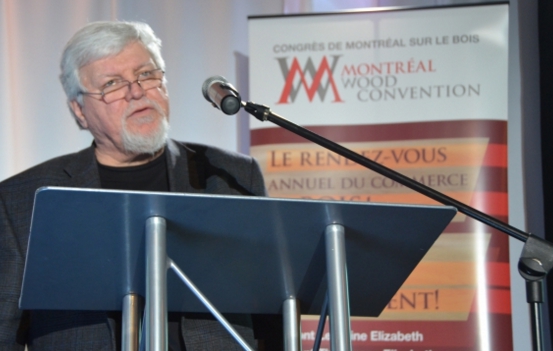