February 22, 2016 - The major global event in 2015 was the devaluation of most exporting countries’ currencies against the U.S. dollar (and, to a slightly lesser degree, the Chinese renminbi). These plunging currencies created some major competitive advantages at first (i.e., at the same U.S.-dollar price, exporters could pocket the difference). The situation was short-lived, however, as most major markets (including China, Japan, Europe, the Middle East/North African countries and Canada) were experiencing flat growth. The only major market that showed sizeable demand growth in 2015 was the U.S. — about 4.5 per cent. As a result, most exporters were searching for the markets that would provide the highest margins for their respective currencies. This became a race to the bottom: U.S. dollar prices crashed in most major export markets as exporters gave away their currency exchange-rate gains in order to hold onto market share given the lower prices. The net result has been a global mess marked by too much supply versus demand. It does not bode well for 2016. 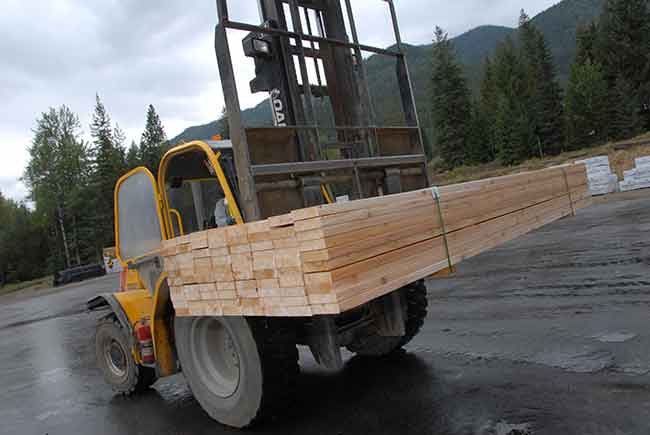 In the U.S. The major global event in 2015 was the devaluation of most exporting countries’ currencies against the U.S. dollar

In Wood Markets’ new five-year forecast, the short-term outlook is that North American and global economies, as well as softwood lumber and panel markets, are all forecast to improve, but at a much slower pace than has been expected. What has also short-circuited the prospects of stronger demand is a slowdown in the key export markets of China and Japan. In considering all of the major global factors, the outlook now expects more lacklustre demand and corresponding slow price growth through 2017. After that, it starts to look very good! As usual, there are many change factors at work that will create unpredictable swings in lumber supply, demand and prices in 2016 and beyond. The following excerpts from Wood Markets 2016 — our five-year solid wood products outlook (covering 2016–2020) — address some of the major lumber market changes expected in the next two years.

Global demand
Total global softwood lumber consumption in 2014 recorded a gain of 3.1 per cent over 2013, attributed mostly to gains in U.S., China, Europe, and some Middle Eastern/North African countries. The U.S. was the only major market to achieve any substantial consumption growth (+6.5 per cent) in 2014. For 2015, the outlook is for a more modest global increase in softwood lumber demand of 0.8 per cent to 309.7 million m3 (131 billion bf net, or 192 billion bf nominal). Each of the major regions except China and the U.S. is likely to show a zero to small demand increase in 2016, with the U.S. increasing by four per cent; China is being affected by a negative outlook tied to weak construction industry fundamentals and an oversupplied housing market.

Global supply
For 2015, global softwood production trends should mirror their consumption counterparts — expanding by only 1.0 per cent to 313.5 million m3 (133 billion bf net, or 195 billion bf nominal). For 2016, global production is forecasted to grow by 1.6 per cent to exceed 318 million m3. A continued rebound in North American production (to supply the expanding U.S. housing market) will have the largest influence on global production in 2016: a gain of 4.8 per cent is called for in the U.S., with slightly negative production for Canada as the impact of the mountain pine beetle supply creeps in (coupled with weak markets in China). European production should finally get going as well: an increase of 5.5 per cent is forecasted for 2016 (after just 2.9 per cent in 2014), based largely on improving export markets and some growth in the domestic market. The wild card in 2016 and beyond will be the health of export markets in Asia (including China and Japan), the Middle East and North Africa, i.e., in terms of their ability to absorb the extra production volumes.

North American demand
On the demand side, the key U.S. market has had some steady growth in the repair and remodeling and industrial sectors, but it has been the slow and steady pace of the new residential housing construction market segment that has underwhelmed lumber and OSB producers. U.S. housing starts have been growing annually at only 10 to 15 per cent the last two years (reaching 1.12-1.14 million starts in 2015), but from very low levels. There is still a long way to go to get back to a more normal level of 1.5 million housing starts, so there is still some huge upside. Wood Markets’ previous forecasts, and our current one, continue to hold to the belief that a structural change has been occurring in the U.S. housing market that will take much of this decade before a “new normal” result emerges. As evidence, our conservative 2015 housing starts forecast from last year’s 2014 report should almost exactly equal 2015 final housing numbers. Stocks of both new and existing homes have retreated to historically average levels, but house prices continue to move up in many markets and this is slowing sales. Even with this expected slow growth rate of new-home starts, however, the market is expected to get very active starting in 2018!

Based on improved housing starts and strong gains in R&R, industrial and commercial applications, it is likely that lumber consumption (led by new U.S. residential construction) will continue to accelerate from the levels achieved in 2015. Total U.S. lumber consumption is projected to rise strongly, moving from 44.1 billion bf in 2015 (nominal, or 70.8 million m3 net) to 47.1 billion bf in 2016 and to almost 50 billion bf in 2017. In Canada, total apparent lumber demand has rebounded this year to an estimated at 8.2 billion bf; the slow growth expected going forward should take the figure only modestly higher through 2017.

the housing and job markets continue to improve

North American supply
The supply-side dynamics feature eroding sustainable timber harvests in key provinces in Canada (B.C. and Quebec), resulting in dramatically lower lumber production than in the previous decade. Canada’s total lumber output will start to flatten out by 2018 with no further increases expected – just as U.S. and global demand are expected to gain momentum.

On the U.S. side, the U.S. West Coast region continues to watch log export prices in China and Japan, as many domestic log prices continue to be correlated with export prices – this can quickly
tighten the wood supply for sawmills and plywood mills when export prices rise. The U.S. South is forecast to be the only region where significant incremental lumber and panel production will occur, mainly due to its ample and under-utilized timberland base of southern yellow pine. Low log prices in the South and expansions in sawmill capacities (including the new ownership pattern of Canadian companies) have enabled southern mills to earn some of the best lumber margins in the world since 2010. As lumber and panel demand increases, it is forecast that the current depressed log prices will start to move higher to feed incremental wood consumption of the expected additional panel and sawmill production.

Total North American production continued to expand in 2015 as a result of growing demand in the U.S. Unlike in 2014 and previous years, a slowdown in export markets in 2015 reduced offshore exports, and then currency devaluations and rising housing starts caused North American imports to increase; this led net trade to be reduced by 650 million bf. An element to watch as the market rebounds will be the industry’s schedule for adding incremental lumber production, as a mix of extra mill shifts, mill renovations, new mills, or the opening of some curtailed mills could disrupt both the market and prices. It is expected that imbalances between supply and demand will occur at times — especially after 2016 — resulting in periods of price volatility (both higher and lower, depending on the timing).

Canadian exports to the U.S. (and offshore), however, should begin flattening out after 2017 due to a lack of incremental sawlogs for harvesting — therefore, less lumber production. This tightening supply will occur as U.S. housing starts begin to accelerate, increasing both supply and price volatility.

Starting in about 2017, total production capacity in Canada is projected to flatten out as declines in the B.C. Interior balance gains in the rest of Canada. The likelihood of rising U.S. lumber demand and recovering export markets bodes well for higher U.S. lumber prices. There is still potential for a severe tightening of North American timber supplies and sawmill capacities, but this is not anticipated until late 2018 or 2019 in light of slower U.S. and global demand trends. However, improved housing starts (note: many economists are calling for much higher levels than our forecast shows)or increased lumber demand could push this to occur earlier.

Offshore imports of structural lumber could play an increasing role over the next five years, as European lumber imports could start to increase, given the devalued euro and generally lower delivered log costs. (Of note, Sweden’s currency has devalued more than the euro in 2015, and Sweden’s exports to the U.S. are already up by 90 per cent in 2015 versus 2014.) In addition, as a result of a late-November windstorm (Gorm) making more lower-riced salvage logs available to the industry, even more lumber is likely to enter the U.S. market in 2016.

Price trends
With European lumber demand coming back slowly and North America’s housing recovery anticipated to accelerate at times, more softwood lumber demand should be the net result, leading to a tightening of the supply chain. However, the trends in China’s economy and construction markets are still keys to driving global export demand, as is a steady market demand in Japan (note: both markets need to be more stable to allow for improved global prices). Furthermore, the political volatility in the MENA countries needs to stabilize to enable export growth (particularly for European and Russian exporters).

The slower pace of growth in U.S. housing in 2015 and a slowdown in export markets have acted together to more than balance incremental production with supply, leading to a weaker market scenario and prices this year. We are forecasting 1.235 million new-home starts in 2016 — not enough to cause any substantial change in North American lumber prices, especially with China and Japan on the sidelines — but foresee a stronger housing market in 2017; in combination with stronger global demand, this could be a catalyst for higher prices. Also, with U.S. housing starts expected to get closer to 1.45 million units in 2019, there is a distinct possibility of escalating U.S. lumber prices (assuming the whole demand cycle is in gear again in both the U.S. and global markets).

As export markets faltered and global currencies devalued against the U.S. dollar in 2015, U.S. demand became over-supplied relative to available supply, and prices tumbled for most of the year. From an average price of US$349/Mbf in 2014 and a much lower US$276/Mbf in 2015, W-SPF 2×4 is projected to achieve only a very slight increase in North America in 2016 — in U.S.-dollar terms.

The longer-term outlook calls for rising European lumber exports to the U.S. to help balance out flat Canadian supply, but higher prices are required; this is not expected to occur in any meaningful way until 2017, as the threshold price gets to the level needed to assure more sustained lumber supply to the U.S. Consequently, gradually rising prices are called for in our five-year outlook.

Summary
While there is expected to be a steady tightening of the global softwood timber supply base, slow demand growth continues to prevent the potential of any shortages from appearing. However, there is still a very possible supply gap in timber and sawmill capacity that can occur – especially in North America – that could drive prices much higher. However, the pace of demand is still the limiting factor, but it is possible to see the first signs of a major supply imbalance by 2018-19 – still a long way out as a result of the conservative Wood Markets demand forecast.