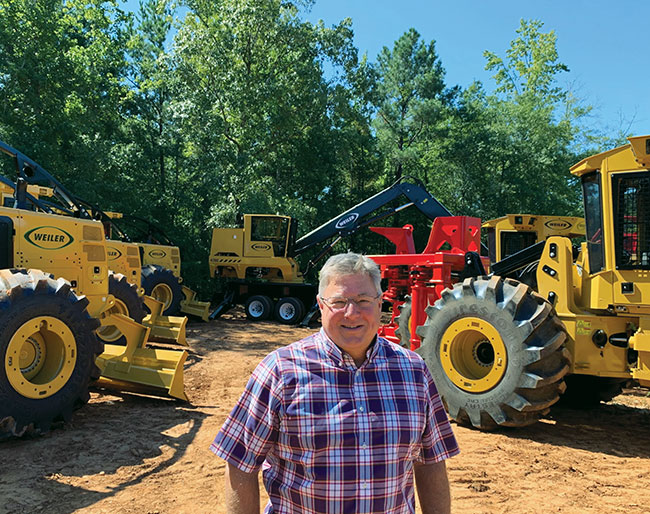 According to Dirk Nielsen, territory manager for Weiler Forestry, Pat started out by selling paving products to compliment the Caterpillar line.

“Caterpillar has their own paving line – the bigger size machines – and Pat basically filled that out, with agreement and alignment from Cat, and sells only through Cat dealers, using Cat components wherever possible,” he says.

“In his close relationship with Caterpillar, Cat Forest Products started the conversation of perhaps manufacturing a couple forestry models to ease the small volume and niche product requirements that the purpose-built forestry business requires. The scope of this discussion eventually turned into the purchase of the business and the facilities from Caterpillar.”

Focusing on the smaller in-woods forestry and mill yard business segments was ideal for Weiler.

“The profile of the forestry customers fit closely with Weiler’s own profile of a family business that likes to keep things simple and efficient,” Nielsen says.

Over 200 employees work for Weiler Forestry worldwide, and Caterpillar dealers sell and support their machines in more than 10 countries, Nielsen says.

In Canada, Weiler Forestry machines are available and supported exclusively by Caterpillar dealers Toromont and Finning.

“Those dealers offer the best customer support and industry expertise in all segments they serve, and have been selling and supporting Weiler paving products for 10-plus years,” Nielsen says. “They are now selling Weiler forestry products, which will complement their Cat forestry offering, and give them the broadest line of forestry equipment on the market.” 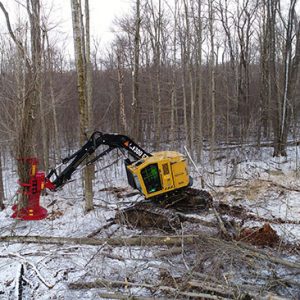 The Weiler B458 working the hardwood hills of Pennsylvania. 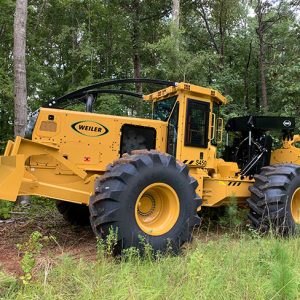 A growth opportunity
Pat Weiler has also traveled to and met with multiple customers across Canada.

“We see Canada as a significant growth opportunity. We understand there are harsh operating conditions due to climate and terrain, and also heavy-duty cycles and long hours put on equipment. Customer feedback along with these conditions drives us to design efficient and reliable equipment to hold up to the toughest demands,” Weiler says.

And since September, the forest industry has welcomed Weiler’s entrance into the sector.

“I think people are always looking to try something new,” Nielsen explains. “I think forestry customers in particular are open to trying something new. I go to different job sites and there can be multiple brands of equipment.”

In this industry, relationships with dealers and manufacturers is critical, Nielsen adds.

“I think there is a lot of trust in Caterpillar dealers because of the size they are and the strength that they have supporting customers. So, I think it’s been good, the fact that a new brand is entering the market – but a new brand that’s tied to Caterpillar and tied to that history too.”

Although the transition from Caterpillar to Weiler products is still ongoing, Nielsen says it’s been very positive so far. The customers they have met with across Canada are excited about Weiler Forestry’s product line and the new products that they plan to introduce.

But, like any company, Weiler Forestry has been impacted by COVID-19.

“These are certainly trying times, and the wellbeing of Weiler employees is first and foremost. Thankfully, the manufacturing sector is an essential service, so Weiler has been able to continue to serve our customers and dealers worldwide,” Nielsen says.

“There are challenges with supply chain from some vendors, and there have been minor impacts on efficiency; however, Weiler continues to manufacture machines and deliver parts all over the world.”

Despite the difficulties posed by COVID-19 and the downturn in the B.C. forest industry in the last year, Canada is a significant opportunity for Weiler Forestry, Nielsen says.

“With strong and committed dealerships in place working hand-in-hand with Weiler Forestry, Canada will be a growth opportunity. Weiler had planned launching a couple of new forestry models at DEMO 2020 in Ottawa/Gatineau, which was unfortunately delayed to September 2021. But the new models will still be released this fall and Weiler will continue to focus on offering more models for the Canadian market,” Nielsen says.

When asked for a hint about the new models, Nielsen says that the company is looking at expanding their track feller buncher and track harvester offerings.

There are even more new products to come, of course, but forestry workers will have to wait till September to learn more.

In the meantime, the company is focused on product improvements to meet customer needs and increasing manufacturing flexibility.

“Weiler Forestry is working diligently and efficiently, focusing on our forestry customers to address product needs and provide solutions to make their jobs easier and more profitable,” Weiler says.