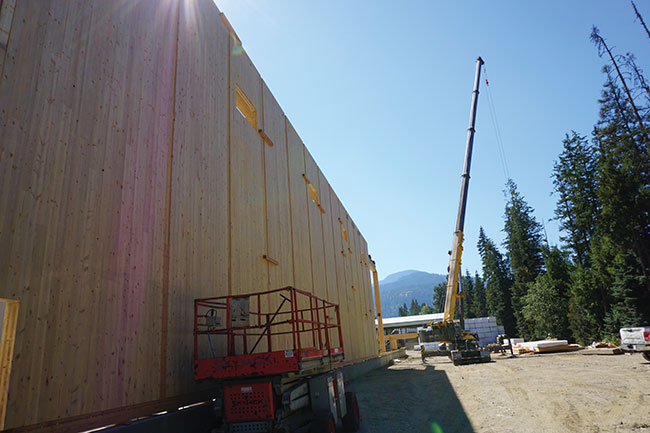 Expansion of the mass timber plant is ongoing to create a new 20,000 square feet extension of the existing facility.

The Kootenays in southeastern British Columbia is home to beautiful colossal snowy peaks, crystal-clear lakes and some of the best cat- and heli-skiing in North America. It is also home to Kalesnikoff Lumber, a thriving, multi-generational family enterprise that keeps innovating and evolving.

What started as a small logging operation in 1939 by Russian immigrant brothers Koozma, Peter and Sam Kalesnikoff became a custom sawmill, and by late 1960s, the company added dry kiln and planing capacities. Peter’s son, Pete Jr., joined the workforce and mentored his own son, Ken, who then got involved in the family business. The Kalesnikoffs innovated again and in 1999 built a remanufacturing plant that produced lineal pattern products such as moulding, siding and interior paneling.

In August, Canadian Forest Industries joined Chris and his team for a tour of Kalesnikoff’s woodlands in the Kootenay Range, and its mass timber and sawmill facilities in Thrums, B.C., next to the majestic Kootenay River.

In 2014, Chris began looking to expand the business into mass timber, even travelling to Europe to learn more about cross-laminated timber (CLT), where it was developed in the 1990s. He visited mass timber facilities and equipment manufacturers to get a better understanding of the process, before going all in.

“CLT has been used across Europe for the past two decades and we have to give credit to the companies there for how open they are in sharing their knowledge,” Chris says.

Construction on the $36-million mass timber facility began in 2019 and it came online in the summer of 2020. Now the plant produces mass timber panels that come in up to 60-foot lengths and glulam beams that have been transformed into residential, commercial and industrial spaces, as well as educational institutions all over the U.S. and Canada.

“We love seeing our mass timber turn into places where the next generation of children will grow,” Chris shouts amid the rhythmic humming of the two production lines running in three shifts. Kalesnikoff employs 250 people at both their sawmill and mass timber facility.

“To be able to run three shifts in under three years is a great feat. In 2019 when we broke ground, we had designed and hoped to expand the facility to support our customers and growing mass timber market. We are beyond excited to be achieving this milestone less than three years after producing our first products,” Chris proudly tells CFI.

The 110,000 square-foot building houses both the glulam and CLT product lines. Denmark-based Kallesoe Machinery was the main equipment supplier, providing presses, as well as the CLT and glulam systems that move the mass timber through the operation. Most of the other suppliers are from Europe, which have been at the forefront of mass timber technology.

In Canada and the U.S., adoption has been slowed down by code restrictions and a negative public perception, but it is gradually changing.

“People are continuing to warm up to mass timber construction. In the early years, developers were nervous to use mass timber with questions and concerns about fire, construction costs, installation strategies, and more,” Chris explains. “But as more CLT buildings are completed in North America, the public is becoming more comfortable with the product and more aware of its benefits.”

Across North America, the interest in mass timber is fuelled by the increase in the maximum allowable height for wood buildings in the U.S. to 18 storeys, while Canada allows mass timber structures up to 12 storeys high.

The future looks bright, as according to the B.C. government, the growing mass timber sector will support more than 4,000 jobs in manufacturing, technology, forestry, design, and engineering, and bring new jobs to communities throughout the province.

In fact, people are confident enough about adopting mass timber that construction on the expansion of Kalesnikoff’s mass timber plant is ongoing. In August, the company started the installation of glulam timber trusses and CLT walls, creating the structure for the new 20,000 square feet extension of the existing mass timber facility.

Chris proudly shows CFI the ongoing work on the expansion.

The trusses involve some structural teamwork, with steel giving a hand in tension to complete a span of over 76 feet, explains Leigh Schmidt, design technician at Kalesnikoff. When complete, the expansion will be an excellent example of the potential that mass timber holds for industrial, long-span applications.

Currently, the state-of-the-art facility is able to produce 50,000 cubic metres of finished product a year, with the capacity to expand upon that. Chris says about 25 per cent of the products stay in B.C., while the rest are sold in other parts of Canada and the U.S. 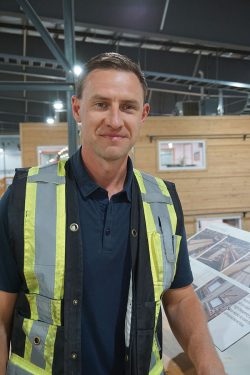 The process and integration

Kalesnikoff says it is able to offer stability to its customers because it is North America’s most advanced, fully integrated multi-species mass timber company – from planting the seedlings, to processing lumber in their sawmill, to the mass timber they produce.

“It is important to be price competitive while having a reliable supply. We address that by being fully integrated,” Chris says as he leads the way through the factory’s manufacturing floor, while explaining the production process.

The sawmill team grades the timber and kiln-dries it to precise specifications before transporting it to the world-class mass timber facility less than 10 km away from the sawmill.

The timber is then re-scanned and artificial intelligence is deployed to grade each board for geometric tolerance, visual appearance, moisture content and strength. Any defects are then removed with an automated crosscut saw before the timber moves to the horizontal finger joint line, where it is assembled into long lamellas up to 60 feet in length. The lamellas are sorted and stored in curing trays until they are required downstream in the pressing lines, where they will be manufactured into cross-laminated timber panels or glulam beams.

The press lines can produce panels up to 60 feet long, 11.5 feet wide and 14 inches thick. The facility is able to cure up to four metres of CLTs at a time in as little as eight minutes, and can complete an entire 60-foot panel in 35 minutes. Panels are then transferred directly into a CNC machine for final fabrication and then finish-sanded on both faces.

The glulam beams from Douglas-fir, spruce and hemlock follow a similar process: stacking, gluing and pressing long-length lamellas together. Kalesnikoff can cure up to six-metre segments in four to six minutes per cycle. The high-frequency technology allows for faster curing times and more consistent adhesion compared to traditional cold press methods. Beams travel automatically to a cross-cut saw where they are trimmed to final length, then move through the four-sided beam planer for milling to finish size. Exiting the planer, beams travel through a grading station to be inspected before moving to the finishing area, then to the CNC machine for full fabrication to the x, y, and z axis.

Like the rest of the country, the B.C. forest industry is facing the challenge of labour shortage. Luckily for Kalesnikoff, the West Kootenays is a sought-after destination, not to mention the popularity of the mass timber sector among young people.

“We’re in the exciting segment of the industry – mass timber is cool – CLT attracts highly-sought people from other industries,” Chris explains, adding that the cultural and lifestyle changes that prompted city exodus during the pandemic benefitted the company’s hiring process. In fact, at the height of the pandemic, Kalesnikoff created and filled almost 100 jobs that included highly skilled positions. Presently, the average age of employees at Kalesnikoff is between 30 to 40.

To secure the industry’s future, it is important to inspire and encourage young people, says Chris, who along with his sister Krystle, was a past recipient of CFI’s Top 10 Under 40 award.

As for Kalesnikoff’s own future, Chris says the family business would very much welcome the next generation of Kalesnikoffs – each of the fifth generation would be a welcome addition to the family operation.