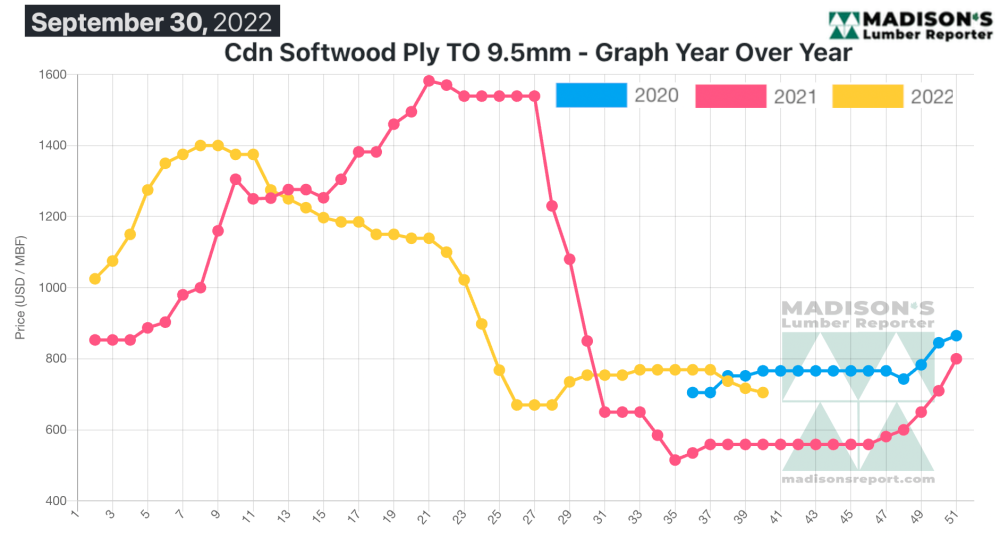 The normal seasonal slowdown for construction and building activity in autumn brings a drop in lumber prices. However it is unknown how much impact rebuilding after the recent very severe storms along the east coast of North America, both on the Canadian Atlantic provinces and for the U.S. south, will have on looming lumber demand therefore prices. Given that currently the devastation is still being assessed, it can be assumed that the need for lumber in the next few months will be greater than it normally is heading into winter. Thankfully there is a significant amount of production volume available to come online, as quite a few sawmills have been taking curtailments and downtime in recent months.

Order files at sawmills were into the weeks of October 10th or 17th, but as mentioned prompt material could be found with ease by motivated buyers.

“Demand for lumber and panel was unmoved as yet, as horrific storm systems lashed Atlantic provinces and states this week.” — Madison’s Lumber Reporter 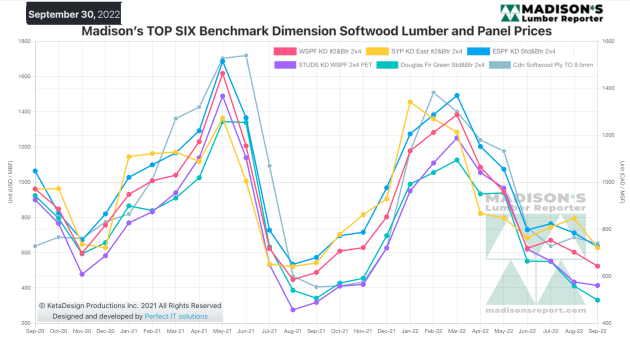 The Western S-P-F market was flat to slightly down this week. Buyers were already distracted and wary about new purchases in the face of waffling prices, rising interest rates, and overall inflation. Hurricane Ian’s reign of destruction through Florida and other Southeastern states gave them further pause. Both primary and secondary suppliers had available on-ground stock, further reducing urgency from customers who needed to plug holes in their lean inventories.

The Western S-P-F market closed out September not with a bang, but a whimper according to suppliers in Canada. Prices of R/L dimension items were level or off between $15 and $43, with #2&Btr and #3/Utility wides taking the biggest tumbles. Buyers continued to lean heavily on the distribution network, happy to take advantage of aggressive secondaries competing with each other to keep their inventories lean of slow-moving items. Order files ranged from three weeks out to prompt, with plenty of the latter apparently showing up on a day-to-day basis – especially in 2×4. Supply of wider offerings was more sporadic.

“Sales of Eastern S-P-F commodities started on a listless note this Monday, especially compared to the strong finish observed late last week. Eastern Canadian sawmills tried to stay firm on their asking prices. Buyers were active in spurts, and sales volumes were again on the low side in most cases. Caution reigned as the week wore on and players’ attention was often diverted by persistently dire economic indices. Supply appeared to be ahead of demand, but not by much. Producers did their best to hang on to last week’s numbers. Several dimension items slipped between $5 and $50, with low-grade falling hardest. Knock-on effects of post-tropical cyclone Fiona have yet to reach the lumber market after that storm dealt catastrophic damage to Canadian Maritime provinces, causing at least three fatalities.” — Madison’s Lumber Reporter