If you were at the Truck Loggers Association (TLA) convention in Victoria, B.C. in mid January, you may have thought the province’s coastal forest industry had returned to prosperous days of the past. 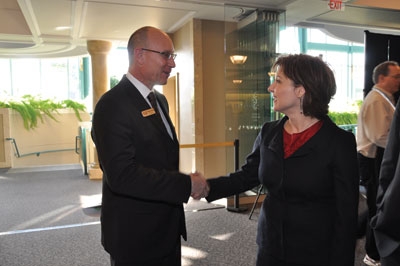 Almost 1,300 attendees took in the two-day event, which was held at the Victoria Conference Centre and the Fairmont Empress Hotel. And unlike the subdued crowds at other recent TLA conventions, this time around it was all smiles as speaker after speaker talked of new markets in China and improved balance sheets for loggers and sawmill operators.

“I believe the great success of our 2011 convention reflects the growing optimism regarding the future of the coastal forest industry,” said Glen Kappel, convention committee chairman for the TLA, which is an industry association representing loggers on the B.C. Coast and Vancouver Island.

This year’s event, which was the 68th annual TLA convention, was also a political “who’s who” as it was one of the final public appearances by outgoing B.C. Premier Gordon Campbell. Three of the six candidates vying for Campbell’s job took part in a “Natural Resources Forum” at the convention, while other candidates for the province’s top political position made cameo appearances on the trade show floor, including Christy Clark, who emerged as the winner in the race and was sworn in as B.C.’s 35th Premier on March 14th.

Other sessions at the convention included a session on the supply chain and whether a now watered down B.C. forest industry can meet the potential upswing in the markets. The TLA’s executive director Dave Lewis, weighed in on the topic, along with longtime Vancouver Island logger Mike Hamilton, Interfor’s Ric Slaco and John Stulen of the New Zealand Forest Industry Contractors Association.

“The TLA is extremely optimistic about the future product demand picture for coastal B.C. operators, however, there are some serious supply chain issues that need to be addressed if we are going to be able to deliver on that demand,” cautioned Lewis. “Our convention addressed both demand and supply issues and how to ensure that we are fully prepared for the market recovery.”

The TLA’s Education Donor Fund was a big winner at this year’s convention as a live auction at the annual suppliers’ night raised over $78,000 for the cause. Ritchie Bros. Auctioneers provided their services for the event, and the funds raised will help forestry education programs in coastal B.C.

The TLA will return to Victoria again next year for its convention, which will be held from January 17 to 20.