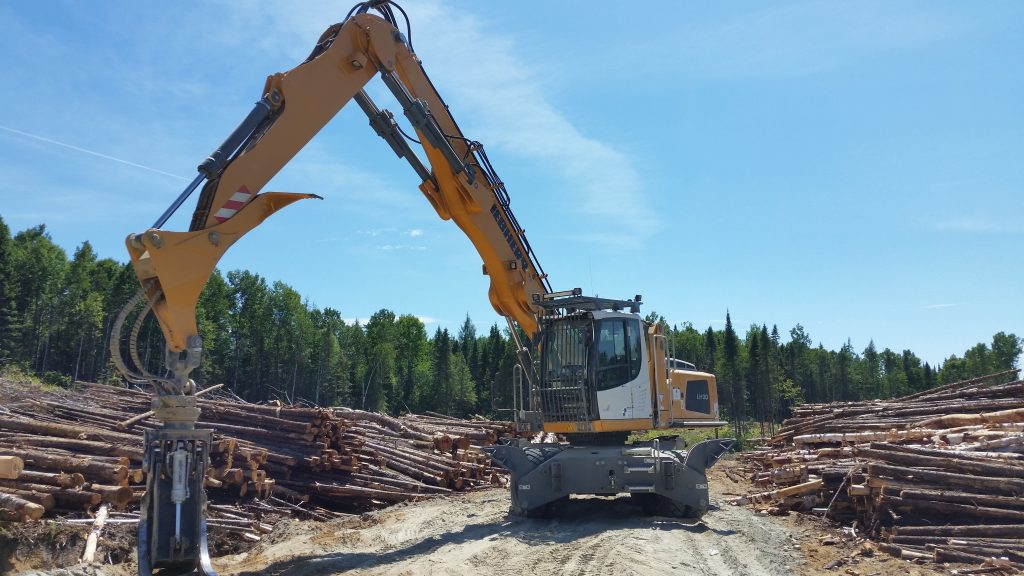 “My father was a truck driver for 48 years,” Langevin says during an interview in the Ottawa Valley, a couple hours away from his base of operations in the Maniwaki, Que. area.

His father hauling logs for nearly half a century has certainly had an influence on Langevin’s choice of careers. At 17 years of age, Langevin began working in the construction sector as a dozer operator. He worked in the industry for five years operating dozers and wheeled excavators before deciding to join his father in the forestry sector working as a feller buncher operator. Langevin worked in the bush for two years before switching to operating a log loader for another company. Shortly after the switch, an opportunity came knocking in 2016.

“My dad and the CSEG co-op [Coalition of forest entrepreneurs of the laurentians and outaouais] in Maniwaki was looking to buy a log loader but they needed someone to run it,” Langevin says, adding that the co-op ended up financing the purchase of the equipment to help get his company, Chargement LL, up and running. “Once the machine is paid off, it’s mine.” 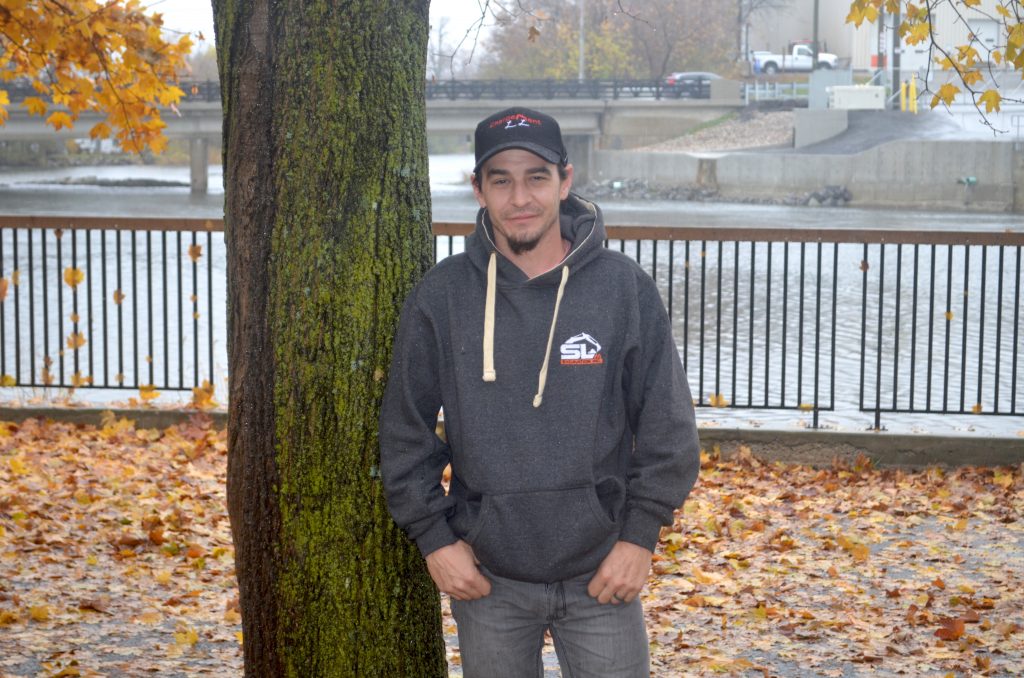 Luc Langevin started up Chargement LL in 2016, after an opportunity presented itself for Luc to finance his own equipment.

“The co-op ordered it, and I knew right away this was the right machine,” he says, adding that other manufacturers couldn’t offer him the options he wanted; such as the hydraulic thumb.

Langvein has operated the Liebherr LH 30 for three years now. The only significant issue that came up over that time was a problem with the diesel exhaust fluid (DEF), but he says Liebherr worked with him to rectify the problem.

Langevin loads a variety of softwood and hardwood that is harvested in the Réserve faunique La Vérendrye area, located between Maniwaki and Val-d’Or, Que. The spruce logs and much of the other softwood species go to Resolute Forest Products’ sawmill in Maniwaki; the maple, poplar and other hardwood species go to Louisiana-Pacific (L.P.) in Bois Franc; and the white pine sometimes goes to Low, Que. in the Outaouais Region.

Chargement LL typically runs 24 hours a day, five days a week with two operators. Sometimes the company will load through the weekend during the wintertime. Photo submitted.

Langevin’s loader typically operates 24 hours a day, five days a week, with the help of a second operator.

He typically loads all year round with the exception of spring breakup, when he performs as much planned maintenance as possible.

“We try to push it as much as we can, but usually stop around April 10,” he says.

One of Langevin’s favourite things to do while loading logs is to challenge himself to see how quickly he can load a truck.

“You always want to load your truck faster, get as many loads as you can in 12 hours,” he says, adding that loading trucks comes with its challenges, like having to sort through a variety of species while trying to keep efficient loading times. “It’s not only putting logs in the trailer. Sometimes we’ve got five different woods, sometimes one wood.” 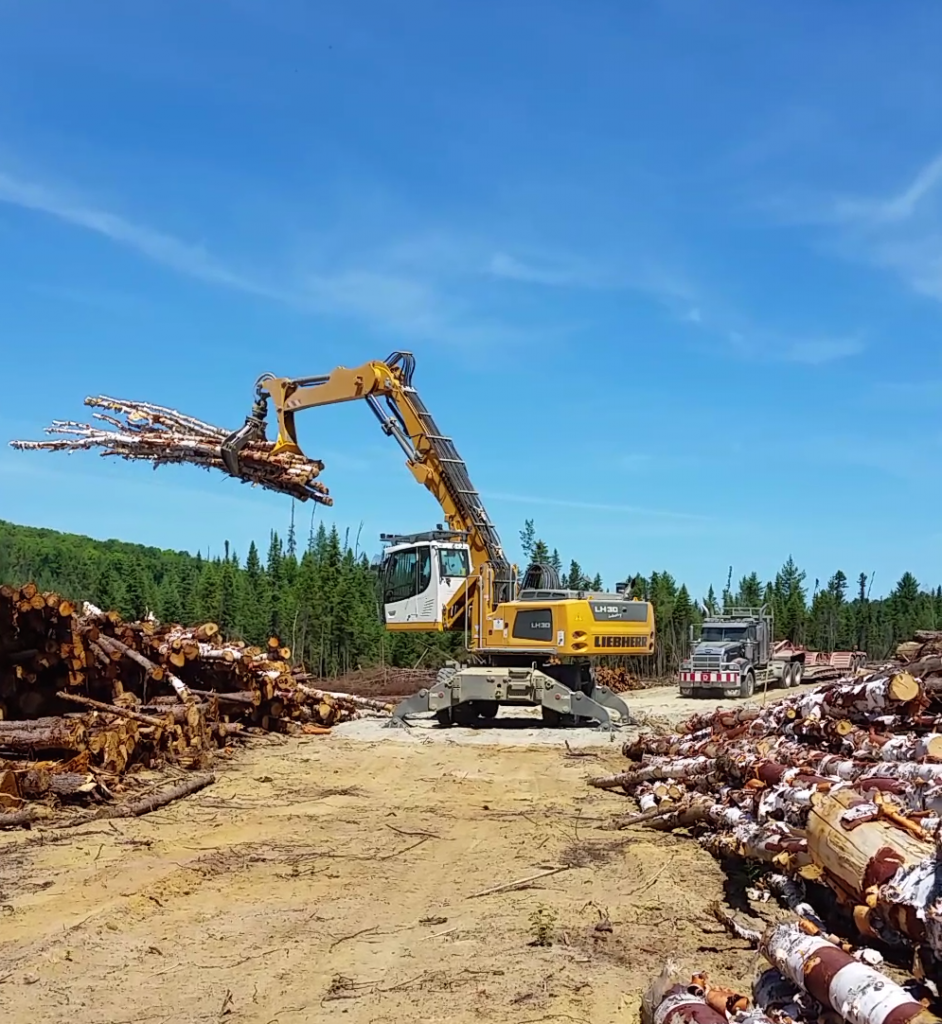 Luc Langevin regularly separates his loads into five different species of softwood and hardwood. Most of the softwood goes to Resolute Forest Products’ sawmill in Maniwaki, Que.; while the maple, poplar and other hardwood species go to Louisiana-Pacific (L.P.) in Bois Franc, Que. Submitted photo.

As far as future goals go, Langevin does see potential for a small expansion in his business.

“Maybe I’ll get another machine if things go well in the future,” he says. “I don’t want to be huge. I just want to stay like this.”

Langvein says the idea of becoming a manager that spends their time overseeing a fleet of machines and a bunch of employees isn’t something that really appeals to him.

Chargement LL is very much a family affair. In addition to potentially bring his son, Andrew, into the family business one day – who is only eight month old at the moment; Langevin’s girlfriend, Jessika Charlebois Morin, does all the administration work; and he regularly exposes his nine-year-old daughter, Maélie, to the forestry sector.