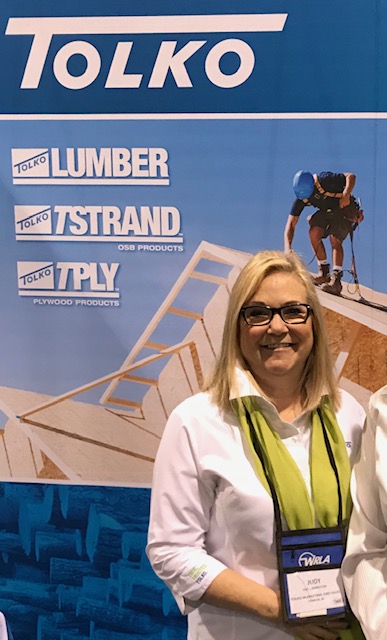 Judy Johnston is a plywood sales representative for Tolko Marketing and Sales in Vernon, B.C. She has been in the forest industry 43 years. Her resolve to advance in the industry in spite of traditional gender roles helped pave the path for future women in forestry.

CFI: What led you to begin your career in the forest sector?

It’s interesting to look back actually, from being in the mill and doing mill stats to woodlands logistics, sales assistant and then trader for 28 years.

I started out my career as a licensed insurance adjuster living in Vancouver. In 1977 my husband and I moved to Kelowna. And in the insurance industry here it was all men. It wasn’t going to fit. I had a personal employment agency find something for me and it was in the sawmill office. In those days it was Crown Zellerbach.

My father-in-law had been in the industry his whole life and I was not unfamiliar with it. I grew up in North Vancouver and logging was big in our area.

CFI: What was the industry like back then? Did you face any challenges as a woman?

Once I got into the industry, I ate it up. I kept looking at positions that were not traditionally female and saying, I’d like that one. They’d say, no, no, you just go that way, but I kept looking where I wanted to go and trying to get there.

So I can’t tell you how many men I trained for jobs that I sought after. But eventually, through help from HR – I would not have been able to get in as a trader without HR – I got what I wanted and I haven’t look back.

I see it changing now, but in my career, it was very much a boys’ club. Whether it’s being invited to things outside of work or even inside work, I didn’t get those invites. You had to do it on your own. There were no mentors for me. If anything I was blocked and discouraged.

If I didn’t have a supportive husband who didn’t see gender roles, I would never have been able to do what I did. I had lots of friends around me who’d say, oh, my husband wouldn’t let me do that. And I’d say, wait a minute, listen to yourself! What do you mean let you?

I’d say my husband was my mentor. That was unusual for our day. He was very much supportive, which was awesome for me.

In the U.S. there were quite a few women traders back then, but very few in Canada. I’m happy to say that it’s turning around now. But it should have turned around two decades ago.

CFI: What does the industry look like for women now and what changed?

It’s a whole new generation. The reason it’s opened up here in my department is because we have a VP of sales and marketing, Pino Pucci, who doesn’t see gender; he sees achievement. So many changes have happened from his views alone. And we have a VP of human resources, Tanya Wick, who is just outstanding and opening all kinds of glass ceiling opportunities. They have levelled the playing field.

The industry is starting to see what they’re missing through diversity. The creativity and different views, whether it’s female views, youth, older people, you need that diversity to see all ideas. If you have just one viewpoint and you get complacent and that’s not good for business.

Tolko has been very proactive in bringing in a lot of women in maintenance, the mill, woodlands, or in the office here, and promoting those opportunities.

CFI: What advice and encouragement do you have for women starting out in the industry?

Find an advocate, first thing. And just do it. Push ahead. If you want it and that’s where you want to go, get there. Use all the human resource assistance you can.

Don’t listen to someone who says you can’t do that. It’s the same in life anywhere for any young person. If that’s your dream, get there.

I’m a pretty proud mother of two women who are very high up in their jobs as well and when they look back they can say, ‘What is all this fuss about? We never knew we couldn’t do whatever we wanted to.’ I’m pretty proud of that.

The rewards for working in the forest sector are good living. It’s a community. Ninety per cent of a mill community is made up of soccer coaches, baseball coaches, hockey coaches, whatever. There’s a really tight community aspect to our industry.

When you learn about the industry and see that it is such an umbilical cord to everything we do, you sit up and take pride in it as well. It’s becoming an industry that recycles, reuses, refurbishes. It’s not afraid to spend its own money to educate the public on how to make our end products go further, because we need to protect what’s in the ground right now.