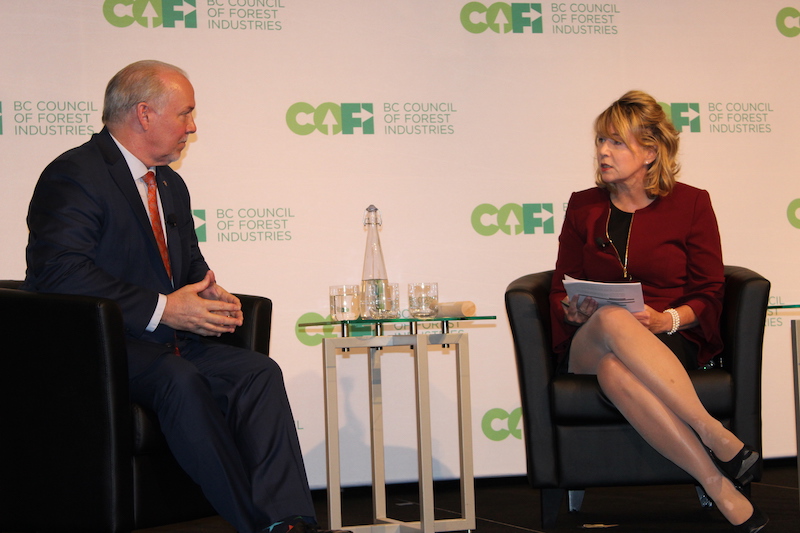 “Forestry is at the heart” of the B.C. economy, Jock Finlayson, executive vice-president and chief policy officer for the Business Council of B.C., told 675 attendees at the B.C. Council of Forest Industries (COFI)’s annual convention in Vancouver from April 3-5 at the JW Marriott Parq Vancouver Hotel and Conference Centre.

Following a recent economic study by COFI, which found that the B.C. forest sector employs 140,000 jobs across the province, it’s no surprise that speakers at the convention emphasized the need for greater co-operation between industry, government and First Nations, and shared concerns about the current geopolitical pressures impacting the sector.

Minister Donaldson also reported on amendments to the province’s Forest Range Practices Act, which were brought to the legislature earlier that week. “The intention is to ensure the public is well-informed, leading to more support for the forest sector,” he explained.

More support for the forest sector was a common theme throughout the three-day conference.

During a discussion with deputies, John Allan, Deputy Minister for the Ministry of Forest, Lands, Natural Resources Operations and Rural Development, outlined the work the ministry has done in the past year, including implementing the Coast Forest Sector Revitalization Initiative. So far, the ministry has changed BC Timber Sales’ management structure and established fibre recovery zones.

He called on attendees to voice their concerns about the program with the ministry: “We don’t want any unintended consequences with the coast revitalization program.”

Beth MacNeil, Assistant Deputy Minister for the Canadian Forest Service, also emphasized co-operation between industry and government. Under Budget 2019, the federal government has committed $251 million to forest programming over the next three years, and one-third of this funding is going to B.C., she said. Much of this investment will go to exploring value-added wood products, such as bioproducts.

During his keynote address, B.C. Premier John Horgan re-affirmed the provincial government’s commitment to the forest sector, announcing a new initiative to address the issue of competitiveness in the B.C. Interior.

The government will facilitate conversations among leaders, including local chiefs, mayors, and CEOs in an effort to determine what the issues are and how to solve them. These discussions will take place “TSA by TSA,” with the aim of finding ways to create more value from a dwindling fibre basket. “The process is evolving, not prescriptive,” Premier Horgan emphasized.

“It is absolutely vital if we’re going to continue to have a vibrant forest industry that we work together,” he said.

Other speakers were also very optimistic about the opportunities mass timber and value-added projects present.

Bart Bender, Interfor’s senior vice-president of sales and marketing, presented an update on the mass timber market during the markets update panel. Non-residential mass timber will give the industry access to significant market shares currently occupied by steel and concrete, he said.

Since 2013, the number of mass timber projects built or in design in North America has risen from five to 487, he added. As an environmentally friendly alternative building product, with 11 facilities currently producing mass timber and another five recently announced, the future looks bright for mass timber.

“It’s a great time to be in the lumber business and the forest products business,” Don Demens, president and CEO of Western Forest Products (WFP), told the crowd during the CEO panel.

During this panel discussion, the CEOs fielded questions on topics including the impending caribou regulation, partnerships with First Nations and recent production downtime at sawmills.

When asked about the downtime, Ted Seraphim, president and CEO of West Fraser, explained that shifts were reduced because of the mountain pine beetle’s impact on capacity. The company has invested almost $600 million to modernize its mills in B.C., to get more value out of the wood, but predicts more capacity will still come out of the forests.

Don Kayne, president and CEO of Canfor, agreed, adding that the beetle will eventually run its course, but until then, Canfor is looking at opportunities to get more value-added products.

For WFP on the B.C. Coast, the picture is a little different. WFP reduced shifts to “ensure we can still be competitive on a global scale,” explained Demens.

These companies have also been expanding outside of B.C. (notably, Canfor acquired Swedish sawmill group VIDA Group). But Kayne reassured the room that “our commitment to B.C. is significant.”

“To keep up with customers, we have to grow,” he said. “On a long-term basis, with B.C. as our base, we needed to diversify.”

During the markets update panel, West Fraser’s vice-president of sales and marketing, Chris McIver, said that we will see continued growth in the consumption of lumber in North America, but B.C. will continue to shrink. The only area that will see growth on the supply side is the U.S. South. Consequently, in the mid- to long-term forecast, McIver predicts a shortage of lumber in North America.

Therefore, export markets will be key, but markets like China and Japan are not as secure as they once were. The Japanese government is now providing subsidies for their own forest products, which has led to increased competition, explained Don McGregor, WFP’s vice-president of sales and wholesale supply. As a result, Japanese imports of North American hemlock has decreased by 50 per cent.

Yet Douglas Fir imports remains strong in Japan. Kevin Pankratz, Canfor’s senior vice-president of sales and marketing, added that Japan will continue to be a key market because 57 per cent of the country’s care facilities are wood-based, and hotels – which are also wood-based – are expected to grow as the country experiences a boom in tourism.

Meanwhile China continues to be the second largest importer of lumber products from Canada, regardless of current political tensions, Pankratz said. (Story continues below gallery.) 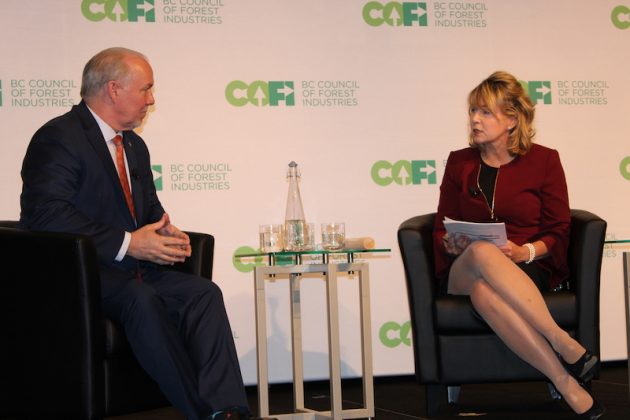 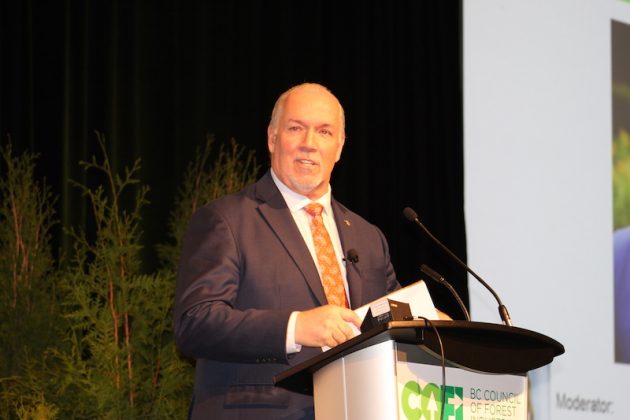 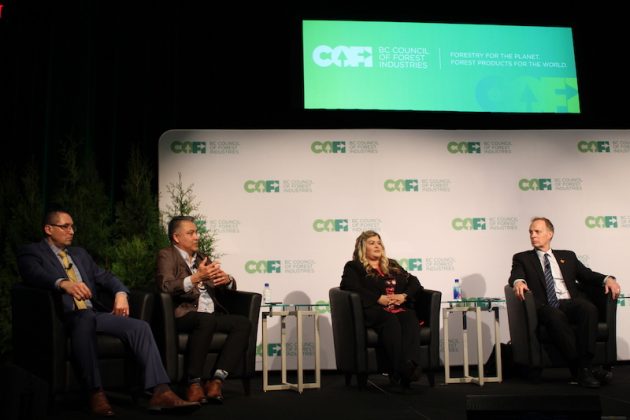 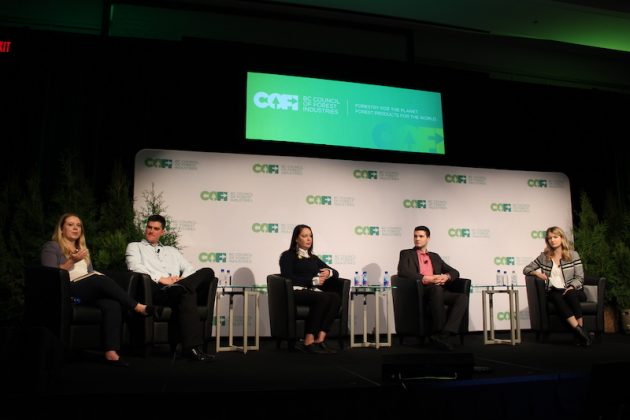 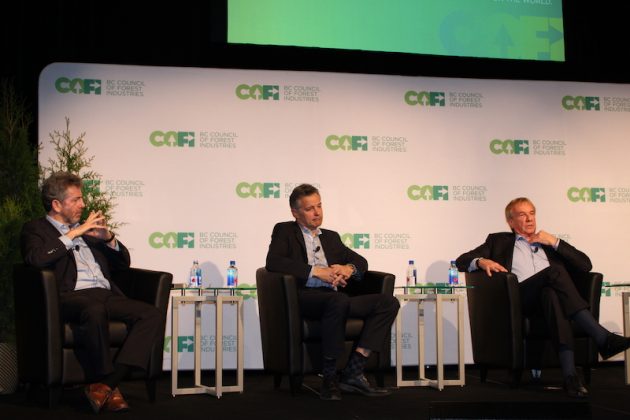 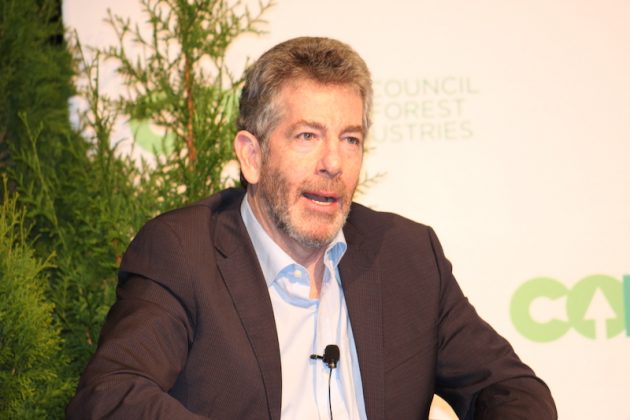 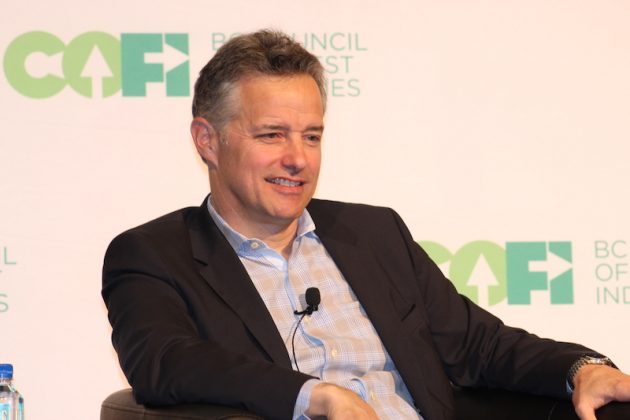 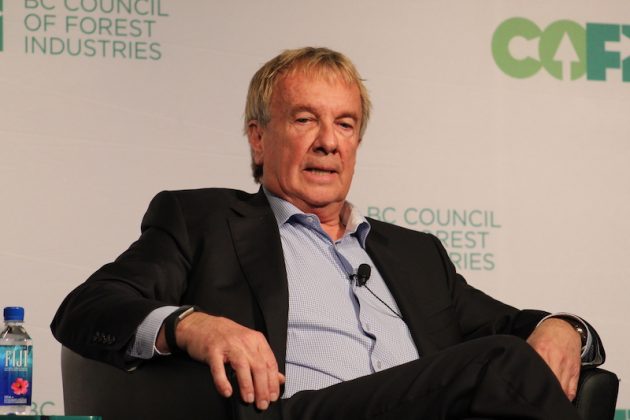 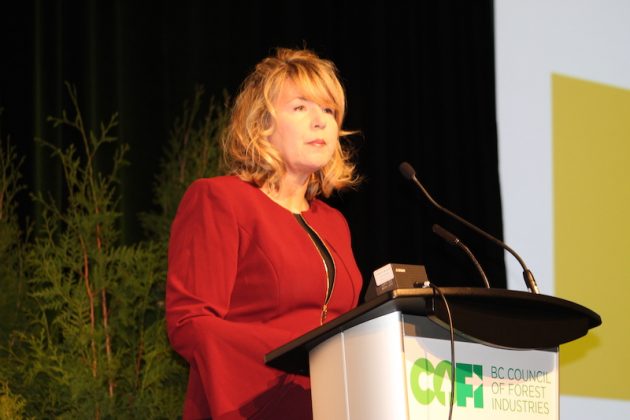 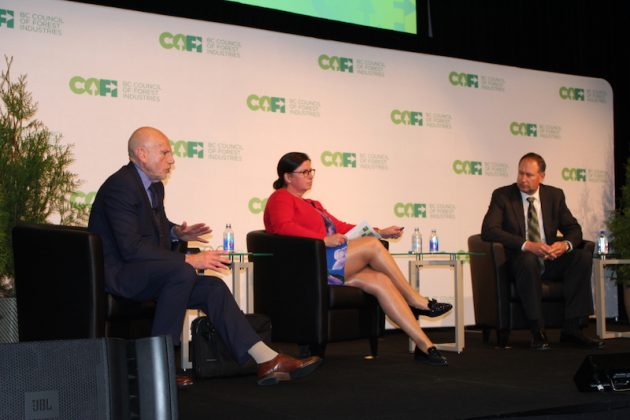 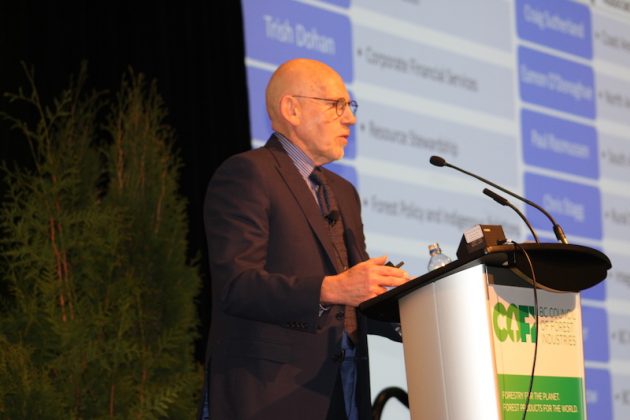 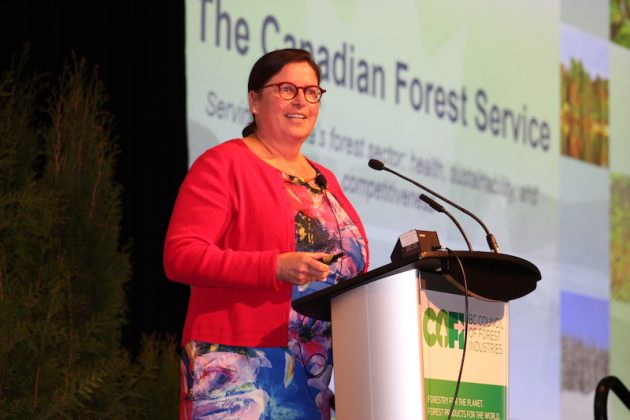 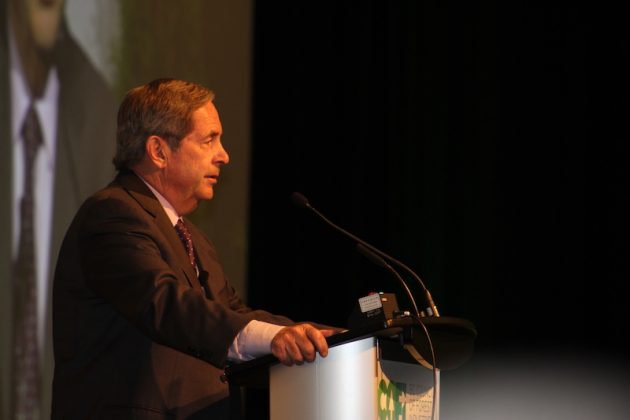 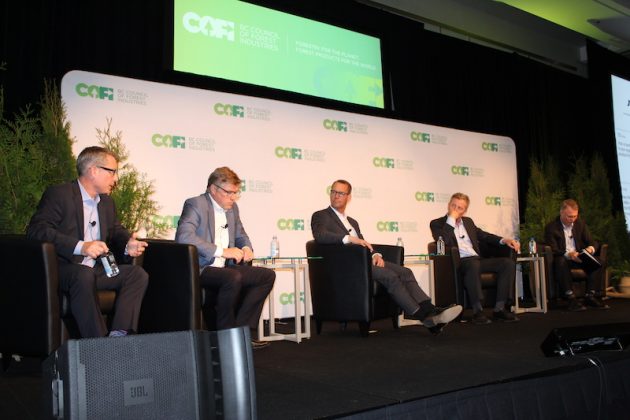 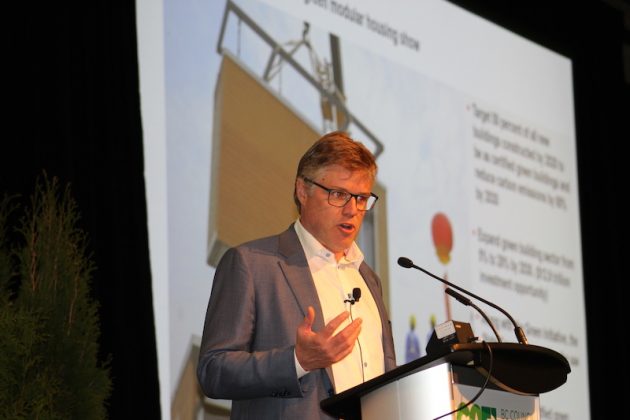 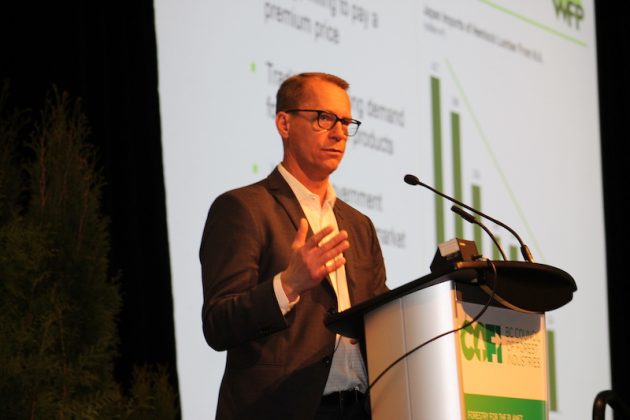 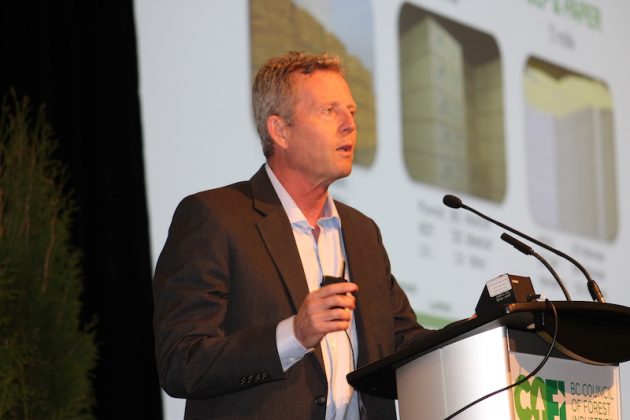 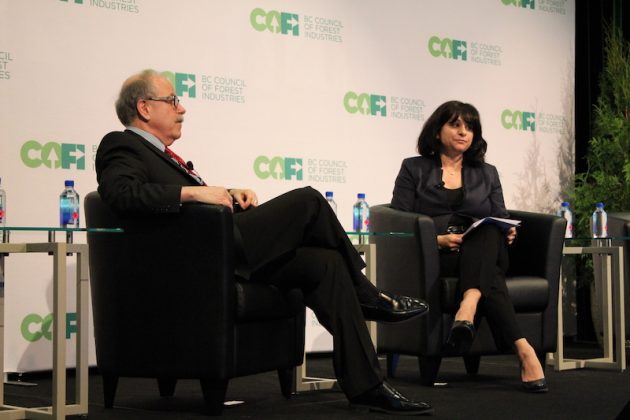 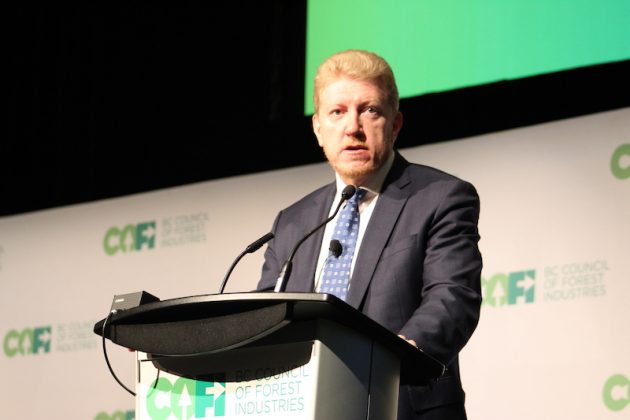 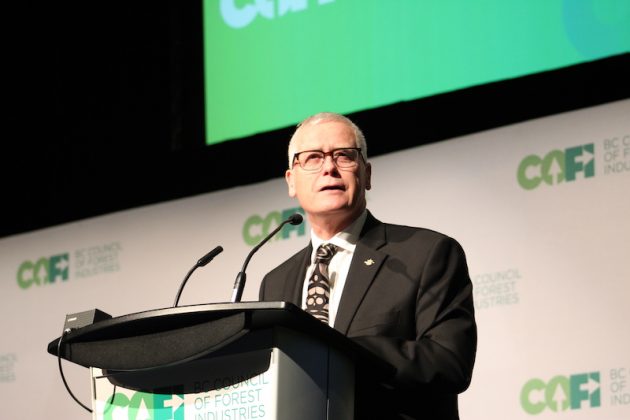 Regardless of these opportunities, the industry is facing a lot of uncertainty. According to Robert Johnston, managing director of global energy and natural resources for the Eurasia Group, intensifying tensions between the U.S. and China is weakening the commodity outlook.

There are “bumps ahead,” for the Canadian economy, agreed Finlayson, who provided an economic review and outlook for Canada and B.C. Nationally, there has been a slowdown in residential real estate activity, but solid job creation and low unemployment. The Canadian economy is also struggling when it comes to export growth, growing at an average of 2.5 per cent annually compared to the six per cent global average.

Provincially, B.C. has outperformed the country in the last few years when it comes to exports, thanks to the forest sector. “Forestry remains the core of the B.C. economy, generating 33 to 38 per cent per year of merchandise exports,” Finlayson said.

However, the ongoing softwood lumber dispute presents further challenges for the province and country, opening the door for increased competition and alternative pricing. In his keynote address, Canada’s ambassador to the U.S., David MacNaughton, spoke extensively on the dispute, explaining that while they were unable to reach a negotiated settlement as of yet, he is confident that the courts will rule in Canada’s favour.