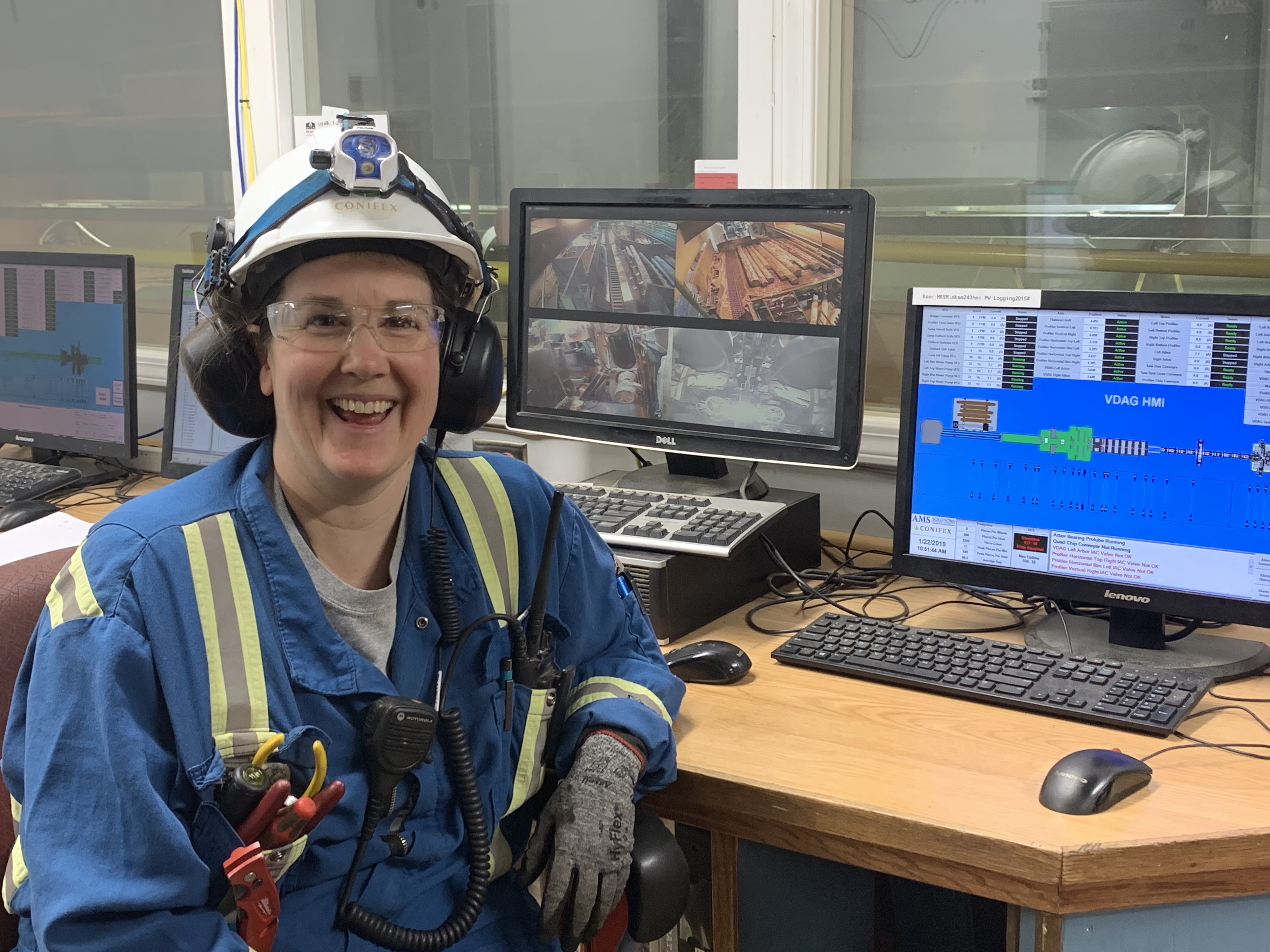 Jillian Pritchard is a newly ticketed electrician with Conifex Timber in Mackenzie, B.C. At 29 years old, Jillian decided it was time for a 180-degree career change from liberal arts to the trades. Nearly three years into her job with Conifex, Jillian says she is both lucky and grateful to have taken that leap of faith.

CFI: What led you to become an electrician in a northern B.C. sawmill?

I couldn’t tell you the exact year, but I basically decided I needed a career change at about the age of 29. I had gone to arts school so I have an ambiguous liberal arts degree and was living in Vancouver. I was working in not the most rewarding or high paying jobs and with the cost of living there I decided it was time to get realistic.

My brother is also an electrician and at the time was starting his own business, and he said, ‘Why don’t you become an electrician?’ It was kind of a light-bulb moment for me.

Long story short, I went to school in Calgary and ended up working in construction for the better part of my electrician apprenticeship. I knew that construction wasn’t a long-term plan for me. It’s hard on the body and most of those jobs are in metropolitan centres unless you’re doing camp work. I was trying to figure out how to get into an area of the trade that would be a long-term career solution for me.

My brother lived in northern B.C. and when I got into the trade I knew I wanted to live up here. I was done with the city and I had nothing to lose. I ended up meting my husband at some point during my apprenticeship. He’s an electrician too and he lived in Mackenzie, which is not too far from Burns Lake – the area that appealed to me. It was an auspicious event!

It just so happened that Conifex was looking for electricians. I’ve been with them for roughly two and a half years now. I lucked out with them and I’m very grateful.

CFI: How do you like it so far in the forest products industry?

I love it. I knew that I wanted to get into a maintenance type of job where you are doing more troubleshooting and thinking on your feet. It’s a never-ending learning curve. When you decide later in life that you’re going to change your career path, you’re accepting that feeling and you learn to love that learning curve.

My job on a daily basis is continually learning and thinking on my feet. It’s exhilarating.

CFI: Is it rare to see female electricians in the sawmill?

I’m not sure, but I want to say no. We have seven or eight electricians in the sawmill and three of them are women, so those are pretty good odds. That might be because we are living in a more remote community so there are more opportunities for women to get into these positions.

We have a female journeyman welder, we have two female planermen. So there are quite a few women in the trades here. There is definitely a larger percentage of male tradespeople, but it seems to me that it’s fairly balanced here.

CFI: Were you apprehensive at all about being a woman in predominantly male trade and industry?

I’m an optimistic person and I don’t want to believe that those issues are still prevalent, but I think it would be stupid to say that they’re not around. I came into the forest industry having entered into a trade that is also a very male-centric job, so maybe I was already hardened to it or learned to not see it so much.

There still are stereotypes and there can be a double standard at times when people question you a bit more, maybe. But I don’t think about that very much. If I did I would be upset about it everyday and I’m not. You just have to move on and get along.

People might think it’s more male-dominated than it is. There are a lot of women just in our sawmill and in administration and management at Conifex.

CFI: Did you have any mentors or role models in your journey so far?

I’ve very close with my brother and this is all his fault essentially! I was a suburban kid growing up in Vancouver. If you asked me 25 years ago what are you going to be doing, I definitely wouldn’t have told you, A, that I would be in the trades, and B, that I would be in the forest industry in some small community in northern British Columbia. There is no way! He definitely encouraged me in a very pragmatic sense.

I think a lot of people in more metropolitan areas don’t realize there is this whole other country out there and, especially in primary resource areas, there are great jobs. You make some sacrifices, you’re not in a big city anymore, but you’ve got low cost of living, high wages, and great quality of life.

My brother made those changes before I did and he paved the way for me. He made it very appealing. He didn’t really prepare me for the extreme shock of that career change, but he definitely encouraged me!

CFI: What advice can you share with other women looking to change careers and get into the forest industry?

What do you have to lose? There are so many opportunities here in these specific facets of our economy in this country. These jobs are rewarding, they’re high paying and there’s room for growth. Somebody is going to do it, why shouldn’t it be you?

Take the risk. It will be rewarding in the end. I’m sure I’m not the only person who was at that point, realizing that their career didn’t work out the way they planned and they’re stuck in Vancouver paying ridiculous amounts for rent and transportation, wondering, where is this going? There are opportunities out there.

If I can do it, anybody can!