Aug. 28, 2014 - A log’s value can evaporate in the kiln but there are some tricks to prevent checks and shrinkage.

For products measuring four inches wide or more (floors, panelling, etc.), a comparison chart shows how to identify components that are difficult to dry.

This table on the right shows something quite surprising: the most stable species (going by the heartwood) for wide components is the Jack pine. However, the Eastern cedar can also be very stable if it undergoes smart sawing with the heartwood centred, since tangential shrinkage is low.

Balsam fir and white pine are the worst species when in the form of small logs. In reality, the problem with these species is not encountered all that often in the industry because the logs are usually of a more significant diameter, which minimizes the problem. In the case of beech and larch, which normally originate from small logs, there is a strong interest in employing smart sawing with the heartwood centered, and live sawing in order to maximize radial sawing with a view to having stable components, for example for paneling and floors.

Black spruce is the worst species for domestic products (8 per cent MC) and panelling (10 per cent MC ± 2) because of its strong radial and tangential shrinkage, the presence of juvenile wood, and small-diameter logs which aggravate the difficulty.  Fir is easy to dry for use as interior wall boards or for wide panelling – if it undergoes live sawing to maximize low radial shrinkage components.

Based on the above chart, it is easy to understand why the Finns, for example, maximize the use of sawn planks that have undergone live sawing with the heartwood centered in order to stabilize wider components made of larch and beech.

In summary, the larch is still the worst species to dry because of its high T/R ratio, small-diameter logs, and, above all, the great difference between spring wood and summer wood in terms of growth ring density. Beech is the second-worst species because of its substantial tangential shrinkage, small-diameter logs, and possible surface checks related to ray cells of considerable diameter, which nonetheless constitute the beautiful appearance of this species for use in domestic products.

Smart sawing geared to the products
Using lumber industry saws for producing value-added products, which are issued in accordance with the National Lumber Grades Authority (NLGA) Standards, is sometimes hazardous. This practice also increases the volume of discards because cutting techniques are based on productivity and yield, not on sawing patterns tailored, for dimensional stability, to the production of a product with a specific appearance.

For example, there are pieces of wood with the pith on the edge, something which is catastrophic in drying, or where the pith is on the surface, which causes cupping in patio or broad panelling components. In smart sawing for dimensional stability, either the pith is centred in the middle of the wide components or the saw blade is placed exactly on the pith to ensure discard-free thickness planing; live sawing (parallel slicing) can also be carried out to maximize wider radial pieces (as the Finns do with larch or with wider panelling made from all species).

The physical quality of the component takes precedence over the material yield/productivity. The pith should not be included at all on wall planks measuring 3/8 in. in thickness; otherwise, there will be splits in shaping for many pieces, even at the installation stage.

Heat treatment and pitch setting
Certain species, such as larch, contain volatile aromatic compounds which oxidize over time and cause blotches to appear on the wood six months after it has been installed. A drying heating period of 190°F for 12 hours stabilizes the wood’s natural colour by evaporating the volatile compounds. Pre-drying the wood by air prior to the drying renders this treatment impossible. It is also impossible to employ these treatments using dessication dryers unless a hybrid system is available.

In some cases, partial resin crystallization suffices. To achieve this, the wood undergoes heat treatment of 190-200°F over 12 hours for 4x4s and over 24 hours for 8x4s before reaching the fibre saturation point (30 per cent MC) in order to avoid over-drying the more permeable parts. The latter is both unnecessary and risky in terms of possibly crystallising large pockets of resin that are more easily eliminated during shaping.

Smart box pile system
I have adapted this technique for drying beech, which originated in Denmark, for drying larch, and it may be useful for all species or planks with a significant radial and tangential shrinkage differential. This applies especially to planks cut from small logs, which have a radial surface on one side and a tangential sawing surface on the opposite side. That comprises a situation which triggers the potential for cupping, important in the case of panelling or floor components having a width of four inches or greater. The greater one’s desire to offer a wide component to the client is, the greater the problem becomes (see illustration on page 42).

The technique consists of alternating the direction of the heartwood surface from one row to the next during the lathing process in order to counteract the shrinkage forces causing the cup in drying. This is particularly effective during a drying phase of 180°F or greater in order to achieve the wood’s plasticity behaviour. The boards and crosspieces must be perfectly aligned, with double boards placed at the end of the packages. Place the wide and long pieces around the package, with not more than two consecutive lengths per package. Place lathing at every two feet or less, with stickering being over two inches wide and having no variation in thickness (stickering preferably to be made from dry material).

This article is a sequel to one published on larch in a previous issue of Canadian Forest Industries (see For the love of larch March/April 2014).

Pierre Asselin, P.Ing. is the Industry Services Coordinator for SEREX in the Quebec office. 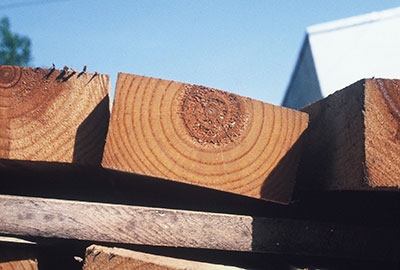 Picture illustrating the shrinkage ratio A log’s value can evaporate in the kiln but there are some tricks to prevent checks and shrinkage.
Print this page