March 29, 2017 - The mountain pine beetle infestation has left billions of dead trees in Western Canada and is now encroaching on other regions. Dead trees dry out and develop splits that severely downgrade lumber. USNR has developed a cost-effective optimization solution that significantly improves the log breakdown process. It results in fewer split and reject boards, reduces the downstream drying and handling for material that will never become viable products, and improves the value of a mill’s output.

Split detection for logs is an optimization solution USNR developed that improves log rotation and log breakdown processes. “Without split detection, we found that as much as 20 per cent of the lumber produced is often later rejected,” said Doug Strasky, manager for USNR primary breakdown optimization systems.

USNR’s split detection system uses visual and geometric scanning to identify splits on the surface of the logs. The USNR optimizer then calculates the optimal solution considering the splits based on grade and value.

The results of the case study are impressive, as shown in the two solution screens above. With split rules disabled (left image) the optimizer found a solution with a total value of $27.47, but the two bottom boards (shown in green) in the cant stack have significant splits in them and will be given a value close to $0 when graded. When we subtract those two cant boards from the solution, the real value of what was produced is $21.34.

For the image on the right (split rules enabled) the optimizer found a solution with a total value of $25.10, and no boards will be down-graded for split/shake. The log will be rotated to ensure this greatest value is achieved in the breakdown process.

Learn more about how to you can benefit from this technology by visiting www.usnr.com. 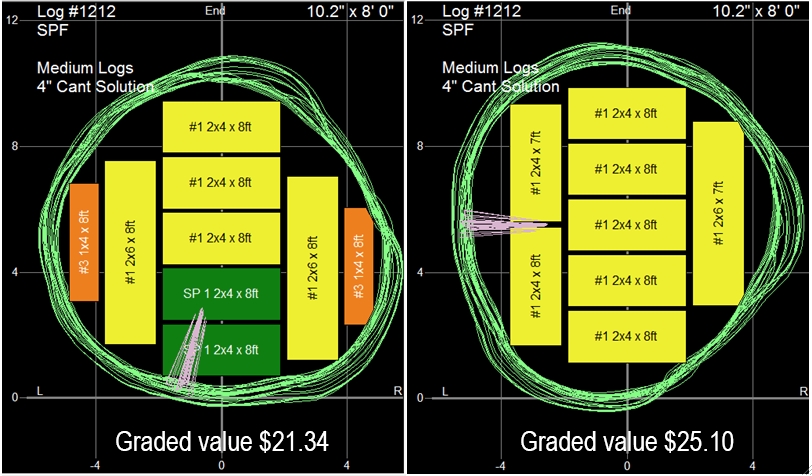