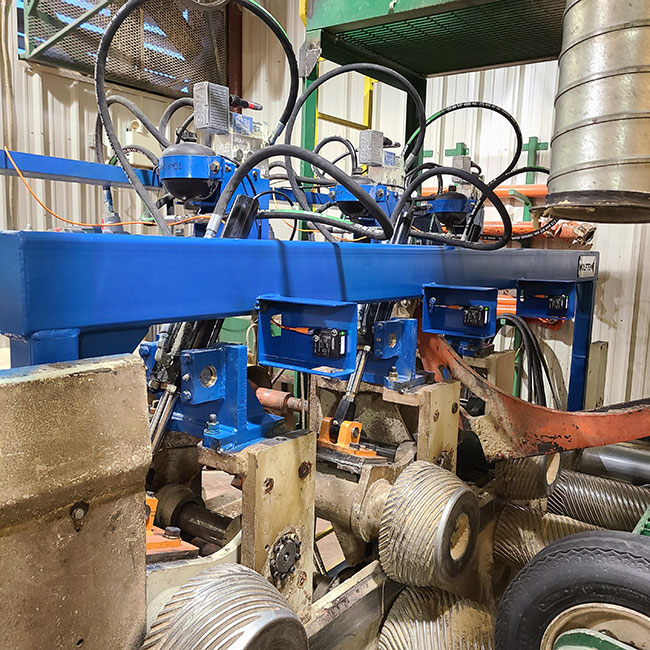 Nechako Lumber decided it was time to invest in a new tensioning system for its high-speed stud planer. Photos courtesy of Wolftek.

In Vanderhoof, B.C., Nechako Lumber Co. was looking for an opportunity to better control the lumber going through its planer mill. The company decided it was time to invest in a new tensioning system for its high-speed stud planer, which produces spruce, pine and balsam in 1×3, 1×4, 2×3, 2×4, and 2×6 sizes.

The company reviewed its options and decided to call upon Wolftek Industries in Prince George, B.C., for its new tensioning system.

“We have lots of these systems on all types of planers,” says Jamie Hull, sales manager and director for Wolftek. “Nechako seemed to be somewhat unhappy with the production they were getting. They realized that our system is a much more positive system that keeps constant pressure, when needed, on the board, to apply to the machine. They could ultimately get much more efficient by decreasing the amount of gap that they were feeding in the current system, and also substantially less jam-ups.”

“The need was to control the lumber going through the planer by applying the pressure from the rolls to the lumber as it goes through to reduce jam-ups and increase uptime,” adds Steve Goncalves, operations superintendent at Nechako Lumber, a Sinclar Group Forest Products company.

Wolftek’s tensioning system is designed to be relatively universal to work with most planers. This has been particularly advantageous during the COVID-19 pandemic.

“We try and keep them very standard,” Hull says. “With supply chain issues that everyone is experiencing right now, we try and keep the parts standard so we can order stock as much as we can. It is a real struggle right now, for sure. But we’re trying not to go to a bunch of different vendors because we know that the items we use now work, and work very well. We haven’t changed from the original design much at all. Ultimately, frames, the logistics around the planer will change, depending on the planer brand itself. But for the most part, the access itself that we’re moving is a roll that’s pretty consistent from one to the next.”

Hull says the biggest benefit is ultimately kind of twofold.

“One, having the roll is a right position to do its job. And by position, I mean both before the board is there, and again, after if there’s a gap, we actually get the roll out of the way so there’s no impact. And second to that, making sure that we apply the right amount of pressure to the piece through the machine.”

Hull says the most unique part of this project is the speed that they run and the amount of pieces that they run.

“We don’t see many mills that run over 400 pieces per minute, or at least wants to achieve that consistently. And I believe that’s probably the biggest problem that they were having originally was the amount of pieces that they’re trying to get through,” Hull says. “I think they’re seeing that a lot more consistently now.”

Hull says Wolftek worked really hard on its photoeye positioning to help the mill achieve its desired efficiencies at that speed.

“Ultimately we’re trying to make sure that at that speed the photoeyes are picking up the board in the proper position to present it to the roll itself,” Hull says. “Picking up the smaller gaps at those types of speeds is pretty tough, so we try and position those photoeyes to achieve that, where it picks up the gap no matter how big or small it is.”

Goncalves says the planer mill encountered no challenges during the installation and commissioning of the system, which was installed this past January.

“There was a little bit of challenge on just training, getting used to the system and how it works,” he adds.

“We’ve seen some gains in uptime,” Goncalves says. “Some boards are going through the planer that previously were unable to make it through, they would jam up.”

The cause of the jams varied from defects in the lumber – like splits, shakes, and rot – to the lumber being too dry, or improper feeds, speeds or tensioning.

Addressing these issues at the planer has resulted in measurable improvements in production efficiency.

In addition to reducing jams, the new tensioning system also improves preventative maintenance to other parts of the line.

“The Wolftek system is a little more gentle,” says Nechako Lumber maintenance supervisor Zeph Raymond. “The original system was pneumatic, and it was a bump-open system. So, you set your air pressure settings for what you want it for your clamp force, but it had no way of knowing where the product was. The product would push itself under the roll and then the tension would be the air pressure. Whereas the Wolftek isn’t a bump-open system, it drops the rolls down on top of the product and then releases them before the product leaves the roll.”

“We put two thermal imaging cameras on the planer – one for side-view of the planer watching for hot spots or a misaligned machine and another up overhead to see if there’s something wrong with the machine or a pending hot spot,” Hull says.

“This basically tells us how our planer is set up based on temperature, it’ll show us hotspots or whether or not we have the planer setup right, and it could also tell us we have a bearing that needs to be changed out or is going,” Goncalves adds. “If it catches a bearing before it goes, we can schedule maintenance to phase it out.”

Nechako Lumber has been busy upgrading other parts of the sawmill and planer mill on site. It is currently in the process of upgrading its Comact optimizers.

The company has also added SiCam automatic sizing controls throughout the sawmill and the planer.

“Basically, what they do is they measure the lumber coming through each machine center to make sure that it’s on size, and certain machine centers can be adjusted automatically through SiCam, and then other machine centers will just give us a notification saying that we need to take a look at our sizes because they’re off.” 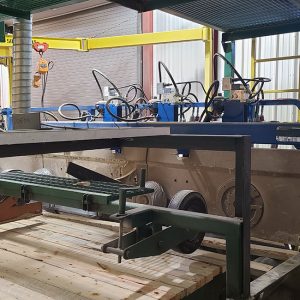 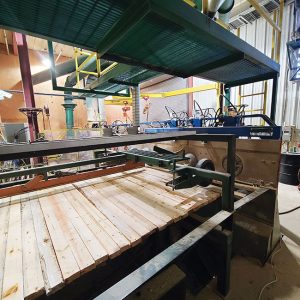 Keeping equipment parts standard and universal has been advantageous during the COVID-19 pandemic. 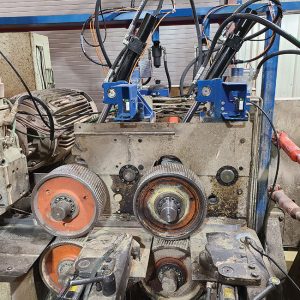 The loads of lumber get put onto the tilt hoist from the forklifts and they travel up the hoist and then get dumped onto a chain run, tier by tier, which then goes to the Gilbert planer.

Once it’s planed, the lumber travels on to slowdown belts to slow the lumber down, so it can land on a deck that will go through the Comact optimizers into sort bins, which are graded by grade and length. From there it will dump on to deck chains, which move the lumber to Comact trimmers, which will cut it to the required lengths, and then the lumber is moved to the stackers.

From there, the lumber travels over to the Signode strapper, which will place a plastic strap around it, and then from there it goes to the wrapping station where staff will wrap the loads with the company’s lumbar wrap. The forklift operator then picks up the final product and either places it in the yard or on to trucks or a train.

As with almost every other company in Canada’s forestry sector, finding workers has been a challenge for Nechako Lumber, which typically employs around 200 people at its Vanderhoof site, between its two shifts at the sawmill and planer mill, the company’s energy plant and its pellet plant. The emergence of the COVID-19 pandemic made matters worse.

“It’s definitely been a challenge, especially when COVID hit. We had to change a whole bunch of protocols and procedures, have meetings on how we interact with a limited amount of people in the room, and then with the isolation for people, missing employees for two weeks at a time, numerous employees, it’s been a struggle,” Goncalves says. “There’s been times where we weren’t getting many resumes or applications, it seems to be picking up now though.”

To help counter supply delays, which have been upwards of six months, the mill tried its best to purchase additional spare parts in advance, whenever possible.

As for any future plans to upgrade its planer mill, Nechako Lumber is going to continue to look for ways to optimize its mill operations.

“We’re always looking at ways to automate. Nothing has been finalized, it’s all just in the conception phase right now,” Goncalves says.