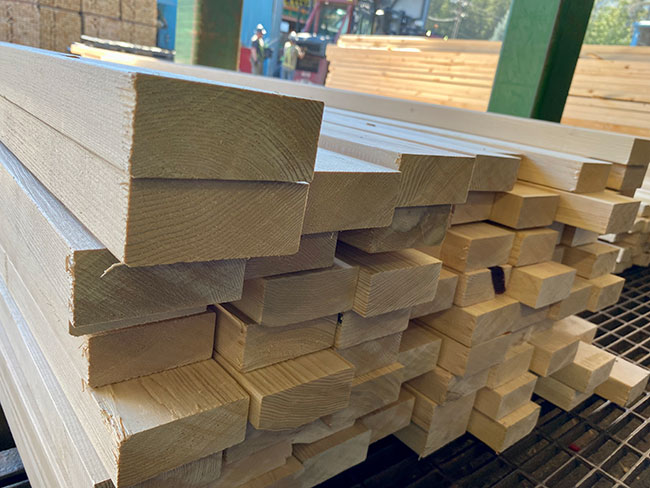 After a decades-long saga, Waswanipi, Que., has a sawmill again. The Cree Nation of Waswanipi, Mishtuk Corporation and Chantiers Chibougamau announced the opening of the Cree Lumber sawmill November 24.

Waswanipi previously had a sawmill that had run and shut down three times, the last time in 2006. Cree Lumber will be owned with a 51 per cent share by the community of Waswanipi, and 49 per cent owned by Chantiers Chibougamau.

“It is a great pleasure to see the next step of development for the Cree Nation of Waswanipi,” Cree Grand Chief Mandy Gull-Masty said in a statement. “The presence of partners is the key highlight to the realization of a project to enhance the rightful place of Indigenous peoples in one of the key industries of our region.”

The mill comes along at a time when lumber is desperately needed across Cree communities, after global shortages during the pandemic. Cree communities have identified 5,250 single-family dwellings that are needed in the next 15 years to meet housing needs.

Waswanipi holds a wood allocation and a historical mill permit to harvest timber through its forestry company, Mishtuk Corporation. Former chief of Waswanipi Paul Gull takes over as the company’s CEO and board chair.

“It’s all about sustainability: we take only what we need to sustain ourselves,” Waswanipi Chief Irene Neeposh said in a statement. “Having the mill reopen allows people to be part of the solution in addressing the housing crisis and encourage them to build their own home so we’re not so heavily dependent on social housing.”

Gull said the announcement was the culmination of 30 years of work, when the late Peter Gull began pushing for the community to run its own sawmill. However, the sawmill at the time had issues with past partners and was not able to compete in the market, forcing it to shut down at different times and lay off workers.

This new mill would allow the community and the company to enter into other joint ventures, Gull said. Right now, the company’s plan is to be able to sell 20 per cent of the lumber directly to Cree communities to be used for housing, with the rest going to lumber markets.

Eventually, the company hopes to create value-added products, including trusses, windows and doors. In the long term, Gull foresees selling biomass, for example, to heat greenhouses.

The mill is not yet open, as the company is still hiring, but Gull said he expects it to be running in the new year. It could create up to 60 jobs, he said, working two shifts. If the company can secure enough lumber, they could eventually move to 90 jobs in a 24-hour operation.

While mill work was traditionally seen as hard physical labour, Gull said that much of the process was now automated and computerized, meaning that people of all ages and genders could apply. He noted that Chantiers Chibougamau had a 30% female workforce. He added that he expects other jobs to be created as a result, including in transportation.

One of the challenges for the company will be securing high-quality timber. Gull said that the government had auctioned off wood that was five kilometres away from the community, which was “totally unacceptable to us.”

“We’ve confronted the government on that issue. They are trying to find a way to resolve that situation, but in reality they’re taking our best wood within a 60-kilometre radius of our mill,” he added. This wood is among the best in the world, and Gull said he’d like to get the 50 or 60 kilometres around the mill protected.

Gull added that he wanted to thank all the employees who have hung around since the beginning for continuing their support for the mill. “Thank you very much, have a Merry Christmas and a Happy New Year!”

Benjamin Powless is a Local Journalism Initiative reporter for The Nation.