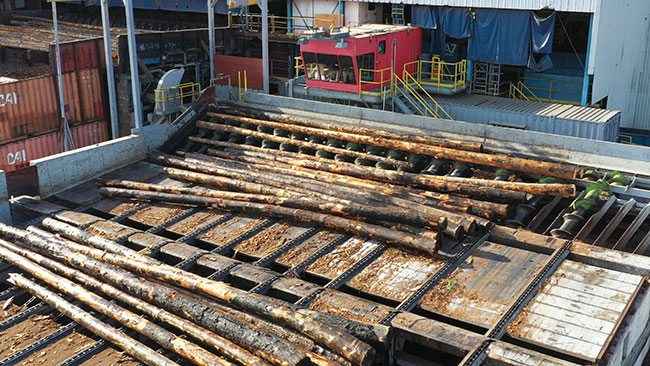 The Springer Microtec Screw Unscrambler singulates and ends stems from a pile of logs. It then accelerates and feeds the logs onto the receiving conveyor. Photo credit: Springer-Microtec

Coastland Wood Industries, located in Nanaimo on the east coast of B.C.’s Vancouver Island, is a veneer and roundwood facility known for making major investments in equipment upgrades.

CFI checked in with Coastland in 2018 during its complete retrofit of one of its two log deck lines, replacing it with the first complete Springer-Microtec system in North America. Featuring mechanical, scanning and controls solutions by Springer-Microtec, the line includes multiple scanning systems (including two Microtec Logeye scanners) that better predict the best use case for each log.

Now CFI  has returned to Nanaimo to look back at the installation process and see how the multi-million-dollar capital project is performing.

Breaking ground in late 2017, equipment began arriving in January of 2018, says Coastland’s manager, Shawn Eby. The initial installation was finished in June of that year. That work went on while the mill continued to run at about 80 per cent capacity, using its other existing log deck line.

“The cost to do such a project…it would be prohibitive [otherwise],” he explains.

The retrofit replaced a five-saw log line installed in 1988. The new Springer-Microtec line scans the whole log, debarks it and then cuts the log using the bucking solution from the first scanner, explains Eby.

“It’s a huge improvement from what we’ve previously done in that regard,” he says. “The blocks then get scanned for grading before being sent up to our veneer mill.

“It also allows us to recover logs that we wouldn’t have in the past,” says Blakey. “Prior to this scanner, we just chipped anything under a certain diameter. Now we are able to identify that, ‘Yes, that’s a small diameter, but it’s perfectly cylindrical, so it’s worth peeling.’”

These scanning capabilities, and the consistent results they can produce by making the best use of the fibre coming in, was a big part of the decision to go with this system, says Eby.

Overcoming challenges
But, choosing to go with a vendor based in Europe did present a few challenges.

As far as the initial installation goes, Eby says he was happy with Springer-Microtec’s project management. Much of the challenge came from demoing existing infrastructure and piecing together the new line in the mill while keeping production going.

However, differences in labour legislation in Canada and Europe, as well as different cultures around work expectations and working in different time zones, did lead to some issues in the commissioning process, says Eby.

“It was a challenge at times to communicate and have that steady support during that commissioning process for us – particularly because it’s new equipment,” he says.

“We achieved it, but there was a fair amount of frustration from our part in understanding the amount of time that workers from outside of North America are able to stay here and work, and following all of their labour laws as well.”

Nevertheless, Eby and Blakey recognize Springer’s commitment to delivering a robust, functional product that works for their buyer. One example of that commitment came about when an issue was identified in the hand-off of the cut blocks from the saws to the conveyor belt, says Blakey.

“Springer recognized it was a design flaw and they came up with an excellent solution and we installed it about six months later [around Christmas of 2018],” he says. “They were good from that regard in making sure we were happy with the end product.”

With the log deck line in operation, another initial issue was the sourcing of replacement parts, says Eby.

“I know we live in a country that recognizes metric. Springer and all of Europe recognize the metric system, and a lot of the parts and motors and reducers are all formulated based on a metric system. Accessing those specific parts is actually a little bit of a challenge for us in Canada,” he says.

For example, Coastland has been working with SEW Eurodrive to provide replacement gear motors for the new line. With a location in Vancouver, the company has been a great support to Coastland, but nonetheless provides parts that are somewhat different to what Springer-Microtec’s equipment requires.

“So, there is a little bit of modification on our end to make that stuff work, in order to receive it in a timely manner,” says Blakey. “Otherwise we’d be looking at six to eight weeks delivery for some of these items out of Europe.” 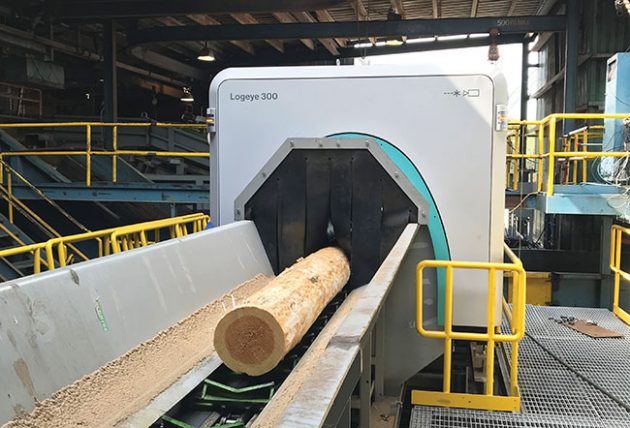 The Microtec Logeye 300 with Veneer Prediction scans the true shape of each block, calculates the amount and quality of veneer that will be produced, and sorts the block by this value. Photo credit: Springer-Microtec

Reaping the rewards
Despite these issues, Eby and Blakey acknowledge that no project like this goes perfectly smooth, even if your vendor is located next door. Overall, they see this retrofit as an example of how mills don’t have to feel restricted to purchasing systems made in North America.

Eby says Coastland is happy with their ongoing relationship with Springer-Microtec, and that they continue to work together to identify and overcome challenges with the new system.

Now, Coastland is already experiencing benefits from the new log deck line, even though they have yet to tap into much of its potential.

The new line runs at an average speed of 400 feet per minute, leaving the mill’s secondary log line running at a reduced workload. Coastland has also increased its veneer output by five per cent, maintaining its 470 million square feet annual production of veneer on a 3/8-inch basis, but consuming five per cent less Douglas Fir.

“The recovery of the log to blocks is definitely an improvement,” says Eby. “That’s due to a combination of things.”

A big part is Coastland’s decision to bring in a Wagner L120 to unload all of its logging trucks, rather than using Caterpillar 980s. This would take three grapples to unload a truck, resulting in breakage and reduced yield, Eby explains.

With regards to the new line itself, Eby believes the whole-length log debarking has also added to efficiency gains. However, it’s the bucking solution that is the real key, because the operator is not making that decision. This results in more consistency.

A steep learning curve
Ultimately, the new line is providing Coastland with robust output, redundancy and a high ceiling to tap into as they continue to retrofit and upgrade other equipment.

In fact, additional upgrades have already begun. Coastland is currently working to update another lathe, which, once finished, should be able to put more demand on the system as a whole.

“It would be nice to truly maximize both of those [log deck] lines’ output,” says Eby.

While upgrading equipment will help the mill get there, it’s critical that operators become comfortable with the new equipment. That represents a big challenge for operators moving from a legacy system. But, it’s one Coastland is committed to helping their employees take on.

“There is a steep learning curve to change people’s habits,” Eby says, noting that operators are having to move from a hands-on approach to viewing and reacting to the input of 12 to 15 cameras.

Nonetheless, he says these big investments in new equipment cannot obscure the fact that Coastland’s employees are the company’s biggest asset. True to form, their operators have overcome these sorts of challenges before, Blakey says.

“We experienced that in 2013 as well when we installed a new lathe line, completely different than our other two. The start-up frustrated a lot of our operators. Now, that line runs exceptionally,” he shares.

Paving the way
Overall, Eby says Coastland is happy with their current position after retrofitting the mill with Springer-Microtec, and feel that this project shows how a cross-Atlantic relationship can work for North American mills.

Being part of a company that’s willing to take on these projects and pave the way for others is a source of pride, says Blakey, noting that several other mills have taken a tour of their operations since the new installation.

Ultimately, projects like this are about commitment to the veneer business and its future, Eby says.

“Coastland’s ownership continues to re-invest to improve profitability, which sustains the livelihoods of our people. Without that commitment, the business, in only a few years’ time, may no longer exist.”

Instead, with this new line and more upgrades on the way, Coastland can look forward to greater efficiencies, higher production and a lasting future.