The largest forestry trade fair in the world was just too big for us to cover in one issue of CFI. In the June/July edition, we brought you lots of new gear that was showcased at Elmia Wood 2009 near Jönköping, Sweden, and in this issue, we are continuing our coverage with more exciting developments from global manufacturers that were at Elmia. 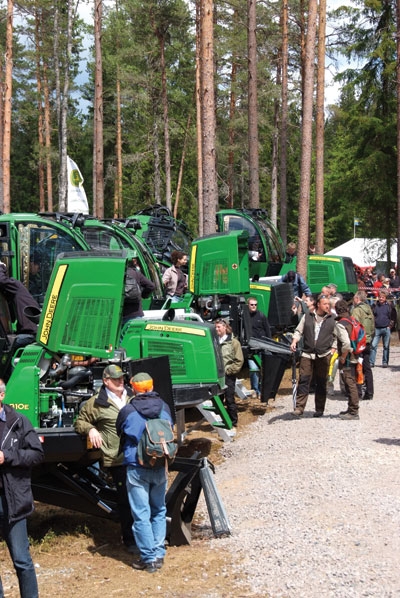 The largest forestry trade fair in the world was just too big for us to cover in one issue of CFI. In the June/July edition

By the time the four-day show closed in early June, over 46,000 individual visitors had taken in almost 500 exhibitor stands on the 150-hectare managed forest site, which included a 68,000-square-metre stand area and a 200,000-square-metre live demonstration area. An efficient shuttle bus system moved attendees between the “small scale trail” that was mainly smaller booths, and the “large scale trail” that was home to the live demonstrations.

Elmia Wood, which is held every four years, is where many manufacturers first introduce new products to the marketplace. Below, you will find some of the new and interesting equipment that was on display. For Part 1 of our Elmia coverage refer to our June/July 2009 print edition, or go to our website, www.canadianforestindustries.ca, and click on “view magazine.” Once the current issue comes up, click on “archives” in the top left corner and then click on the June/July 2009 issue. You will also find some video footage on the home page of the website that shows some of the action and demos from the show.

Bracke Forest
Sweden’s own Bracke Forest had a number of newer items on display at the show, including the C16.a silviculture and biomass head, the new T45.a four-row disc trencher and the P11.a planter. 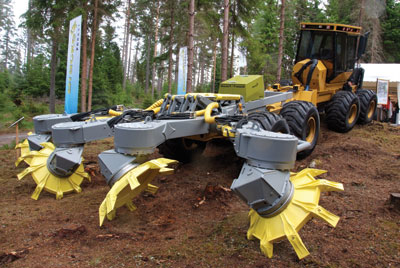 Bracke says the C16.a can be attached to harvesters, forwarders, and other machines equipped with a boom or crane and is ideal for all types of mechanized clearing. The head features accumulating grapple arms that make it possible to easily gather and stack stems from one to 26 centimetres in diameter.

The T45.a four-row disc trencher has the potential to increase production by up to 80%, which can provide substantial savings in labour and fuel costs per hectare. The articulated design of the T45.a allows it to handle uneven terrain with ease, while the Bracke growth control system provides the operator with crucial productivity information.

The company’s automated P11.a planter received a great deal of attention from visitors to the Bracke stand. The automated planting machine is easy to use and controlled from the cab. Like the four-row disc trencher, the planter also takes advantage of the Bracke growth control system.
www.brackeforest.com

Bruks Mobile Chippers
Bruks AB of Sweden came to the show with a full lineup including its largest machine, the new 1300 RT, which is  a heavy-duty mobile chipper for extremely demanding applications. It is ideal for energy wood, roundwood, parts of trees and logging slash. Powered by a six-cylinder, 700-horsepower diesel engine, the 1300 RT can be rotated, making it suitable for chipping operations in narrow spaces. Chips can be discharged into hauling vehicles. 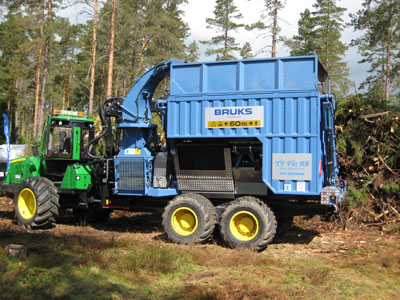 The company displayed several other machines, including its popular 805.2 mobile model, which is also available in a truck-integrated version. Recently updated, the 805.2 features a long-reach crane, an ergonomic crane cabin, a sideways dumping chip bin and complete control and hydraulic systems. It can handle logging slash, parts of trees and roundwood up to 50 centimetres in diameter.
www.bruks.com

Husqvarna
This year is the 50th anniversary of Husqvarna’s chainsaws and at Elmia Wood the company had its 450e “Jubilee” model on display. The 450e model is one of Husqvarna’s most versatile chainsaws, so it was fitting that this was the model chosen to celebrate the company’s success. The special anniversary version is decorated with 50th anniversary logos and comes in a special package with a unique chainsaw bag and a hat. 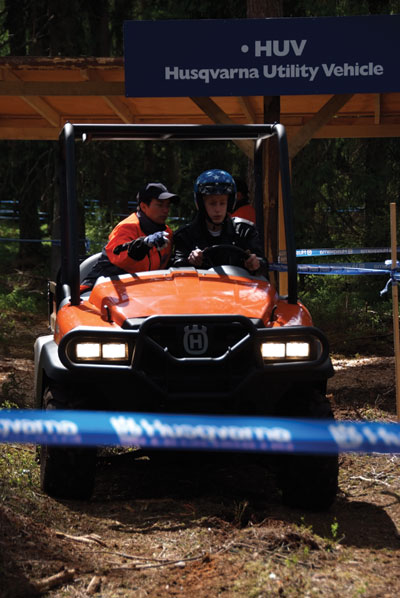 The company also demonstrated its new 535FBx backpack chainsaw for spacing work, which features improved ergonomics designed to relieve stress on the shoulders.  Another popular item at the Husqvarna stand was the company’s HUV 5420 DX. This utility vehicle, which is already popular in North America, switches automatically between two- and four-wheel drive, enabling the effortless navigation of steep roads and wet, muddy areas.  www.husqvarna.com

John Deere
John Deere came out to Elmia Wood 2009 in full force as they displayed the entire line of the E-Series harvesters and forwarders as well as the 540H and 548H skidders and an Energy Wood harvester. The E-Series is scheduled to hit the North American markets next year.  In addition to offering improved operator comfort, controllability and reliability, all of the E-series machines are designed to improve productivity and uptime while lowering daily operating costs. 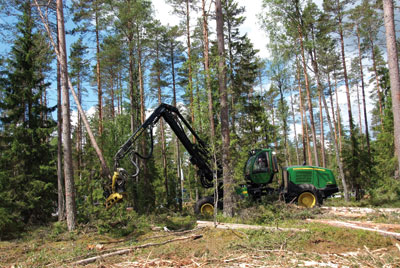 The company also introduced its hybrid electric drive train concept at Elmia. Designed for use in some of John Deere’s future equipment, the company says, “this is the latest step in its quest to meet customer needs through products and services that conserve natural resources, adhere to regulatory developments and promote eco-friendly use of land, including the use of clean energy sources.”

The hybrid electric drive train concept is based on a smaller than normal diesel engine that drives a generator, then a motor followed by a two-speed gearbox. A traditional manual transmission is eliminated. The company says depending on the applications, the technology can enhance fuel efficiency from 15% to 25%.

John Deere also showcased its Tier 4/Stage III B engine line at Elmia. John Deere Power Systems (JDPS) announced in April of this year that it could meet the new stringent mobile off-highway emissions regulations for the company’s complete lineup of industrial diesel engines. These regulations require at least a 90% reduction in particulate matter and up to a 50% reduction in nitrogen oxides from previous Tier 3/Stage III A requirements. JDPS will continue to offer the familiar John Deere PowerTech displacements of 2.4L, 4.5L, 6.8L, 9.0L and 13.5L. Power ratings will also be similar to the Tier 3/Stage III A engines.
www.deere.com

Keto/Quadco
Keto had several heads on display at Elmia, including the Keto 150 Eco Supreme. This model weighs in at 900 kilograms and features a 25-inch saw bar. It can fell tress up to 64 centimetres in diameter and offers “loading grapple arms” that are unique to Keto, a simple and strong design, and low maintenance costs. It is also easy to service and operate. 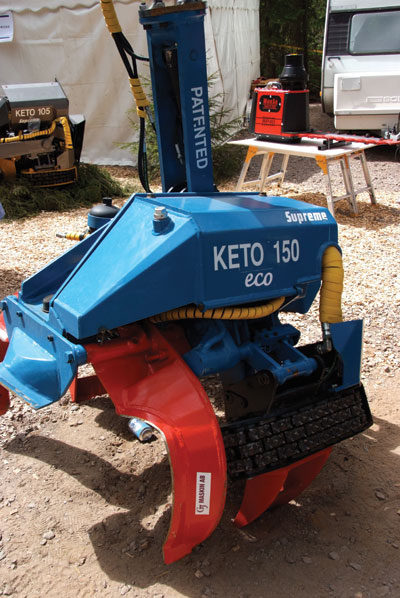 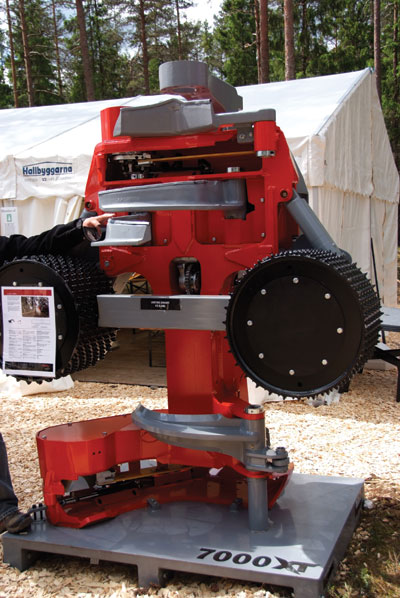 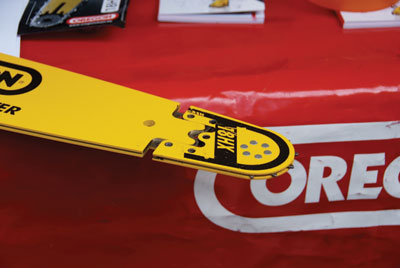 Oregon had a number of other products on display at Elmia, including its new Arborol biodegradable bar and chain lubricant. Arborol is made from specially processed renewable vegetable oils and emulsifiers. The company says a 1:4 mix of Arborol and plain water provides outstanding lubricating and cooling performance when compared to standard mineral chain oils. It is designed to offer extended component life, a cleaner drive sprocket housing, reduced down time, and improved environmental performance.
www.oregonchain.ca 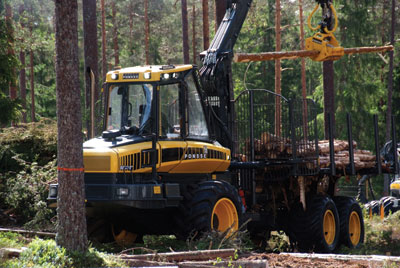 The Ponsse Fox thinning harvester made its debut to the general public at Elmia Wood. The company showcased the all-new C22, which features an 11-metre reach, easy maneuverability and two slewing motors.  The eight-wheel Fox offers low surface pressure and stability on sloping terrain, making it ideal for multiple sites.
www.ponsse.com 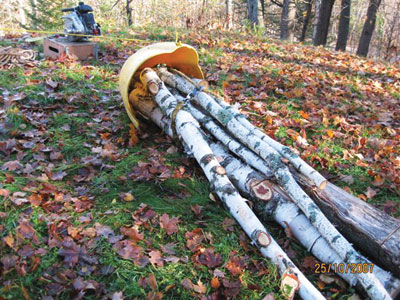 Portable Winch from Sherbrooke, Que., took its products to Elmia 2009. The company offers a portable capstan winch that is powered by a four-cycle Honda GXH-50cc engine. The Canadian designed and built winch is ideal for anyone working in the woods that needs to pull loads, including logs, when located away from conventional power sources. The winch can provide up to 2000 kilograms of pulling power. A complete line of accessories is also available for the Portable Winch, which is already available in a number of European countries, Japan, and the U.S. and Canada.
www.portablewinch.com

Rottne Industri AB
World premieres were the name of the game at Elmia for Sweden-based Rottne Industri. The company introduced a number of new models, including the H-10 thinning harvester, the F13S forwarder with a steerable wagon, and the F15 forwarder. 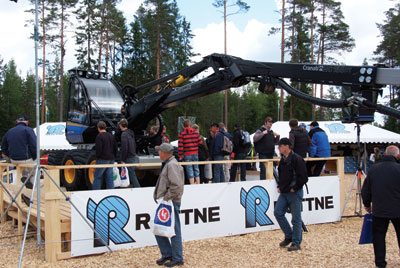 The H-10 is strip road thinning harvester that sits between the H-8 and the H-14 in the Rottne line. Like Rottne’s larger harvesters, the loader is mounted over the front bogie, the cab is situated over the mid joint and engine, and the transmission and oil tanks are in the rear.

The F13S forwarder replaces the F12S model and is largely a new machine. Rottne says it has the same payload as its predecessor but offers higher performance. This eight-wheel forwarder with a 12-tonne load capacity features a new cab, a stronger steerable wagon and a loader with higher lifting torque. The F15 replaces the F14 model and also offers a newly developed cab and a loader with higher lifting torque.
www.rottne.com

Tigercat
The Tigercat stand attracted logs of attention at Elmia Wood, especially the 1075B 20-tonne forwarder the company had on display. The 1075B features wide spread bogie axles, a massive centre joint, a new cab, and the latest user-friendly MD3 control display. 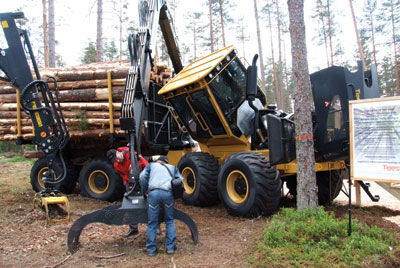 In addition to the 1075B, Tigercat also demonstrated its 1055B 14-tonne forwarder and featured its skidder and forwarder based scarifiers, including its 635D with the revolutionary turnaround seat. They also had the compact eight-wheel drive H09 harvester on display, which has proven to be popular in Sweden and they teamed up with Bracke Forest, displaying a 1075B forwarder equipped with a Bracke four-row scarifier at the Bracke stand.

For steeper slope cut-to-length work, Tigercat showed off the LH845C track-based levelling harvester, which the company says is popular in some markets in Europe, including Germany, Russia, Norway and the U.K., where the negotiation of steep slopes is an everyday event.
www.tigercat.com