Just under two months before the doors open for the Resources Expo in Prince George, B.C., all indications are that the three-day event will be a major success.
The show, which will run from June 3 to 5, is the first event to place all of the province’s central and northern major resource industries under one roof. The show will also include a face-to-face job opportunity and training component. 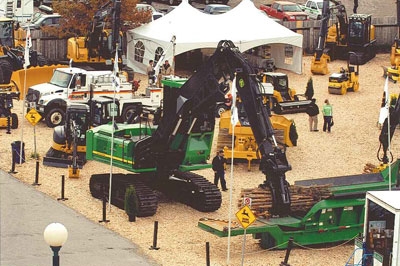 The recipe seems to have struck home, prompting acceptance and participation from across the resource sectors. The main trade floor at Prince George’s CN Centre was booked solid by late February and a waiting list has been established. Much of the remaining indoor booth space had also been spoken for by press time and the outside paved area was 50% booked by late February, although space remained for exhibitors wanting to display and demonstrate large pieces of equipment.

“The response from participants has been very positive,” reports Carmel Kelly, administrator for Resources Expo. “Many are happy to see the event continuing and changing to include the other land based resource industries,” she notes, referring to the show’s roots as a forest industry event. “Many are also happy to hear that it will be a business-to-business networking atmosphere with limited general public admittance.”

The show was pioneered through Forest Expo and the concept has been growing and developing since 1985. Despite the unprecedented challenges the forest industry is slowly recovering from, it has been a key supporter of the new Resources Expo. The event will also highlight the emerging biofuel and bioenergy industries, demonstrating how they can fit within traditional large scale commodity lumber production. The innovative bio-duo can significantly improve fibre utilization, add value, and create employment, all while diversifying the industrial base.

The show also has strong support and representation from the mining industry and the oil and gas sector. Both of which have endured their own share of problems recently, but continue to have an optimistic future in northern B.C. The mining industry’s headline regional project is Terrane Metals’ Mt. Milligan property. Construction is scheduled to begin this year on the estimated $900 million open pit copper/gold mine north of Fort St. James, B.C.

Natural gas prices took a nosedive in 2009, but analysts say the long term future is excellent and they predict a spike in oil drilling programs during 2010. Regional mega-projects are still very much alive, including Enbridge Inc.’s Northern Gateway Pipeline between the Alberta oil sands and B.C.’s northwest coast. Another is BC Hydro’s proposed Site ‘C’ project, which would become the third dam on the Peace River.

Finding practical ways for everyone to share in these and smaller projects will be explored during a contractor/human resources fair on June 4 that is part of the Resource Expo event.
“The overall goal of the contractor/human resources fair is to bring together those who have or plan to have jobs to fill with those looking for work,” says Kelly. “These days, that’s often people dislocated by plant shutdowns because of the recession.”

The fair will help provide the information people need, including training that will allow them to take advantage of employment opportunities. The scheduled scene-setter at the fair is Cheryl Cran, an author and motivational business speaker who will address the issue of ‘Balding Head: the X-Y and Zoomer’s generation in the workplace.’

For further information on all aspects of Resources Expo 2010 visit: www.bcresourcesexpo.com.