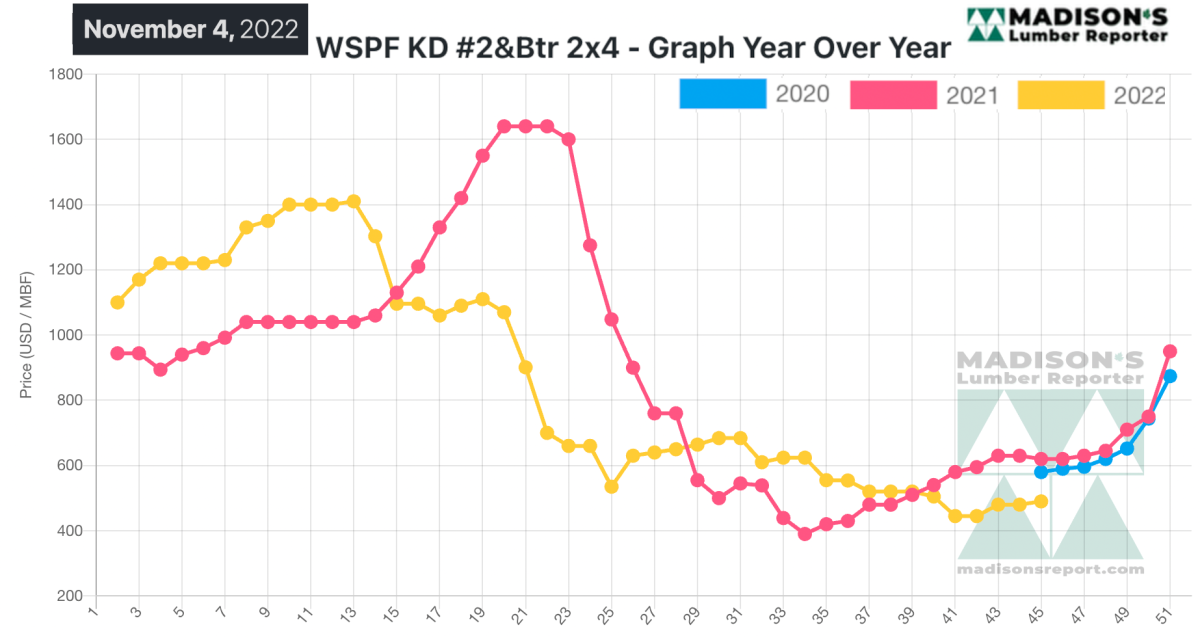 The beginning of November brought a slight firming up for lumber prices, due to recent sawmills curtailments — especially in British Columbia — and ongoing reasonable sales volumes. Customers found inventories in the field quite scarce thus had to come back to producers for their purchases. As the usual seasonal slowdown is upon us, and lumber demand historically starts to wane at this time of year, sawmills start to plan for lowering manufacturing volumes into the winter and year end. As such, suppliers were able to pop prices up a little bit, to satisfy the immediate needs of buyers.

Popping up slightly from the previous week, in the week ending November 4, the price of benchmark softwood lumber item Western Spruce-Pine-Fir 2×4 #2&Btr KD (RL) was US$490 mfbm, said weekly forest products industry price guide newsletter Madison’s Lumber Reporter. This is up by $10 or 2.0 per cent from the previous week when it was $480, and is up by $28, or 6.0 per cent, from one month ago when it was $463.

Demand generated by recent curtailment announcements from major Western S-P-F producers seemed all but gone according to traders. 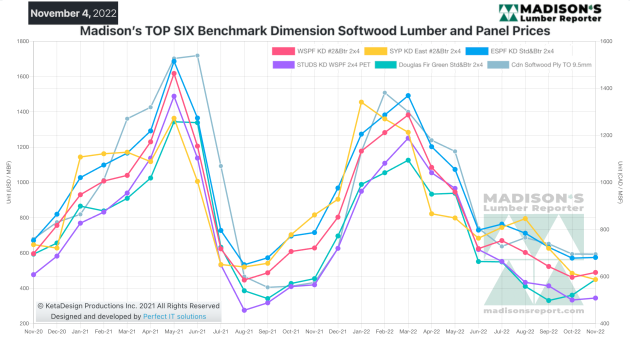 Western S-P-F buyers in the United States were more circumspect in their dealings than during most of October. Rather than jumping back into the market immediately, most sat on the sidelines and assessed their current inventory positions and subsequent needs through the remainder of 2022. Customers who were active in the market confined their buying forays to the distribution network for the most part, as they sought immediate coverage with more reliable shipping timelines. The pullback in demand from noncommittal buyers in multifamily, tract, and mixed commercial construction was noticeable. Mid- to -late-November order files were reported by sawmills.

Canadian suppliers of Western S-P-F lumber were less busy as the general tone in the market turned insular in consonance with the arrival of November. The looming spectre of winter was a big factor, with much of the conversation centered around battening down the hatches in response to the change in weather. Sawmill sales lists were thin and getting thinner, but faltering buyer activity was more in line with availability. Sawmill order files were in the range of two- to three-weeks.

“Eastern Canadian traders described a tentative market, as November began with many buyers turned to the task of processing incoming orders rather than pursuing further coverage. Producers kept their dimension lumber asking prices at or on either side of last week’s levels. Good demand and takeaway over the past two weeks allowed sawmills to build up strong three-week order files in advance of this comparative quietude.” — Madison’s Lumber Reporter