Rising glue costs and competitive market pres­sures require that plywood producers find savings in their production processes wherever possible. Generally speaking, glue spreaders have been the same for many years. Now, however, Raute foam glue technology may be able to help reduce the amount of glue used in modern lay-up lines, and reduce the labour component as well. 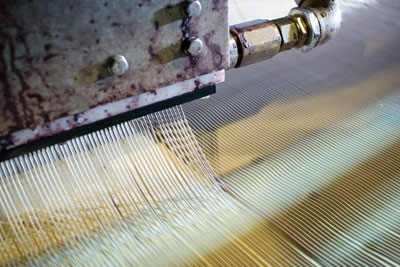 Foam glue spread rates vary between 115 and 130 g/m2, depending on the species and panel quality. There are four methods for applying glue: spreader, curtain coater, spray, or foam applicator.

•    Roll it on: Roller spreaders are mechanically simple, robust machines that provide a viable solution in many cases. Their drawbacks include the inability to integrate into an automated lay-up process, and their high glue consumption.

•    Sprays & curtains: Spray lines and curtain coaters have wide variations in glue spread rates due to glue properties and ambient mill conditions. Curtain coaters are also prone to breaks in the curtain, leading to dry spots and delamination. Both applicators also require continuous filtering, as failure to do so may lead to contaminants clogging the dosing equipment. Both these application methods do, however, enable the implementation of automation in the lay-up process.

Auto Foam
Foam gluing equipment differs from liquid gluing systems. Glue is pumped to the foamer and adjusted by flow meter, which controls the volume and displays the data on the operator’s interface. The foamer mixes glue and air to create foam, which is passed through pipes to the extruder heads. Raute’s foamer minimizes heat generation by operating at a rotation speed as low as 800 rpm. 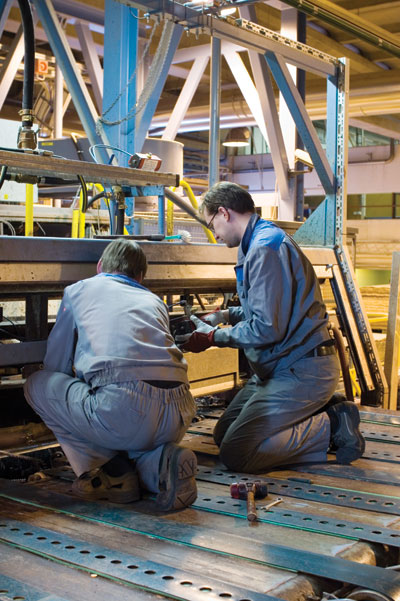 Overall, the system is designed for ease of operation and simple adjustment. It is highly automated and easy to learn. The application equipment has an automatic washing program, which enables the line to operate with a high level of efficiency.

Raute developed foam gluing in cooperation with plywood producers and glue suppliers in response to the need for a cost-effective glue application system. The first line was installed on UPM-Kymmene’s Pellos 3, 3×8 softwood lay-up line in Finland in 2002. The second went to a specialty plywood producer, Vammalan Vaneri, in 2003. A year later, Maderas de Llodio, Spain, bought a low-capacity line for laying up maritime pine plywood. The most recent install was a high-capacity line at UPM-Kymmene’s birch and combi-plywood mill in Saynatsalo, Finland, in 2005.

This last application involves veneer being fed by an automatic feeder, and proper sheet alignment has been instrumental in this line’s ability to achieve high placement accuracy. The line has one operator who monitors the veneer flow and redirects faulty sheets to a bin prior to glue being applied. Pairing face and back sheets helps the line achieve high capacity. Automatic tablets accurately place the veneers, and there is no restriction in the number of plies.

The lay-up proceeds to the squeeze pressing stage, which in this case is a platen press. A roller squeezer may also be used. The laid up stacks are then transferred to the pre-press.

While the technology has been successful, both supplier and UPM note that there are issues to continue working on to maximize the system’s full potential. One of the main challenges has been finding the optimal type of glue. There are also issues to be addressed concerning process knowledge, technology, and glue properties, Raute adds. UPM’s technical director Henrik Sjogren, says the key reasons for supporting this new technology during development is the potential to reduce labour requirements, glue costs, and possibly to use veneer with higher moisture contents to reduce drying costs. He adds that a big factor is the quality of the process before the foam gluer.

“The line is efficient when running optimally. The veneers should be high quality and the stacks should not contain trash that might disrupt automatic feeding. Stack quality must also be high.”

Of course, regular maintenance is required to keep the system working and uptime high, like all equipment. Still, he sums up that they believe in the technology. “We are maintaining our efforts in that direction.”

Jori Sopanen is a writer with PLY-VISIONS, Raute’s customer magazine, where a version of this article first appeared. Used here with permission.