When Tolko Kelowna’s stud mill starts up its Comact DDM6 small-log line in late October, it will be the first stud mill in Western Canada to battle the Mountain Pine Beetle (MPB) using the new technology. Approximately 12 DDM6’s (or larger DDM series units) have been installed in Western Canadian mills for small log handling, but never in a purely eight-foot stud operation. Such stud mill installations have occurred in Eastern Canada, but the difference is in the fibre being handled. The Tolko Kelowna division will be dealing with all the complexities that the MPB brings — brittleness, dryness, radial checking, rot, and blue-stain. 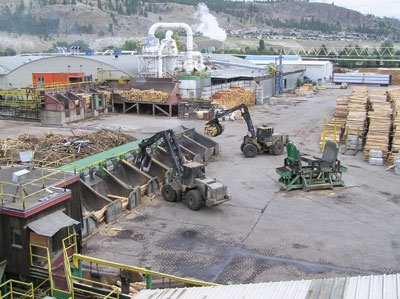 “The project will help us extract maximum value from every log,” says site manager Greg Maralia. Yet the Comact small-log line is expected to create a major lift in production as the beetle’s infestation of the Okanagan area sees more damaged stems and increased volumes turn up at the mill yard. “It will increase productivity by 40% and recovery by 20% on the small log line,” says Maralia.

Tolko has recently invested $13.4 million at the site: $3 million on the Comact DDM6 line and Wave Feeder; and $8 million on the site’s planer mill with the installation of a new Comact Gradexpert, Carbotech GIXI lug loader, two Comact trim-saws, conveyor systems, and a new 30-bin J-bar sorter. The remainder has gone into a new air quality control system that reduces black fly-ash, since the mill has both the good and bad fortune of being located at the edge of downtown Kelowna, a major tourism destination. It is also on the shores of the Okanagan Lake, home to many boaters.

Travis Stelter, P.Eng., capital projects manager, says the DDM6 was installed over a 10-day period. An existing double-length infeed system was removed to accommodate the new unit. The Gradexpert was installed during the early spring running with the original line in the mill, but by early September the lumber flow switched over to the new Comact line, which features a faster flow speed, customized stamping, and more grade sorting capabilities. The old line will be left intact for a short period as back-up, but will eventually be dismantled.

Balanced flow
Currently, the stud mill runs two lines. The old small-log line processed up to a 6.5-in log, but a 5.5-in log was the average. The new installation will allow processing up to an 8-in log, with the average log measuring around six inches. While that extra half-inch may not sound like much, it will provide a more balanced division of fibre between the two primary breakdown lines. The large-log line handles up to a 10-inch log.  Before the installation, the log split was 65% into the large-log side, and 35% to the other side. Another 15% will now trickle over to the new line for a 50-50 flow of logs.

The new one-pass, small-log DDM6 line allows the stud mill to match daily production rates with the new planer line, and move it from three shifts to two with a minimum loss of output. The stud mill’s production target for the new installation is 850,000 bdft per day on two shifts compared to the current 900,000 bdft over three. That leaves an extra shift open, a window of opportunity to handle more beetle-damaged wood if need be and if markets improve.

Maralia says that about 50% of the logs are now Lodgepole Pine, of which close to half (or approximately one in every four logs fed into the mill) has some MPB damage. That infested pine portion is expected to climb over the next five years as salvage logging climbs to as high as 80% of the mill’s fibre intake, meaning nearly one of two logs with some form of beetle damage.

The Okanagan Tree Farm License No. 49 Tolko relies on has 29% Lodgepole Pine, with the remainder being spruce, balsam and fir. The challenge that Interior mills are facing is attempting to balance their species cut to meet customer demands and productivity, but at the same time use salvage wood before stands get too degraded. Because of the warmer winters and the drier summers in the southern Interior, tree stems are found to degrade faster, with peeler grade falling down to sawlog quality in as little as a year. This compares to up to six years seen in colder northern climates.  Tolko, though, does have the advantage of lakeside storage in water, which prevents further drying once stems are harvested.

“As we get more wood on site, there is the potential to add another shift and go to 1.1 or 1.2 million bdft. (The third graveyard shift would yield less production as maintenance is still required),” says Maralia.

The MPB cut is adding to the problems already seen in higher elevation stands: smaller stems with rot, twist, and shake. The Comact small log line is expected to help address all those problems, plus the MPB damage and blue stain, says lumber superintendent Bill Morey. While traditional systems have used log positioning to guide the log through the cutting process or employed curved sawing to maximize recovery, the Comact unit has the ability to provide the most optimum position for recovery, as well as move the profiling and cutting heads to allow greater cutting flexibility. 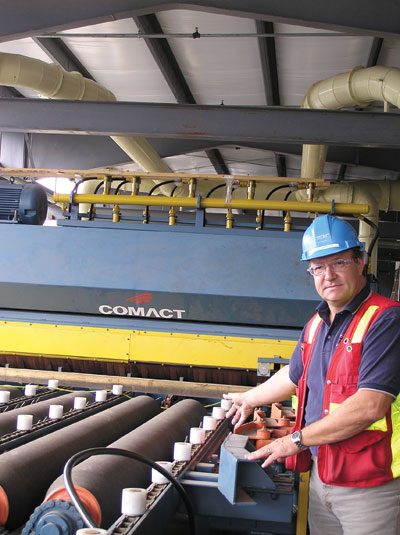 The profiling heads move up and down creating a wider range of product than the conventional square created with side cuts. But, with the new scanning and profilers, Morey tells, there is the option to take extra 2x4s on the top and bottom faces, and take a piece of dimensional lumber – 2×6 – from the centre.

Comact area sales representative Bob Learmont says that Tolko’s stud application is not just unique, but its DDM6 has a southern yellow pine arbour on the gang, a feature more often seen in southern US installations. While the profiles provide the shape of the wood to be cut, the arbor has the ability to move and extract that centre cut of 2×6 lumber as well as 2x4s, 4x4s, and 3x4s. “The mill wanted ultimate flexibility,” says Learmont.

The cut flexibility being achieved because of the installation is expected to drive more higher-valued product (J-grade 2x4s and 2x6s) to markets such as Japan. Morey says the seven to 10 % now going into the Japanese market is being pushed toward a new 25% goal with the new systems in place.

Battling for margin
One of the realities of dealing with MPB wood is that there are no broad-brush solutions to gaining uplift or even keeping mill production levels the same. Tolko has adopted a 4RM2 strategy (right log, right mill, right line and right time with maximum margin), and gains have been incremental.

The MPB recovery challenge extends to the planer mill. The difficulty, tells Morey, is that faster decision-making is needed in grading, yet there is less margin for error. No matter how experienced the graders, he says, the nature of the individual is to be conservative, plus human error and fatigue creep in. A dropped board here and there doesn’t seem like much, he says, but it adds up, and not just in pocket change. Morey says the mill held back some of its kiln-dried lumber near the time of the new planer line start up. “We were holding it back because we knew we can get an extra $200,000 to  $250,000 in lumber value,” he says.

The Comact Gradexpert will automatically grade at a speed of four boards per second, compared to an estimated one board per second achieved by manual grading. “It is also very consistent in grading,” says Morey. The new system, which uses C1-Scan geomoteric scanning plus vision data, can identify both biological and geometric flaws in the board. The software optimization throughout the new planer mill line right back to the 30-bin J-bar sorter has been Comact. Morey explains that the operation is attempting to gain efficiencies in handling, and using the same manufacturer right through brings fewer complications when the lug carrying the product to be assessed and trimmed is considered. The planer mill’s speed is expected to run at 225 pieces per minute.  To facilitate the fast flow of lumber on the new line, Tolko has opted for two close coupled Comact trimmers. For his part, Learmont says the first is a double-shaft, multi-saw trimmer while the second is a single-shaft. “It’s really like three trimmers,” he says, adding “With all the saws, I don’t think there is anything they can’t cut.”

Morey says this arrangement brings flexibility for cutting to different markets or customer specifications. The first Comact trimmer is being set up to handle 72 inches
or less, while the second Comact trimmer handles 92 5/8th inches and Japanese 2336 cuts. An Autolog grade stamp printer allows Tolko to place its name on each board, or customize the lumber production for the customer, and is also designed to run above 200 boards/min. The 30-bin, drag chain type lumber sorter will provide the mill with more flexibility in sorts as well.

“The upgrade will make the stud planer mill one of the most advanced in North America,” says Maralia.

The beetle wood will create more waste, but Tolko has on-site means of using it too, via a cogeneration plant, which provides heat and electricity to the veneer plant, sawmill, and planer mill, as well as providing over-load into the City of Kelowna’s
energy system.

Tolko is spending $2 million upgrading the efficiency of this plant and making it more environmentally friendly. The first project involves the installation of a state-of-the-art Rockwell Automation control system, which automates the combustion process in the operation’s three biomass-fired steam boilers.  Jack Carreau, shift engineer, says the system was fully installed on the main, larger boiler during the summer with the other two to follow. However, it has the capability to deal with the plant’s largest problem – moisture content in the biomass brought into the furnaces.

“When you dump a wet load onto a fire, it just smoulders,” he says.  But, Carreau calls the new system “amazing” as it automatically monitors oxygen levels and retains a needed 590 degree C temperature in the furnaces. This ability to react faster than a crew person can (although the three furnaces must still be checked by staff) results in a cleaner, more efficient burn.

The second air quality improvement project involves an extensive retrofit to the division’s emission control device, as precipitators have been installed that create an electric static charge attracting particulate. That particulate material – like a grainy sooty dirt – is sent to the landfill in Kelowna for use in landscaping materials.

Carreau says the cogen plant is working hard to ensure it fits within Tolko and the city’s needs. “There are not too many hog-fuel burning plants located within a municipal environment,” he says, adding the expertise developed is contributing to “unique understanding of this type of cogeneration plant.” That’s good, because there may well be more of these in the future as the appeal of bioenergy grows.

Editor’s Note: Many thanks to the folks at Tolko Industries for co-operating on this story in what is a very busy time for them and their staff. Best of luck ramping up. – SJ.