As a blood-curdling scream echoed across the dark western Finnish landscape, everyone in the nearby locale knew exactly what had transpired. No, it wasn’t something evil or sinister. It was just another North American sawmiller that had taken the plunge, and it wasn’t due to the low lumber sales and prices of the past four years. They had gone from the tropical-like plus 45  C (113 F) temperature of a traditional Finnish smoked sauna to the icy cold Baltic Sea that was hovering around a chilly 7ºC (44 F). 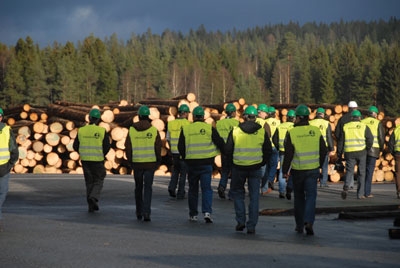 In this scenario, you don’t slowly climb in to the Baltic, you just take a running leap of faith from a dock that sits about 3 ft. above the water. For most, the time in the Baltic doesn’t last long, as the adrenalin that kicks in when you hit the cold quickly propels you to the surface and a fast exit from the sea. Then it’s back to the sauna for a warmup before doing it all over again. This was quite an experience for most of the 30 participants who went on the 2010 North American HewSaw Sawmill Safari. The group included sawmillers, technical experts, parts suppliers, and one Canadian Wood Products editor (that would be me), along with spouses. There were a few that didn’t want to, or couldn’t, brave the nighttime dip, but most did. It’s an experience they will never forget. There were, of course, many more “recreational” opportunities over the course of the six-day trip, but a promise on Day 1 to several worried participants when they found out a magazine editor was travelling with the group ended with a revised version of an old slogan, and “what happens in Scandinavia, stays in Scandinavia.” I can tell you that we toured hard during the day and played hard in the evenings. However, in this report I will focus on the mills we visited, the outstanding hospitality we received from our Swedish and Finnish hosts and the “G” rated content of our evening activities. The rest, will be left to your imagination.

Day 1
It was meet and greet time at our harbourside hotel in Stockholm, where all of us had the chance to exchange formalities, find out who was who and why they were along on the trip. It was also a chance to catch up with the HewSaw North America team of Ed Mayer and Jim Jamieson, along with Ed’s wife, and a true Sawmill Safari veteran, Carla. She has been on seven safaris over the past 10 years and is well versed in the Scandinavian culture, menus, sawmills, and of course, the shopping. The local team from the Veisto Group, which is HewSaw’s Finnish parent company, was also on hand. Kenneth Westermark and Taina Taskinen spent the entire week with us on the trip, while their “significant others” (this was a new English phrase Taina learned from the North American visitors and quickly adopted when describing her partner), Katriina Jordan-Westermark and Martti Kemppinen spent the first two days with us before heading back to their regular jobs in Helsinki.

Day 2
After a late night, morning came early and the suitcases were loaded onto the bus. The spouses stayed in Stockholm for the day and toured this beautiful city that is made up of islands, while the wood products contingent headed off to the AB Karl Hedin Sågverk Krylbo sawmill in Avesta, Sweden. It is an impressive mill featuring a HewSaw R200PLUS MSA (Moveable Saw Assembly) line that was installed in 2007. The mill’s diet is 70% spruce and 30% pine and it uses only one log length – 10 ft. – a scenario that had the North American sawmillers on the tour salivating at the thought of only one sort in the yard.

Feed speed at the mill is 230 to 650 ft. per minute (70 to 200 m per minute) and annual capacity is 89 million bf. The mill employs 54 people and is one of four sawmills owned by the company; two others are in Sweden and one is in Estonia. Other major equipment at the mill includes a Valon Kone VK5000-Combi 3R debarker and Sawco automation.

After the sawmill visit, it was back onto the bus for the return trip to Stockholm and a reunion with the spouses before boarding the MS Mariella for an overnight cruise to Helsinki. Crossing the Baltic Sea made for a turbulent ride and very little sleep for some participants – or maybe it was the late night in the
ship’s disco?

Day 3
Once in Helsinki, it was straight to work. First on the agenda was a 60 km bus ride to Lohja, which is northwest of Helsinki and the home of debarker manufacturer Valon Kone Oy. Lunch and a Valon Kone factory tour were the order of the day, followed by a 120 km drive to Finland’s second largest city, Turku. En route, we had time for an extended stop at a harvesting show where Finnish logging equipment manufacturer Ponsse had a logging contractor demonstrate the efficiency of logging Scandinavian-style. It was non-stop action as the harvester felled trees and the forwarder followed along behind to pick them up. The harvester paused just long enough for some of the spouses to jump into the cab for an up close and personal look at what it’s like to cut trees for a living. 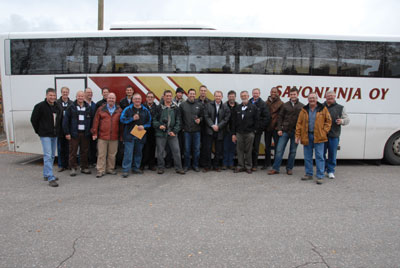 Following our arrival in Turku, there was only enough time to check into our hotel and drop off our bags and then it was back on the bus for our first sauna experience of the trip, and of course, the dip in the Baltic. The resort, which is called Herrankukkaro (Mama’s Pocket), was in a fairly remote location about 45 minutes from Turku. Our hosts at HewSaw/Veisto have done many sawmill safaris over the years and typically treat their visitors to a night of Finnish culture such as what is offered at Herrankukkaro. But even the Finns in the group said this evening was one of the best they have ever had, and a visit to the resort will probably be added to future safaris. In addition to the smoked sauna experience, the evening meal included a traditional Finnish feast.

Day 4
An early morning was on the agenda for Day 4 as we hit the bus for a two-hour ride to Pori and a visit to United Sawmills’ Seikku mill. This mill features a HewSaw SL250 Quartet saw line that was installed in 2002 and is fed by a HewSaw LogIn-2R log positioning system. This impressive, “only one in the world” fully automated machine line processes log diameters of up to 22 inches. Watching it take multiple asymmetric profiled side boards is a real treat for visitors. When operating on three shifts, the mill can produce 170 million bf (400,000 m3) annually and can run at speeds of up to 500 ft. per minute (150 m per minute). Logs are fed into the mill with a Nordautomation log infeed, while green sorting is handled by technology from Springer Maschinenfabrik. The mill also features Lisker log and cant scanning technology. Approximately 80 employees work at the Seikku mill, which is one of five mills UPM operates in Finland. 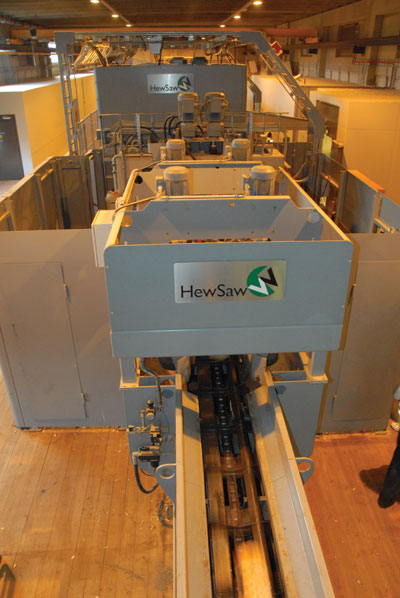 The next few hours were spent on the bus debating the differences between Scandinavian and North American sawmills, talking curve sawing technology and networking. It was hard to believe that just four days earlier, we hadn’t known one another’s names, and now we were trading production tips and sharing ideas on how to improve productivity and recovery.

Day 5
After a relaxing evening in a country estate hotel, it was back on the bus for a 135 km jaunt to the Metsäliitto Cooperative Vilppula Sawmill. Like the previous day’s sawmill visit, the Vilppula Sawmill features a HewSaw LogIn-2R feeding system, but, in this case, it is linked to a HewSaw R200 SE that was installed in 1997. The mill’s R200 line can produce up to 85 million bf (200,000 m3) annually on two shifts, whereas total production at the mill is 250 million bf (600,000 m3) annually on three shifts.

The afternoon of Day 5 was spent at JPJ-Wood Oy, which is just a 30-minute drive from the Vilppula Sawmill. This mill featured the newest HewSaw line we would see on our safari – a HewSaw SL250 Duo SE, which started production in 2009. The line features fast saw pattern changes, controlled curve sawing, a moveable saw assembly, and the option for double side boards in the cant sawing phase. It runs at speeds of up to 500 ft. per minute (150 m per minute) and can handle logs from 4 in. to 20 in. (10 cm to 50 cm) in diameter. The mill also features a Valon Kone debarker, a Nordautomation log infeed system, an Odden Verksted green sorting system and Lisker scanning and optimization equipment. Annual production at the mill, which runs on a diet of about 75% spruce and 25% pine, is just over 42 million bf (100,000 m3).

For the evening’s activities on Day 5, it was like an episode of the TV show Survivor as our HewSaw/Veisto hosts took us to another resort, where we participated in team-building activities and challenges, followed by another Finnish-themed dinner. The evening ended with a trip to the resort’s sauna, which was followed by a dip in the nearby lake. Being freshwater, the lake was actually colder than the Baltic and had a thin layer of ice on top. I can tell you from personal experience, the time in the water was extremely short.

Day 6
This was our last day as a group and it started with a few hours on the bus, followed by a boardroom meeting at the head office of Veisto in Mäntyharju. After meeting the company’s top brass, we took part in a technical seminar on X-ray scanning by Antti Kari of Bintec Oy, which manufactures Wood-X scanning equipment. A tour of the modern and efficient Veisto factory was next, with lots of time for questions.

After lunch, it was on to the last mill visit of the tour – the Versowood Oy, Vierumäki Sawmill in Vierumäki. The mill features a HewSaw SL250 Duo line for controlled curve sawing, which was installed in 2007 and, like several of the other mills on the safari, has a HewSaw LogIn-2R log positioner. Other major equipment in this mill includes 3-D scanning from Lisker, a Nordautomation mill infeed system and green sorting from Heinola Sawmill Machinery. The mill can run at speeds of up to 500 ft. per minute (150 metres per minute) and has an annual production capacity of 106 million bf (250,000 m3) on two shifts.

The trip ended with dinner at a Lappish restaurant in Helsinki before everyone prepared for their journey home. It was quite an experience for all involved and, while the guys visited the sawmills, in many cases the spouses took in other sites and local culture. The biggest challenge for most of us, me included, was convincing our wives that this sawmill safari wasn’t like a normal business trip to northern Alberta or New Brunswick.

It really was a lot of hard work, with long hours, and there was a lot to see in just six days, but it was a great learning experience and a fantastic opportunity to meet some new friends and business associates and to see what they are doing in sawmills in other parts of the world. And yes, that is the official line and we are all sticking to it. There was, of course, much more, but, as promised, what happens in Scandinavia, stays in Scandinavia.