Bear & Elephant move to BC
CTL supplier Ponsse’s Bear and Elephant that is, the Finnish manufacturer’s largest harvester and forwarder respectively. With over a 28-inch cutting diameter, the Bear is made for the BC Interior, and the 18-tonne capacity of the Elephant is made to match. They graced the Woodland Equipment site, as the forestry dealer recently took up the line. News has it the duo were going straight to the southern Interior woods for some demo days. Look to the next issue of CFI for early feedback from Interior loggers.

Bioenergy all the time
While the Prince George show was preceded by a full bioenergy conference, the Vermont show had its own heavy biomass and bioenergy slant to it, as these pics show. It was also all the talk of visitors to CFI’s booth, who stopped by to chat about the myriad of local projects proposed or underway. It’s an idea whose time has come to North America.

Getting loaded
It wouldn’t be the NELA show without the Prentice log loader contest, which was in action through the whole show. The winner in Vermont was Ben Hardwick from New Hampshire.

You’d be hard pressed to find any old equipment or ideas at this year’s Risley display in Prince George.  Front and centre was the Eclips line of prime movers suited to a range of applications, although front depends on your reference point. The machines on display were fitted with mulching heads, and indeed the machines get a lot of use in that form for right of way and oil patch work. But drop the mulcher, throw a blade on the other side, and the front becomes the back, and your Eclips is now a dozer. You’ll never look at one of these machines the same again, but the bottom line is a machine that can fit many needs from season to season, year to year, or contract to contract, a handy option in this ever-changing world of forestry. A wide selection of tracks, including pads for road use, adds to the flexibility.

The basic Eclips frame can also be set up with a forestry boom for a new breed of track harvester. The machine can be fitted with tracks to meet ground conditions, and boasts a fast ground speed. It was kitted here with a Kesla harvesting head, and Kesla’s Luc Roy was on hand answering questions about the business end of the harvester.

Just behind sat the latest incarnation of that original modular player, the Risley Rolly harvesting head. This one has a set of feed rolls as you’d expect, but in place of a bar and chain or Rotosaw has a skookum mulching drum. It is designed for standing tree mulching, and can be used for beetle-kill stands where you want to drive the mulching head right into the stump for 100% kill ratios.

Finally, an old friend, the Lim-Mit, is being given new life via an independent measuring wheel mounted inside the processing head. Available as a retrofit or on new limbers, it gives the best of both worlds according to Risley’s Dean Isley – Accurate CTL wood with limber production and durability.

Big butt lover
If you like big butts, you’ll be in good company with the Waratah 624HD “Big Kahuna”. The first of its kind rolled off production just in time for the Prince George show, and Waratah’s Rob Agassiz told CFI it’s ideal for loggers who insist on controlled torque heads and need lots of feed force. The 624HD comes with fixed wrist control and dual swing motors, so you put the wood where you want, and over 13,000 lbs of feed force lets you handle anything out there, from limby hardwoods in the east to gnarly poplar and aspen in northern Alberta or northeastern BC. A massive measuring wheel makes accurate lengths easy all day. Oh yeah, and for those big butts, it comes with a maximum 30-inch cut diameter.

Chain, chain, chain...
Old song, but new chain, as the Mesh brand from Babac Chains made its debut in Vermont. The manufacturer says Mesh chains offer better traction and tire protection. The tight pattern causes the chains to adhere better, for less chain walking on the tire.

Remember the Titans
Pierce Pacific Mfg (Denharco)’s line of big harvesting/processing heads, the Titans, were on display both at the supplier’s own site (Titan 23) and at Parker Pacific’s nearby site (Titan 22). The Titan 23 shown here weighs just under 6,000 lbs, is recommended for 20- to 30-ton machines, and handles 17- to 23-inch trees.

Looking to deal
Tajfun, a Slovenian manufacturer of forestry equipment was in Vermont looking for North American distribution for its products, including its line of professional firewood processors. The RCS 380 is seen here in action, and drew a crowd all show long.

And so Deere, and its western dealer Brandt Tractor are getting into fuel – biomass that is. The newly painted green 3680 Beast horizontal grinder was on site (better looking than the yellow if I get a vote) drawing double-takes, as was the latest version of John Deere’s 1490D bundler. Deere biomass specialist Mike Schmidt was on site, and told CFI that North American markets for the machine are about to take off. He has two potential deals close to moving ahead in BC and Ontario.

Operator-friendly chainsaw fuel
Consolidated Equipment & Supply out of Burnaby, BC, is importing Aspen alkylate fuel, an alternative fuel for chainsaws that is free from aromatic hydrocarbons such as benzene and toluene, as well as sulphur and olefines. The result is a chainsaw fuel that minimizes the health risks associated with exposure to gasoline and gasoline exhaust fumes.

No it’s not broken – Volvo’s new Level- Max is supposed to do that, and improves operator comfort and performance on broken terrain or slopes. See full introduction article and Great West Equipment’s demos on page 14.

And more bioenergy
Rotochopper’s man in Quebec, Bob Desbiens was on hand at the Northern Logger show, smiling as always. And why not? Business is good, interest in both Rotochopper’s diesel and electric grinders brisk, and Bob had plenty of installations in the mill and bush to talk about. Look to future issues for more on these machines in action.

Back to the future

Clam bunks are becoming more popular in parts of Canada again, as new, improved models emerge, and issues like spongy beetle-kill terrain become an issue. The all-new SMS Equipment booth (formerly Coneco) at Forest Expo had a Valmet 890.3 clam bunk, and booth staff told me that several just like it are already working in BC. We’ll see if we can’t have a look for a future issue. 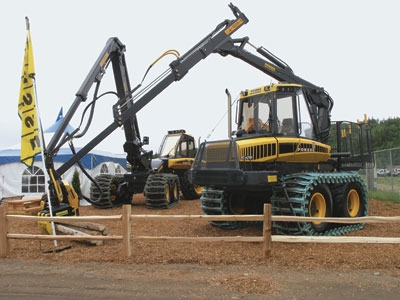