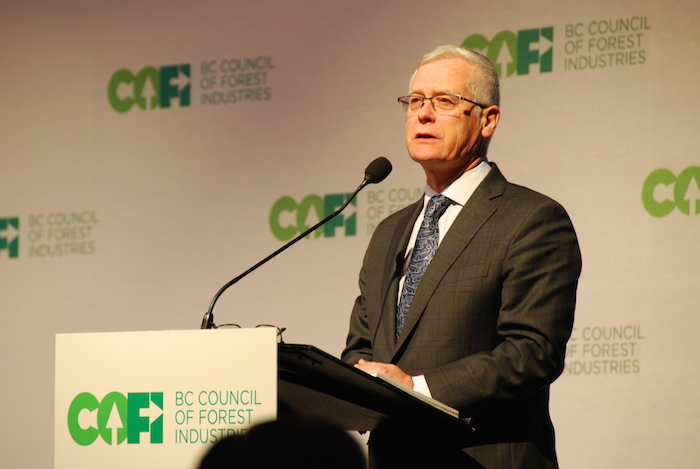 B.C.’s forest minister is looking to make the province a Canadian leader in mass timber products.

B.C. has already started the process as an early adopter of the 2020 National Building Code, allowing 12-storey mass timber buildings. The province also has a strong wood-use policy in place for government buildings and has pushed forward record-breaking tall wood buildings that showcase the potential of building with wood.

“We have the natural resource and the feed stock for mass timber production. We also have the expertise, working skills, technology and great investment climate,” Donaldson explains.

Premier Horgan has been critical of B.C.’s growing log exports, vowing to curb them and put more fibre into value-added products. According to a report from the Canadian Centre for Policy Alternative, since 2013 B.C. has exported nearly 26 million cubic metres of logs worth an estimated $3 billion. On July 1, 2019, the B.C. government revised its fee charged for log exports to be based on harvest economics. New criteria for log exports from certain geographic areas, based on local harvesting economics and subject to engagement and consultation with First Nations, are now in place.

The new measures – adding value to products, curbing log exports, plus better utilization of waste fibre – are part of two over-arching forest policy reviews being carried out in each of B.C.’s two forest regions, in a bid to revitalize the industry.

Donaldson says the B.C. government’s new view now is maximizing value instead of maximizing timber volumes, particularly in the Interior where the fibre basket is shrinking as mountain pine beetle salvage cutting ends. The annual allowable cut (AAC) is expected to drop by as much as 40 per cent in some Interior areas.

B.C.’s Interior wood (SPF, Douglas fir, and larch) are all species that fit with the mass timber profile – their slower growing seasons result in higher strength ratings, which is key since mass timber panels are a rival to concrete and steel.

“Government has a role to play both in the supply and the production sides,” Donaldson says, adding that the government will work to ensure fibre is sustainable in the face of reduced AACs. “We are concerned that there is a sustainable fibre supply to produce mass timber products.”

Meanwhile, on the production side, government can play a role in marketing and promotions. New government-funded buildings, such as the $1.9-billion St. Paul’s hospital, will feature mass timber products.

Donaldson says his government can also play a role in promoting manufacturers’ products and local construction skills overseas in external markets such as Asia, where trade missions are planned. “It is not just promoting the product but an exchange of knowledge of building codes and how we can build taller wood buildings,” he says, adding that having the resource, knowledge, and people are all elements that draw new investments into B.C.’s mass timber sector.

And the U.S. will also continue to be a solid market for B.C. timber products. Mass timber will pace building trends there for multi-family residential buildings and new office spaces. “The dimensional lumber market – single-family housing starts – have not seen growth in years, so mass timber products are creating another opportunity,” Donaldson explains.

Donaldson adds that the B.C. government is aware of the global trend towards more prefabricated and mass timber construction, particularly in Europe and Asia. Prefabrication is the trend in Korea, Japan and China, he says. “They don’t build on site and that is something we see in B.C. as a trend as well.”

“That is part of the reason why I was asked in my mandate to advance mass timber products,” he adds.

In the B.C. Interior, the minister has asked for feedback from all stakeholders including major licensees, local governments, First Nations and others impacted by the reduced cut levels. “We will be asking about plans for investment and again focused on mass timber,” he elaborates.

Mass timber construction results in less greenhouse gas emission, is an important element in mitigating climate change and is in line with CleanBC strategy, he concludes. Promoting mass timber products is key to ensuring a profitable and sustainable forestry industry in B.C.