March 30, 2016 - Before the recent collapse of oil prices, heading to the pumps was a painful experience for most logging contractors in Canada. A few years go, Frank Etchart, owner of Merritt, B.C.-based Nadina Logging invested in a new fleet of forestry equipment to counter the rising costs of fuel at his cut-to-length harvesting operation. The investment is paying off. 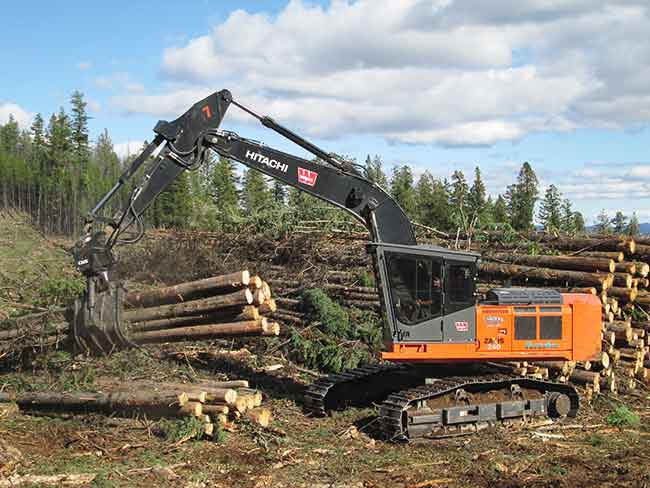 Etchart used to have an even wider variety of equipment in his fleet, but a few years ago he decided to upgrade due to high fuel costs.

“We were having to bring extra tanks of fuel in our pickups,” he recalls. “When I had bought [the old fleet], fuel was 55 cents at the time. A few years later and all of a sudden we’re having to cover $1.45 a litre for fuel.”

Etchart refused to cut his crew’s wages to counter the rising costs of the fuel, and chose instead to upgrade his harvesting equipment and invest in more fuel-efficient machines.

After reviewing all the available options, he decided to go with Hitachi to resupply the bulk of his fleet.

“They’ve been very good on fuel,” he says, when comparing them to his older fleet of equipment.

The beginning
Etchart’s career didn’t start in the bush like many of the traditional loggers throughout the province. He was born in Spain and raised in France before immigrating to British Columbia in 1969. After moving to the province, he decided to focus on building a career in another one of Canada’s resource sectors – mining. He studied mining engineering at the British Columbia Institute of Technology and ended up working in the oil and gas sector for several years, including being hired by an oil company to work overseas in the 1980s.

After returning to B.C. in the mid-1980s, he left the oil and gas sector and chose to start a new career in forestry working for three of his uncles in Merritt, who were approaching the age of retirement (they had originally started up Nadina Logging back in 1952 in the Burns Lake area). In 1989, Etchart decided to take over the family business. One of his uncles had just left the business to retire and another was planning on doing the same, so the timing worked out well.

When Etchart originally purchased the company, the six-man operation had the capacity to harvest upwards of 40,000 cubic metres of logs annually. The company’s fleet consisted of a feller buncher, one truck for hauling logs, and a few skidders. Fast forward to 2016, and Etchart’s team has grown to approximately 25 employees with a fleet and annual harvesting capacity that has grown exponentially.

The logging operation harvests upwards of 250,000 logs annually with the majority of the wood being pine, fir or spruce with a little bit of hemlock and balsam thrown into the mix. All of the wood from Etchart’s operations is transported to the Aspen Planers sawmill based in Merritt. Nadina Logging has enjoyed a long-standing working relationship with the mill that has lasted more than 45 years.

“We are loyal to the point of being stupid,” he says, jokingly. “They’re good people. Whenever we’ve had recessions they’ve always helped us and I’ve told them that. I don’t need to go somewhere else. Yes, I could have grown 10 times bigger if I wanted, but they’re a good company.”

With his investments in the latest fuel-efficient equipment and his never-ending loyalty to his crew, his company and his mill, Etchart has positioned Nadina Logging to continue its success well into the future.