Forest industry experts say the continued growth of U.S. housing will see a boom in lumber demand and prices. 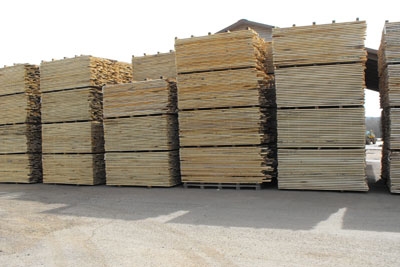 Prices for benchmark two-by-fours made from Western spruce Forest industry experts say the continued growth of U.S. housing will see a boom in lumber demand and prices.

Canada’s forest industry might be a little early to the party, but that’s only because U.S. homebuyers invited them.

Calls for a lumber “super-cycle” had the industry peaking in 2015, but that timetable was moved up by an unexpected and quicker rebound of the U.S. housing market, according to industry analysts. This recovery will also be fuelled by increased exports to China, restricted timber supplies in Canada and reduced sawmill capacity as a result of closures in North America.

“A year ago we said we’d be seeing peak prices in 2015 and now we’ve moved it ahead a year,” says Russ Taylor, president of Vancouver consulting group International Wood Markets.

He says lumber prices will soar next year before hitting all-time highs in 2014.

“We are already seeing some of this happening already. We are seeing the highest prices in six years right now – the middle of December, which is usually when you see the lowest prices of the year. The supply chain is very tight.”

Lumber prices jumped significantly in 2012. The composite lumber price – the price used to set the rate for the softwood export tax – is now hovering around $360 US a thousand board feet, up $100 from the beginning of the year. Taylor expects a 10% increase in 2013, and a further 10% jump in 2014, which would mean a record $440 US per thousand board feet of lumber. It is expected that export duties on Canadian lumber to the U.S. will essentially be at zero for the next few years.

Prices for benchmark two-by-fours made from Western spruce, pine and fir saw a 34% price jump late in 2012, which has spurred the forecast for a commodity super-cycle.

Getting back to a “replacement level” of housing starts in the U.S. bodes well for the industry, says Kevin Bromley, a partner with PricewaterhouseCooper’s global forest, paper and packaging industry practice in Vancouver. “The timber and solid wood companies in Canada are going to do well in 2013 and I think that’s accorded by the continued uptick in U.S. housing starts, combined with the fact that the inventory of existing homes is at historically low levels.”

Specialty markets will also be buoyed. “As U.S. housing comes back, the cedar market will come back and that is one of our bread-and-butter products,” says Rick Jeffery, president and CEO of the Coast Forest Products Association in Vancouver.

Paul Jannke doesn’t want to rain on anyone’s parade, but the lumber analyst at the Boston consultant Forest Economic Advisors thinks prices may fall in the early part of 2013. “Prices will not move up unabated. They’re going to go down, but they’re going to go up from where they averaged in 2012 by anywhere from 5 to 10%.

“North American softwood lumber prices are well above costs currently and they will only move higher in the first quarter of 2013. Because of this, mills will ramp up production to take advantage of the increased profitability. Meanwhile, dealers will build inventory. This combination of higher prices and inventory positions will cause dealers to move to the sidelines late in the first quarter, and as a result, prices will slip through much of the second quarter of 2013.”

Supply-side Economics
As demand increases from the U.S., North American timber supplies are expected to be constrained by issues like the mountain pine beetle in British Columbia, and harvesting cutbacks in Quebec, leading to a supply-side crunch, according to Taylor. He adds that the distribution chain in the U.S. has been reduced by half because of the recent recession. Many of the companies that survived are on credit watch, Taylor says, and are unable to buy enough lumber to rebuild their inventories.

According to Mark Kennedy, executive director of equity research at CIBC World Markets in Calgary, lumber capacity in Canada has dropped from its 2004 peak by around 10 billion board feet. “That’s lumber production we had last cycle that isn’t going to be available during this cycle, which is enough lumber to build nearly 800,000 homes.”

According to a FEA report, between 2008 and 2012, 146 mills, with a combined capacity of 15 billion board feet were closed in North America. That represented 19% of the 79 billion board feet that was still standing at the beginning of 2008.  It was also reported that 58 (22 in Canada) of those mills were dismantled and permanently removed from the potential supply pool, while 35 (15 in Canada) were idled.

The question is, where does everyone get their wood? “The whole industry is going to be pushing itself hard now just to keep up with the incremental demand growth that we’re likely to see over the next few years,” says Kennedy.

He expects to see more consolidation activity in the industry over the next two years. “The larger, well-capitalized companies are in a position to invest in technology – and sawmills are really about technology today – and many smaller companies may not want to take on the risk of investing millions of dollars to keep up with required improvements and the opportunity to sell will be there.”

Capacity is an issue because the supply chain was “ripped to shreds,” says Taylor, as half of North America’s lumber production disappeared during the economic downturn from 2006 to 2009.  The following two years were then more about survival than rebuilding the supply chain. Now that U.S. housing demand is improving, capacity will have to increase.

As mills look to ramp up production, they might be scrambling because they can’t get logging and trucking contractors and other skilled workers fast enough.

“Where are you going to find loggers?” asks Taylor. “These are things that have to be planned out a year ahead of time and many contractors are having issues accessing credit resources.”

According to Kennedy, this has resulted in inventory in the distribution system being at very low levels. “These are cyclical issues and they will be fixed with time and money, but it’s not like flipping a switch. It could take the better part of one to two years for the industry to really bring on incremental volume increases from the capacity that has been idled.”

Any reasonable forecast has North American lumber consumption increasing by at least 10 billion board feet, and according to Jannke and FEA, current operational capacity is not enough and will have to expand.

“There are a number of ways we expect to see capacity expand, including investments to increase capacity at existing mills, restarting idled or closed capacity and eventually the startup of greenfield mills.”

In a recent Wood Markets report, Taylor said Canada’s lumber production will plateau, allowing for essentially no increases in exports to the U.S. and will “therefore see its U.S. lumber import market share plummet to two-thirds of its historical level. By the end of the decade, B.C. and Quebec lumber shipments will collectively be lower by up to 10 billion board feet as compared to peak shipments in 2004.”

Jannke thinks B.C. mills have the capability to increase production in the short term and believes there is wood available. “It’s just more expensive because they have to use more spruce or green wood as the beetle-kill wood is used up and they’ll have to go further to get that wood, but they can still produce more.”

He also says there’s fibre in Eastern Canada. “But the real question is what do you do with the chips when you’re done with it? They can produce more lumber, but they have no outlet for their chips. What we’re seeing now and what we’ll see more of going forward is that the chips will be turned into pellets and sold off for energy and that’s going to take some investment, so it’s not a short-term solution.”

Capacity in the U.S. south shouldn’t be an issue, according to the analysts.

“There’s plenty of fibre to produce lumber in the U.S. south,” agrees Jannke. “They’ve been harvesting under sustainable levels for the past six years.”

Asian Demand
When the bottom fell out of the U.S. housing market, exports to China were negligible. “Now we ship four million board feet to China – that wasn’t there in 2004,” says Kennedy.

“The Chinese market saved the bacon of many Canadian sawmills,” he adds. “Not only could [China] take the volume, but Canadian mills could ship there without the 15% softwood lumber export tax that they had shipping to the U.S.”

Taylor believes exports to China will drop over the next two years as most Canadian lumber production will be needed south of the border.

“The market is much more balanced, but the U.S. market will continue to be the major customers, as Canadian producers will always go to the lowest-cost transportation market, but those markets in China and Japan are well-established now and provide excellent secondary and tertiary markets.”

Although imports to China fell in 2012, Taylor says that regardless, China will remain a wood products superpower. He says China has a massive fibre deficit that is expected to grow, and with strong U.S. demand, imported log and lumber prices will be pushed higher to where B.C. log and lumber supplies could effectively be auctioned to the highest bidder.

Traditionally, the Chinese market has bought mostly low-quality wood for scaffolding and forming concrete, but Taylor says they are starting to buy more high-grade lumber, which may continue as recent reports point to a heating up of the housing market and government economic plans that will drive wood products consumption and imports higher.

For B.C. coast producers, there is likely to be a change in what’s shipped to Japan, as U.S. demand continues to increase.

“It means that all of the Douglas fir logs that are being shipped to Japan right now will actually stay at home and be manufactured in the U.S.,” says the CFPA’s Jeffery. “And that creates room for the hemlock market. Right now, hemlock is hard to sell in Japan because they prefer Douglas fir.”

With capacity in North America to be constrained over the next few years, lumber from Europe could be imported, something that hasn’t happened in nearly seven years.

“There’s not enough wood to go around in North America without having imports,” says Taylor. “I see European imports increasing dramatically, just as they did from 2000 to 2003.

“They’re rubbing their hands, saying, ‘When are prices going to get high enough for us to come over?’ And it has started. In November, for the first time since 2006, European lumber was shipped to the U.S.”

Super-cycle?
According to Taylor, the expectation of strong growth in U.S. housing starts over the next few years, combined with a better balance in the housing inventory and a recovering economy, will overwhelm the U.S. supply chain at times, causing wood products prices to soar.

As long as demand grows in the U.S. and remains stable in other global markets, especially Asia, the super-cycle is likely upon the industry as is the reality of a tightening global timber and lumber supply.

But nothing is certain and questions remain.

“The biggest issue for us is the sustainability of U.S. housing starts and the economy,” says Jeffery. Worries about economic conditions in Europe and China are also on his mind and these thoughts are “not unique to the forest industry,” he says.

“They’re the three questions that plague the world economy and impact our industry directly.”