Oct. 28, 2013 - Ramping up a forest management operation after years of recession is a challenge, as woodlands crews try to balance the growth required to meet rising demand with the ups and downs of recovery. The mixed signals of the current recovery make timing re-nvestment all the more challenging.

Still, like most in forestry, Al Balisky is much happier managing those issues than the challenges of a shrinking market.

“We had our challenges through the long downturn, but we made it through,” says the general manager for Mistik Management Ltd. in Meadow Lake, Sask. “We were very lucky to have three mills that kept operating to some degree through it all. Still, it’s nice to be on the other side, where the challenges are growth rather than contraction. The future looks bright.”

Bright indeed, but it’s not a future for the timid. As the local sawmill ramps back up (see Canadian Forest Industries, July/August, p. 30), the demand for softwood grows. With that demand comes a more complicated fibre mix and the need for more contractors, operators, and above all, log haul drivers.

The company’s roots lie in the mixed-wood boreal forest gracing the region. While Norsask has long been harvesting softwood, the last 25 years has seen a more balanced harvest. That change came with the addition of the MLMP hardwood pulp mill in the late ’80s.

With the anticipated need for a large volume of hardwood for the BCTMP mill, Norsask and MLMP realized life would be easier with a single entity handling forestry. Mistik was founded in 1989, and from that point on, the company has been responsible for all aspects of forestry, from consultation and planning through roadbuilding, harvesting, hauling, reforestation and certification. In 1998, the Forest Management Agreement was transferred to Mistik’s name.

“We manage 1.8 million hectares in the Mistik licence,” Balisky explains, “but it’s not all active. Some 55 per cent is non-productive – classic boreal landscape with broken forest and muskeg. Of the productive part, it’s approximately 70 per cent hardwood and 30 per cent softwood. Between that and other areas we manage or purchase from, we have about 900,000 cubic metres of hardwood going to the pulp mill and OSB plant, which frees up the softwood we need for the sawmill.”

Yet as anyone who’s travelled through Canada’s central boreal region knows, it’s not that simple. The softwood is scattered, and large pockets of pure softwood are rare. When they do occur, they are typically pine, smaller, less desirable from a sawmilling standpoint. In contrast, the region’s white spruce logs tend to be larger and of consistently
higher quality.

With the sawmill running a single shift or less through the downturn, balancing the harvest diet was relatively easy. With Norsask adding a partial second shift this spring and looking to make it a full shift this fall, life becomes complicated for Balisky’s team.

Up until this spring, poor markets had kept the sawmill’s log requirements relatively low. That situation allowed Mistik to find the wood relatively close to home and to focus the harvest on the more profitable spruce during the worst of the recession. On a full two shifts and with its revamped technology, the sawmill requires more than 600,000 metres per year, volumes that Balisky admits will make life interesting.

One-stop shop
In theory, the wood is there. In addition to its own licence, Mistik secures a fair number of private wood purchases as well as volumes off the Prince Albert Forest Management Area (now managed by Sakaw Askiy, formerly by
Weyerhaeuser). In practice, getting it affordably while meeting other constraints is complicated. Factors include distance, workforce availability, alternative uses, and of course, log hauling.

“It becomes a seek mission for softwood as we look for areas that will give us the right balance for the two mills as the sawmill ramps back up,” Balisky says. “Softwood is the limiting factor, and so there is a balancing act, as the hardwood users only want to go so far for their wood. That puts us in a tough position as we strive to optimize the wood flow for both mills. In the end, there are a lot of compromises made,” a role that explains Balisky’s easygoing, diplomatic nature.

On Mistik’s FMA, three distinct groups accomplish the harvesting work. Two larger contractors – Almar Limbing and Waterhen Forestry (100 per cent owned by Waterhen Lake First Nation) – handle 350,000 and 200,000 cubic metres respectively, while an array of smaller owner/operators in the north bring in a combined 150,000 cubic metres.  The latter are directly managed by Mistik staff, who arrange the teams and co-ordinate roadbuilding through to the haul. Balisky admits there is more involvement with single owner/operators, but adds that it allows local entrepreneurs to enter the business.

Still, the current system is much simpler to manage than in Mistik’s early days, when much of the harvest was done by chainsaw and line skidder. At one time Mistik had close to 50 employees; now they are down to around 10 staff.

Mistik’s harvesting range also shrank with the recession. The far northern reaches of the licence span some 300 kilometres north of Meadow Lake, and have not been economically accessible in poor markets. While the
farthest reaches may never make economic sense, Balisky is looking at going further afield, a move that would require adding to his contractor force. And unlike some other operations, parachuting an outside contractor in is not an option.

“We’d be looking at creating a contractor force from the areas further north where the harvesting would occur. It’s more work perhaps in the short run, and will take longer to establish, but we have an obligation to make sure our forest activities benefit local communities. It’s an approach that has worked really well, but it will constrain the pace of growth as we rebuild from the grass roots.”

Like many in the industry, Balisky is understandably cautious in restarting owner/operator crews in areas that were hard hit by the recession. Timing those investment decisions with the market recovery is tricky, and he notes that given the capital investment required, some form of commitment on industry’s part would be necessary.

In the meantime, Mistik is looking to its three established logging suppliers to meet the rising demand. Balisky says they have responded well to the new opportunity, staffing up and modernizing gear.

Not surprisingly, a big challenge in this first growth year has been log haul drivers. In fact, Balisky recently had meetings to launch a log haul driver course through the local employment centre. Using the established curriculum of the Northern Resource Trucking courses developed for the mining sector, they hope to add a log haul specific component to round out the training.

“It’s unbelievable this year. We’ve got the iron, but can’t double shift to get the wood out. It’s a big bottleneck for us. I think we’re so used to the industry that we forget that driving a logging truck is no small matter. Not everyone wants to drive a 62,500-kilogram truck down an icy logging road. We have work to do.”

Certified management
In addition to the day-to-day forestry operations, Mistik manages everything from 20-year and annual operating plans to certification and the ever-important community consultation (see sidebar). The staff handles CSA, FSC and ISO 14001 certification, including chain-of-custody.

Balisky characterizes reforestation here as simple, with aspen and jack pine essentially “popping back at you.” In hardwood stands, the approach is basically to do nothing, as the stands will naturally, even vigorously, regenerate to hardwood. In mixed-wood stands with a heavy jack pine component, crews will scarify the area to encourage jack pine cone regeneration, and follow up in cases where some replanting is required.  Only in areas containing white or black spruce will any significant investment be required, with crews replanting to spruce.

“We’re typically planting about 700 stems per hectares,” Balisky explains. “We used to plant as high as 2,000, but we’ve found that seedling survival and growth in our mixed-wood conditions are excellent, so we’ve reduced planting densities.”

Looking ahead, Balisky is confident of the operation’s future, and feels the combination of players from the mills through Mistik staff to the contractors are in a good place to handle the challenges of growth.

“It’s going well, but in the long run it’s all about relationships up here. If we keep that focus, we’ll do well. Our contractors are very much part of the family at Mistik, and as long as we can help them be successful, we’ll succeed.”

Beyond the open house
While public involvement is the watchword of forest management today, and required by all major third-party certification schemes, Mistik has taken the approach further. The company has nine co-management or advisory boards that are consulted on a regular basis, and thanks to its CSA certification has also had a single public advisory group for almost 10 years.

The details of stakeholder involvement can be found on Mistik’s website (www.mistik.ca), but as operations manager Al Balisky explains, almost from day one they have worked with First Nations communities to manage concerns around forestry.

“Forestry has a big footprint, and if you don’t have dialogue with local communities you’ll step on someone’s toes. Instead of the open house route, we’ve developed co-management groups with the intention that all stakeholders involved on the landscape, from cabin owners and trappers to outfitters and wild rice growers, should come together as a group and think about how things should occur and where.”

The co-management boards are based on local administration areas, so they mirror existing political and community boundaries and typically involve 200,000-cubic-metre supply areas. The mills pay 50 cents per cubic metre for wood harvested inside the areas to help fund the boards, whether for travel or just so communities see some direct return from forest activities aside from the employment and business opportunities.

“Sometimes it’s a chief and council if that makes sense, with other parties coming in on the side. In other cases the boards were established before Mistik came along, and we’re another user around the table. Either way we try to facilitate that public involvement.”

At the end of the day, Balisky says, it’s all about relationships. “Those start with communication.” 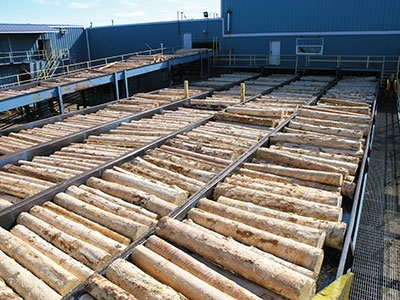