Sept. 5, 2014, Englehart – Steven Nychuk and his company's drivers must be prepared for just about anything.

As an excavating and log hauling company based in Englehart, Ontario, S Nychuk Excavating's trucks routinely hit deep potholes and hard knobs and climb or descend steep hills when delivering logs from contract sales on Crown forestlands in Ontario's boreal forest region to area mills. Nychuk's trucks haul various species of logs including jack pine, white birch and balsam fir as a subcontractor for other contractors with loggers, skidders and other logging equipment out in the woods.

When hauling logs, Nychuk trucks average about three trips per day, generally at a gross weight of 57,000 kilograms or about 125,000 pounds on each trip. The trucks also pull over-dimensional loads on float trailers with four or five axles. The over-dimensional loads generally consist of the company's own loaders or various equipment for road building and paving contractors.

"We need trucks equipped for a variety of on-highway and off-highway hauling," said Nychuk. The company recently took delivery of its first Kenworth T880, equipped with air suspension, a 52-inch sleeper, a 500-hp PACCAR MX-13 engine and an 18-speed transmission. The T880 is assigned to his father-in-law, Carson Presseault.

For more than 25 years, Nychuk has relied on Kenworth trucks, and local Kenworth dealer Timmins Kenworth and New Liskeard Kenworth in northern Ontario to assist the company in choosing the right specifications for those trucks. The company operates a fleet made up of three tractors, including the new T880, to haul logs and equipment and three straight trucks with dump bodies to haul gravel and aggregate. Its usual Kenworth truck of choice, the Kenworth T800, a popular mainstay in the logging industry, has provided the company a stout, reliable platform for years.

While logging companies are typically hesitant to try something new, Nychuk gave the Kenworth T880 a try at the recommendation of Timmins Kenworth.

"When you see the Kenworth T880, you definitely see a difference in how it looks," Nychuk said. "It's certainly caught people's attention out there in the bush. Loggers really like its look."

But the biggest differences with the Kenworth T880 that's caught Nychuk's attention, and the attention of other logging truck operators, involve the productivity gains its new features offer. Its larger panoramic windshield allows the driver to see more of the road.

"One of the major reasons I bought the Kenworth T880 was its simplified wiring harnesses," Nychuk added. "It's clear to me that when Kenworth engineers designed this truck they took into consideration the needs of truck operators for a more simplified layout. It makes for much easier servicing."

Nychuk also appreciates the performance of the 500-hp PACCAR MX-13 engine. It offers all the torque and horsepower drivers need to pull heavy loads even though it has a smaller displacement than the standard 15-liter engine the company typically chooses.

"The Kenworth T880 has a shorter sleeper - 52-inch instead of 60-inch, but it still feels a lot bigger," he added. "When Carson moves between the seats, he can actually stand up. It's a much more comfortable work environment for him."

Its larger panoramic windshield allows the driver to see more of the road. And though it may seem simple, drivers really like the truck's new mirror set-up, Nychuk said. "Where the mirrors are located on the Kenworth T880 makes it much easier for drivers to navigate in and out of a log yard and to see where loggers are standing when they are out in the bush."

Nychuk said his company generally replaces trucks every three years, since they travel an average of about 120,000 kilometers annually. Having good equipment that not only looks good, but also provides reliable service to contractors is key to the company's success. Nychuk said the typical high resale value of a Kenworth truck makes it easier to follow through on that aggressive trade cycle.

"We're looking forward to getting the same high resale value for this Kenworth T880 that we get from our other Kenworths," he said. 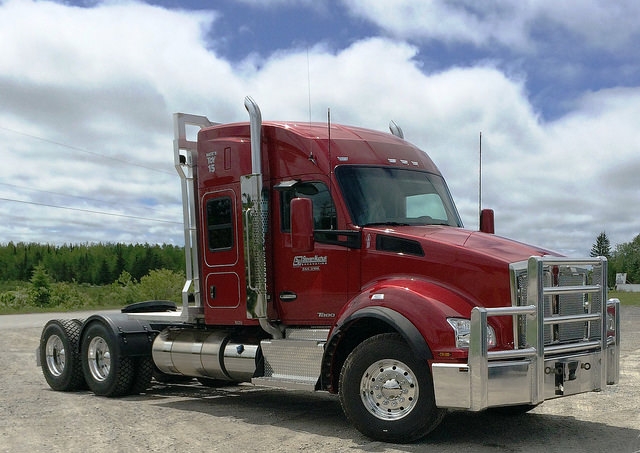