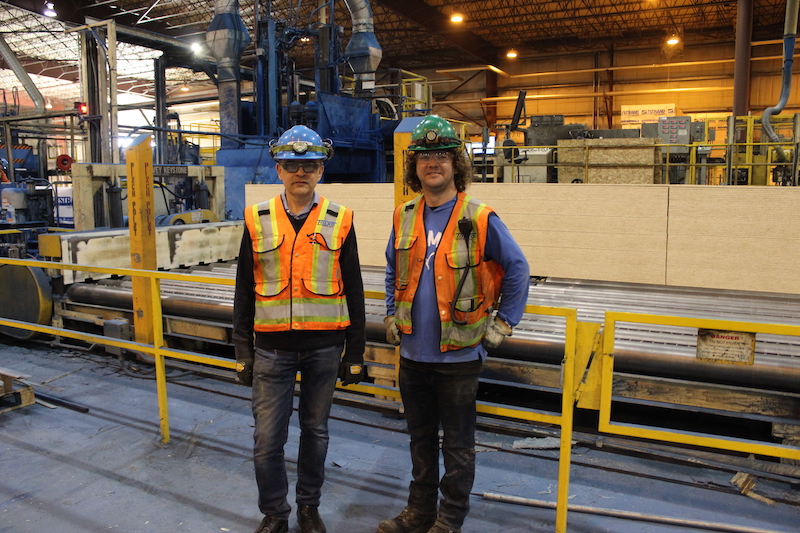 With the number of curtailments and mill shutdowns announced in the first half of 2019, it might be surprising to learn that one mill is making a comeback. But that’s exactly what Tolko Industries’ oriented strand board (OSB) mill in High Prairie, Alta., is doing.

The mill, which started operating in the mid-1990s, was shut down in 2008 as a result of the housing crisis in the U.S. But, as Andrei Dolgirev, Tolko High Prairie’s plant manager, tells CFI, the company “kept the mill in working order and in reasonable shape for restart.”

In the beginning of 2017, the company decided to restart operations for two reasons. One, the market for OSB started to improve. The other, Dolgirev says, “was that this mill built by the owners, the Thorlakson family, is an important part of the company’s product and geographic diversification strategy. Over the years that Tolko has operated in northern Alberta, they have found the availability of sustainable, quality log fibre and business-friendly rural communities to be effective hosting conditions for the forest products industry.”

Tolko worked closely with the provincial government and local communities during the restart process and, in November 2017, produced its first board. Full production started a short time later in January 2018.

But like any major undertaking, there were a few challenges along the way. Since much of the equipment was idle for 10 years, there were some mechanical and technical difficulties, including rusted chains, bearings, dried grease, and outdated controls to address.

Troy Richardson, the mill’s operations manager, notes they also faced some problems with fibre supply during the initial production period. The mill uses 16-foot logs, mainly aspen, with a little bit of poplar.

“We didn’t have challenges in terms of quantity of fibre, but a bit with quality in the first part of the year,” he explains.

“Initially we had to buy a lot of wood from a private supply, and sometimes, some of it was lower quality, but now we are good,” adds Dolgirev.

But perhaps the biggest challenge the mill faced was hiring enough employees to run and maintain the equipment.

“Equipment doesn’t walk out,” Dolgirev explains, laughing. “A lot of engineers believe, I think, that perfect equipment will make perfect product, but the reality is, perfect people make perfect product. It was a challenge for HR to get such a large crew here on such short notice.” 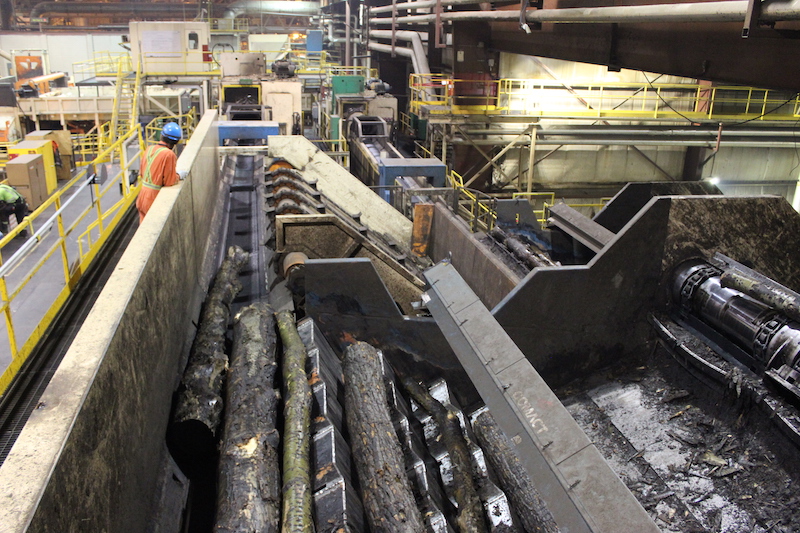 A jackladder and a Comact wave feeder take the logs up to the barker infeed conveyor. The logs then go through a Comact scanner and a Nicholson debarker.

While the mill was curtailed, part of the company’s HR strategy was to use it as a maintenance training facility managed by Northern Lakes College in High Prairie. Once restart was confirmed, the company launched an extensive recruitment program using different kinds of media. The company was pleased to have many returning employees from High Prairie and the surrounding communities, and very appreciative of the support from local government in High Prairie and Big Lakes County, along with other local communities, Dolgirev says.

Today, the mill employs 158 people, more than 20 per cent of whom are people from local Indigenous communities. Tolko also brought in many new people from outside the town of High Prairie.

“I think the return of well-paying jobs did quite a lot for the local area. Also, attracting people from outside the area helped to reinvigorate the real estate and other businesses,” Dolgirev elaborates. “Thirty per cent of people are from elsewhere, so we brought a lot of new people here.”

With so many new employees, safety was a key part of training, Richardson says.

“We brought in experts from our Meadow Lake mill to get us going, and in our first year, we had a safety gain share program,” he explains. “So, that first year, we didn’t pay anyone extra for production. Instead, we based our bonus payout solely on safety. It was a proactive system, so doing your pre-use equipment checks, filling out hard work permits properly, filling out risk assessments properly – all those kinds of things. We drilled that in the first year, and that’s how they got their bonuses.”

Despite the mill’s success with hiring and training new employees, like any forestry company, they have faced some difficulties with labour retention.

“We have a pretty young workforce, and working in this industry, it’s not for everyone,” Richardson explains.

“You’ll quite often see employees start, and if they’re not going to make it, you’ll normally find out very quickly, within the first two months or so,” he continues. “Once they get through the two- or three-month hurdle, then the retention is normally quite good.”

“It’s like a marriage,” Dolgirev adds, laughing. “You always have a critical point in the marriage – if you pass that point, it will probably last for a while. It’s the same with employees.”

“I would estimate that our retention rate was quite usual for projects like this,” he continues. “In terms of what we did, Tolko has quite good benefits, they provide a lot of things – they provide some location support, for example – and I think it helped us to mitigate this negative factor.”

A company from a local Indigenous community runs the mill’s wood yard under contract, unloading logs from trucks into piles. The logs are chosen from alternating piles to ensure good rotation of logs.

“Then they take the logs from the piles, load them on a truck, bring them to the loading area, and we load logs into ponds with water,” Dolgirev says. “This creates uniform moisture and helps us to control the temperature of the logs.”

Tolko has invested in two new ponds, which were installed by New West Mill Installations Ltd. From there, a jackladder and a Comact wave feeder take the logs up to the barker infeed conveyor. Then the logs go through a Comact scanner, which determines the logs’ size and shape, and calculates the appropriate space between logs for the Nicholson debarkers.

After debarking, the logs go to two decks, then through two Kadant stranders, where the logs become strands. “Then those strands go to the wet bins, an intermediate buffer storage. From the wet bins, the strands go into Wolverine Proctor conveyor dryers, then through screens to screen fines out of them. Then from screening, product goes through the dry bins, another buffer, and from the dry bins into blenders.”

The mill has two blenders to handle two different kinds of resin, including methylene diphenyl diisocyanate (MDI). From the blenders, the strands go into forming bins, where the orientation of the strand boards is determined.

“We form four layers, each one in the right direction, and then it goes to the press,” Dolgirev explains. “We press 12 boards at the same time. Then we unload it, it goes through the saw, and we cut it to the size of the panel, palletize it and strap it using a Samuel Strapping Systems strapper, and then it goes to a warehouse.” Finally, the mill’s products are shipped either via truck or with rail cars.

Dieffenbacher manufactures most of the mill’s press and forming equipment. The stranders and two new pocket batch feeders are from Kadant Carmanah Design, while the mill’s cutting equipment comes from Giben. A Schenk conveyor system is used throughout the process to move the boards. 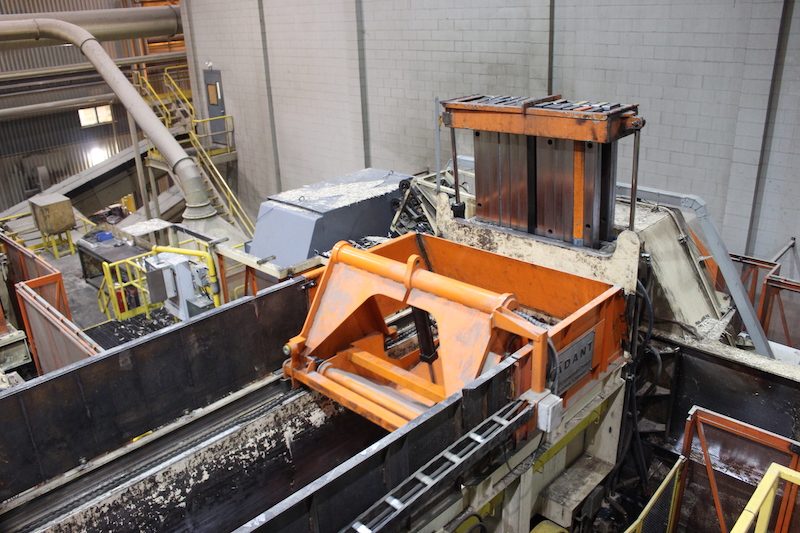 After debarking, the logs go to two decks, then through two Kadant stranders, where the logs become strands.

“We have measuring devices installed in defined locations where we have control parameters,” Dolgirev explains. “We purchased very modern sensors because this mill was shut down in 2008, and in the past 10 years, everything related to measurement in this industry expanded substantially.

“People developed a new style of measurement devices, new methods, new systems, so we are now installing those, trying to get us up to speed, and we are trying new things,” he elaborates.

Overall, to get the mill up and running again, Tolko invested approximately $65 million in operations, initial working capital and capital improvements, Dolgirev says. The return on investment will depend on the market and lumber prices.

“We’re still in our ramp-up stage, so we haven’t yet reached what the mill was doing before it shut down, just on an annual basis,” Richardson says. “With the capital improvements, we’ll probably only really see the full benefits of them towards the end of this year or early next year.”

The goal is to return to the mill’s former production levels – 650 msf of OSB – by the end of this year.

The majority of the OSB is exported to the U.S., although some stays in Canada and a small amount goes out to Asia.

As part of their commitment to sustainability, Tolko uses as much of the log as possible in its production process. In High Prairie, for example, they use the bark from the debarking process as fuel.

“All the building heating, press heating, dryers, everything is going on our source,” Dolgirev elaborates. “We’re quite environmentally friendly. We use 99.5 per cent of the wood we have. So, we are not wasting any wood – everything is going to a good purpose.” The only external energy used at the mill is electricity.

Forest management has been an important focus for Tolko since restarting operations at its High Prairie mill. The province of Alberta is working through several policy revisions regarding resource use in government-owned tenure. This has required extensive planning and development by Tolko’s foresters, as harvesting permits were secured for the mill’s needs. There continue to be challenges in building product markets in North America, so the High Prairie mill continues to focus on areas the mill team can control, such as cost and quality. But for OSB, “if the economy keeps growing, people keep buying houses and the industry will keep growing as well,” Dolgirev says.

“We want to develop the mill into one of the top performers in the industry, in regard to productivity, cost, wood use and efficiency,” he adds. Once that is achieved, he believes the business will better be equipped to withstand periods of low pricing in market cycles.