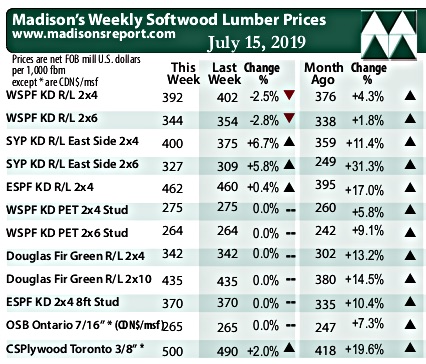 Until Tuesday all eyes were on trading of softwood lumber futures on the Chicago Merchantile Exchange. The July contract closed Monday unchanged at $360. By Tuesday morning the September contract was down $12 and trading at $336, with little optimism of the recent price drops reversing direction. For it’s part, cash price (wholesaler, “print”) for benchmark construction framing dimension softwood lumber commodity Western Spruce-Pine-Fir 2×4 (net FOB sawmill) was down $10 on the previous week, at U.S. $392 mfbm. At producers, sawmill order files were barely longer than a week, although most manufacturers were quoting a two-week order file.

In Eastern Canada, the annual summer construction and forestry two-week break could not come soon enough. Among players in the west there were rumours circulating of still more curtailments and down-time. The more cynical looked at the job action last week on the coast as more of a “mutually decided” curtailment than a labour dispute.

Prices of most lumber commodities were flat or slightly down as the market faltered following July holidays in Canada and the U.S. — Madison’s Lumber Reporter

Those who lost on the downside Monday when the July lumber futures contract closed will try to recover, if there will be a sales run after Labour Day and in time for the September contract close. In the cash market, while demand was not encouraging, recent production cuts have kept supply in line. Expectations would be for prices to moderate along current levels until the end of August, unless something drastic happens (like severe fires or storms).

The U.S. housing market looks tepid at best, but not because people are not looking to buy property. The long-discussed labour shortage has come to the fore, with transportation companies, construction companies, and a forest operators all suffering from a terrible lack of trained staff, with no solution coming in the short term. A recent update is available here. The results of a recent U.S. contractor survey is here.

A palpable two-tiered market persisted in Eastern Canada, as secondary suppliers did the majority of wheeling and dealing while sawmills remained much quieter. — Madison’s Lumber Reporter

In the west, buyers of kiln-dried Douglas-fir commodities apparently got enough inventory in recent weeks to avoid having to take any desperation deals for the time being. Now customers were in a “wait and see” mode which they hoped would eventually force current price levels at sawmills to break. Prices were flat nearly across the board as producers attempted to out-wait buyers, hanging on to July 22 order files. In the northeast, meanwhile, eastern stocking wholesalers saw the flat trend of the past fortnight extend into this week as buyer activity was muted and demand slumped. Field inventories were fleshed out for the most part and construction activity proceeded at a decent but far from breakneck pace.

The below table is a comparison of recent highs, in July 2018, and current July 2019 benchmark dimension softwood lumber 2×4 prices compared to historical highs of 2004/05 and compared to recent lows of Sept. 2015: