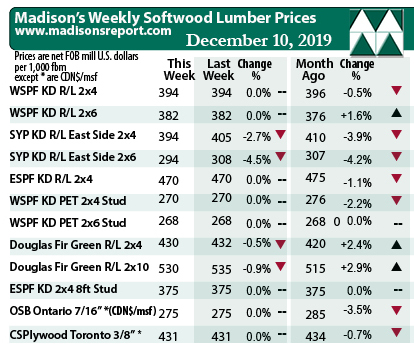 A significant uncertainty for North American business owners was resolved today as Canada, the U.S., and Mexico signed the new trilateral trade agreement, the CUSMA. Full details will be revealed soon, and the new deal will take effect Jan. 1, 2020.

Also this week the Western Wood Products Association released its latest monthly Lumber Track of Canadian and U.S. softwood lumber production and sawmill capacity utilization data, for September 2019. There is not much improvement in the figures, since all the sawmill closures and curtailments over this summer. However, the currently-stabilizing North American construction framing dimension softwood lumber prices suggest that supply-and-demand are in good balance, as forest operators approach their usual year-end seasonal closures.

The price of benchmark lumber commodity Western Spruce-Pine-Fir KD 2×4 #2&Btr last week was unchanged from the week before, still at US$394 mfbm (net FOB sawmill; cash price, or “print”).

Most players were focussed on logistical concerns as they strategized for year-end. – Madison’s Lumber Reporter

Sawmill order files were basically to the end of the year; even as shipment times were exacerbated by deepening winter weather and the recently-resolved CN Rail strike. – Madison’s Lumber Reporter

The below table is a comparison of recent highs, in June 2018, and current December 2019 benchmark dimension softwood lumber 2×4 prices compared to historical highs of 2004/05 and compared to recent lows of Sept 2015: