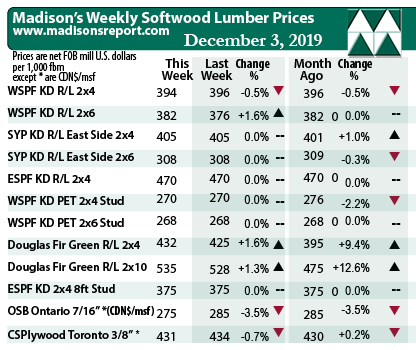 Dec. 10 is the deadline for retirement of two of the three remaining Appellate Judges at the World Trade Organization, where there are currently disputes revolving around North American softwood lumber. This WTO appellate panel, which usually has seven people, now only has the legal minimum of three, until Dec. 10. Following years of pent-up U.S. frustration over the behaviour of the WTO’s ultimate dispute-resolution body, the administration of President Donald Trump began blocking the appointment of new panellists. As a result, the group’s appellate body will stop functioning next month, plunging into uncertainty and casting a cloud over future ones.

The uncertainty stemming from the panel’s dissolution would touch every country with business before the WTO, including Canada.

Experts recently gathered at an event in Washington, D.C. where they discussed the consequences of the WTO becoming paralyzed.

The price of benchmark lumber commodity Western Spruce-Pine-Fir KD 2×4 #2&Btr last week dropped -$2 to close Friday at US$394 mfbm (net FOB sawmill; cash price, or “print”). Recovering from drops in autumn, last week’s price is also -$2 less than it was one month ago. Continuing to gain ground after severe lows, compared to one year ago this price is up +$40 or +11%.

With so much production volume taken out of the equation in 2019, supply continued to lag behind demand, even during the quiet and slow stretches – Madison’s Lumber Reporter

Eastern Canadian sawmills started out last week fielding strong demand, as the combined effects of American Thanksgiving and the CN Rail strike forced the hands of most buyers. By midweek, demand settled down as the strike was tentatively settled and U.S. players were absent from the office. With the slowdown in sales activity, producers began to build inventory at their facilities, secure in the knowledge that buyers’ depleted stocks would have them coming back sooner rather than later. U.S. Northeast construction was the very definition of making hay while the sun shone there last week, where hay was analogous to building projects. Eastern stocking wholesalers reported hearty sales activity while conducive weather was in effect, bracing themselves for the inevitable slowdown when winter weather arrives – apparently imminent. Vendors were just happy they could say that November has been amazing for the tri-state building market.

The below table is a comparison of recent highs, in June 2018, and current November 2019 benchmark dimension softwood lumber 2×4 prices compared to historical highs of 2004/05 and compared to recent lows of Sept 2015: