The systems have proven problematic in off-road environments, and the exemptions, granted Dec. 31, 2011, by B.C.’s Commercial Vehicle Safety and Enforcement (CVSE) agency, were the culmination of years of lobbying by the Central Interior Logging Association (CILA) and its members.

In a notice issued to inspection facilities and authorized inspectors dated Dec. 31, CVSE advised: “By means of this notice, the requirement for inspection criteria of anti-lock brakes as stated in the Vehicle Inspection Manual is amended so that vehicles equipped with (ABS) components that may not meet inspection criteria or that do not function as OEM and that operate primarily on industrial or forest service roads may pass a provincial inspection.”

And as for automatic slack adjusters, the agency issued an amendment notice the same day that read: “Air brake equipped vehicles with manual slack adjusters that operate primarily on industrial or forest service roads may pass a provincial mechanical inspection.”

The exemptions were hailed as a major victory by CILA, which, buoyed by its success, said it would turn its attention to lobbying against an air disc brake mandate in hopes of preventing any such regulation before it’s enacted. (Canadian Forest Industries magazine is not aware of any impending mandates for disc brakes. FMVS 121 in the U.S. requires heavy truck stopping distances to be reduced by 30%, but this has been achieved through the use of larger, more effective drum brakes, air disc brakes, or a combination of disc and drum brakes. The regulation did not specify the type of brake
required).

MaryAnne Arcand, executive director of CILA, says log haulers had no shortage of complaints about how ABS and auto-slack adjusters performed in logging operations.

“The key concerns had to do with maintenance and replacing parts,” she explains. “The ABS light was almost always on, because of mud and snow corroding or breaking wires. This was really more of a concern to log and off-highway trucks in areas of B.C., which operate in months of winter snow and ice, and mud in the spring and fall. In the case of auto slacks, my understanding is it had to do with them not functioning properly in mud, snow and ice conditions.”

Lloyd Inwood, owner of Quesnel, B.C.-based Inwood Trucking, was an outspoken critic of the technologies. Some of the problems his fleet has experienced include plastic brake valves broken by rocks; brake failure on a steep hill; spongy brakes on gravel roads; and overall poor performance compared to the company’s long log trailers that were purchased before trailer ABS was mandated in 2000.

While B.C. loggers are happy to bid good riddance to ABS and automatic slack adjusters, the exemption does raise some questions and concerns. For one, it appears suppliers were not involved in the consultations and there seems to have been no in-depth research supporting the exemption.

Tom Weed, engineering supervisor for ABS with Bendix, says he was “kind of caught off guard” by the exemption. “I don’t believe we were consulted on it, which they don’t have to do, of course…without knowing the rationale and the details, it’s really difficult to comment on.”

CFI has learned there was a high-level conference call with members of the Heavy-Duty Manufacturers Association,
during which it was decided not to take an official position on the exemption. Still, the announcement now has their attention because it appears to be the only such exemption that’s been granted anywhere in North America.

“I’ve never heard of an exemption like this being granted, nor have any of my colleagues that I’ve spoken to,” Weed says.
He was surprised to hear of the problems related to ABS use in the bush, noting Bendix has sold more than a million of its current ABS systems and it is performing to expectations in applications that are every bit as demanding as logging. Weed also noted there are ABS models available that offer an “off-road mode, where ABS operation is modified somewhat under these conditions, to improve the actual performance of the ABS in off-road conditions. But for that to work, the ABS has to be functioning.”

Another concern involves the ambiguous wording of the exemption. As noted above, the exemption has been extended to vehicles that “operate primarily on industrial or forest service roads.”

It’s no secret that logging is seasonal by nature. It’s not a stretch to think that a truck whose primary function is logging could also be used to pull lumber, chips or even general freight on-highway at certain times of the year. This raises the potential for the operation of trucks and trailers without ABS and automatic slack adjusters on-highway.

When asked by CILA for clarification on the language, Brian Murray, CVSE director, said:
“If a truck/trailer is being used on a logging road/resource road to assist in logging operations between the minimum mandatory six-month vehicle inspections, then it is deemed to be primarily used on an industrial road or FSR (forest service road). Logging shows can move multiple times in a year and create a multitude of differing off-highway kilometres run versus on-highway kilometres – depending on where the timber licence is located in the bush. Some of these trucks may also be used to haul other resource commodities or lowbed equipment on FSRs and industrial roads during spring break-up for road repairs or construction of access roads and to mobilize fire equipment during logging down times. In the end it’s all about a braking system that functions properly, and a greater onus is now put on the operator and carrier to ensure this is done when presented with these options.”

It appears then, that the determination of whether a truck is in fact a logging truck, will be up to the discretion of the enforcement officers. Still, there seems to be little within the law to guarantee the truck won’t be used for other, over-the-road purposes in the months between its twice-yearly inspections.

“Without a functioning ABS system, a locked wheel doesn’t do anything for you,” Weed notes. “It has the potential to reduce vehicle stability, reduce vehicle steer-ability and the ability of the driver to put the vehicle where they want it. I would be concerned about someone driving a vehicle without functioning ABS and certainly, in this case, if they have been driving without ABS and then turn around and take it out on the road.”

Another obvious concern within the supplier industry is that other sectors and other jurisdictions will follow B.C.’s lead and grant exemptions of their own. ABS and automatic slack adjusters were mandated because they offer proven safety benefits. If certain pockets of the industry were to exempt the safety systems, it could be seen as a giant step backwards for trucking safety.

Still, loggers will argue a non-functioning system does little to improve safety, and in some cases can even hamper it. And they’re not likely to miss the technologies now that they’ve been excused from using them.

“In my opinion,” Inwood says, “there was very little thought put into mandating this system on logging trucks. We were just thrown under the category of general trucking.”

ABS & AutoSlack Exemption Update
On Jan. 1, 2012, logging trucks travelling off-highway the majority of the time were exempted from the requirement to have ABS systems and automatic slack adjusters. In order to take advantage of this exemption, you must have the Declaration Form in the truck at all times. The time qualification is over the six months between inspections, not by cycle or trip. CVSE is working with its inspectors and facilities to clear up any misunderstandings. See the updated bulletin at
http://www.th.gov.bc.ca/CVSE/vehicle_inspections/PDF/120411-AmendmentAnti-lockBrakesManualSlackAdjusters.pdf.

To qualify for this exemption an individual or Carrier’s vehicle(s) must operate a minimum of 55% by an overall cumulative total time or distance between inspection period intervals. In addition, drivers and carriers that want to exercise this exemption must go to the Vehicle Inspections website http://cvse.ca/vehicle_inspections.htm and print or download the Declaration of Exemption. The declaration must be sent to CVSE to certify the exemption with a distinctive mark and once completed will be sent back to applicant.

Effective May 1, 2012, on presentation of a completed Declaration of Exemption, Designated Inspection Facilities and Authorized Inspectors may pass the vehicle if certified with a distinctive mark by CVSE.

On disclosure of a completed Declaration of Exemption vehicles may pass a provincial inspection if so equipped with properly functioning manual slack adjusters and/or non-functioning ABS component(s). 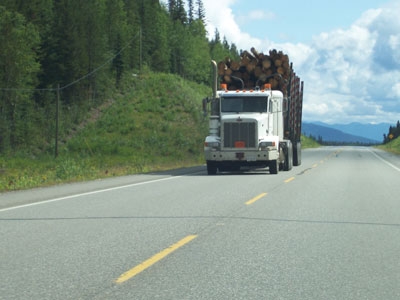