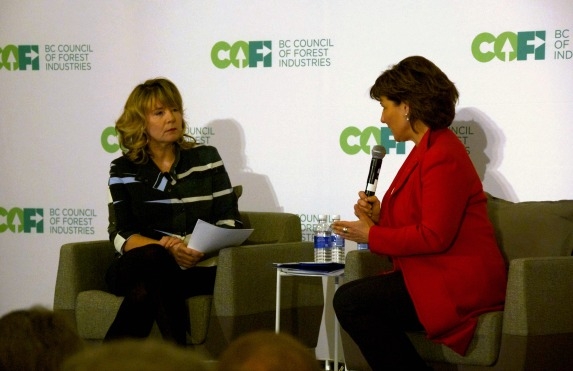 Despite the backdrop of looming U.S. softwood duties and shrinking timber supply, the optimism and pride Seraphim spoke of in his address as part of the CEO Panel seemed to resonate during the sold-out, three-day convention held April 5-7 at the Vancouver Convention Centre. It’s the first year COFI has held its convention outside of Prince George or Kelowna.

COFI president and CEO Susan Yurkovich welcomed attendees on Thursday morning with a strong message: “Forestry is an industry that matters,” she said. “It is and will continue to be the economic backbone of our province.”

That message carried through with B.C.’s forest minister Steve Thomson who confirmed 20 per cent of all shipments through the Port of Vancouver are forest products. “We produce some of the best products in the world and have the highest environmental standards in the world,” Thomson said.

The convention’s sessions kicked off with Jock Finlayson with the Business Council of BC sharing his outlook for the international and domestic economies. A growing global middle class bodes well for Canada’s forest products industry as that demographic looks to purchase new homes.

A panel on international markets followed Finlayson, with experts narrowing in on conditions that affect lumber exports to the U.S., China and India, followed by an analysis of the growing lumber production in Russia spurred by the low Ruble. Wood Market’s Russ Taylor said the narrative that the Russian forest sector is plagued by lack of infrastructure is incorrect. Russia has quickly become the world’s third largest lumber producer and is gaining market share in China.

Engagement is “not a check in a box,” Brandt said, rather it’s an ongoing relationship between a company and the First Nation community. Interfor, she said, works with 60 First Nations.

Sellars advised companies to learn about the history of the First Nation to understand their inherent rights and how the company can help the community reach its goals. While many Nations are open to business, they are also balancing their role as stewards of the land, Sellars said.

Davies, who spoke about the softwood lumber negotiations, said he’s happy with how the provincial and federal governments are handling the negotiations thus far. “I’m very pleased with the relationship we have with them as this unfolds,” he said.

Kayne stressed the importance of new markets for high-value products for Canfor. Tall wood buildings and the growing emphasis on environmental benefits of building with wood add up to big opportunities for the industry, he said.

West Fraser, Seraphim shared, has invested millions in its B.C. operations over the past 10 years. “That’s something we can be proud of,” he said. “We’re investing in the future in spite of SLA and in spite of the mountain pine beetle.”

Arkle, speaking last, said Gorman Group’s strategy is to diversify its lumber flow to maximize value of logs, which now includes agreements with 10 forest product companies within B.C. “I think that is a major advancement to retaining jobs and maximizing value,” he said.

Day 2 of the convention began with a community leaders panel with participation from the mayors of Prince George, Dawson Creek, Salmon Arm and the City of Port Coquitlam. Greg Moore, Mayor of Port Coquitlam, spoke about the need for urban centres and rural resource-based centres to have a better dialogue so that all residents understand the importance of the resource sector, particularly forestry, to the B.C. economy.

An innovation panel followed the mayors’ session, which gave the audience insight into how big data, drones, virtual reality and artificial intelligence can be used to advance sawmills.

Focusing again on the subjects of international trade and challenges from the SLA, Kristen Hillman, Assistant Deputy Minister of Trade and Policy Negotiations for Global Affairs Canada, spoke candidly about the status of the Canada-U.S. softwood lumber discussions to date.

“There is, unfortunately, an instinct [for the U.S.] to look inwards, an instinct to protectionism. We have to fight against that,” Hillman said. Part of that fight involves Canada’s lumber companies spreading a message about the interconnectedness of the Canadian and U.S. economies, she said. It’s not a one-way relationship, Hillman said, Canada is also the U.S.’s largest customer.

Premier Christy Clark wrapped up the convention as the final speaker, sharing her vision for how her government would handle some of the challenges facing the forest sector should the B.C. Liberal Party be re-elected on May 9. “We know that [SLA] is not just a forest industry issue,” she told the crowd. “We will only accept a deal that works for B.C.”