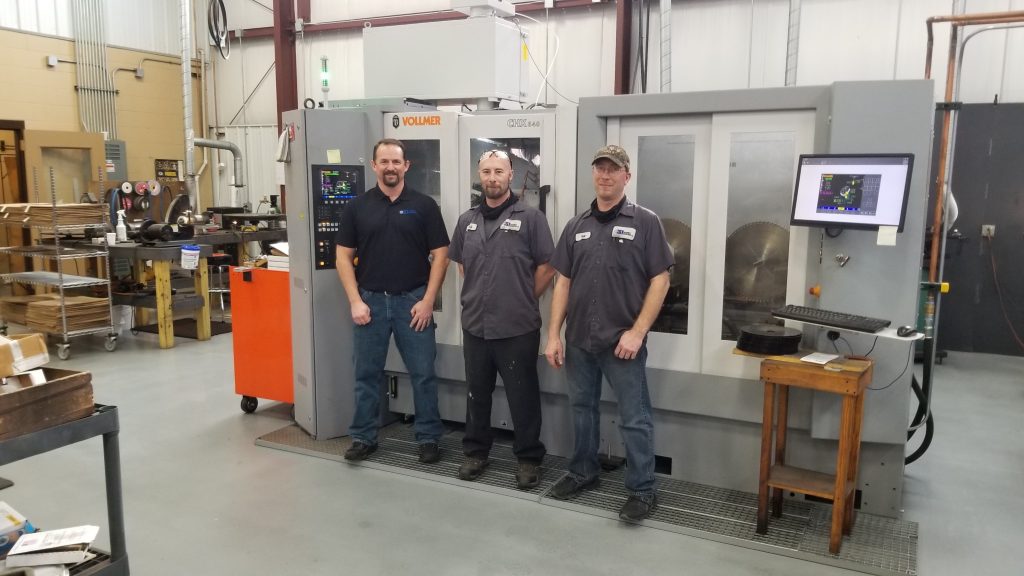 It’s a familiar story when an engineer leaves his job and sets up a business from his garage. In the case of Integrity Saw & Tool Inc., the foundations were laid in a basement in 1986 for this saw sharpening, HSS drill and end mill regrinding company that soon outgrew the basement, moved into the garage and employed family members to support the growth. It wasn’t until the turn of the century that this Wisconsin business really stepped out of its comfort zone to drive growth and expansion to another level.

It was the move to a 13,000-square-foot factory in 1998, followed by the appointment of Paul Reetz as the fresh-faced sales engineer, and the investment in its first Vollmer CNC sharpening machine in 2000 that set the company on a new growth trajectory. Now, the owner of Integrity Saw, Reetz recalls: “I was paid on a commission basis to bring in new business and for five years, we won 40 to 60 new customers every year. A lot of this was small family businesses, such as cabinet manufacturers, construction companies and the Amish community, all within a two-hour radius of our Fond du Lac facility on the edge of Lake Winnebago.”

With 13 staff and an output of 100 saw blades a week back in 2000, this output quadrupled to almost 400 blades a week by 2005. During this period, the ISO:9001-certified company realized that its predominantly manual saw sharpening equipment had to be upgraded for current CNC technology.

In fact, the company acquired a further three machines with an Akemat U10 and B10 arriving in 2005, followed by an additional Akemat U10 in 2006. The Vollmer Akemat machines were bought for sharpening TCT saw blades whilst existing manual machines were manufacturing and servicing HSS blades. This completed the purchasing of Vollmer machines for almost a decade, until the May 2019 arrival of the Vollmer CHX840+HS.

Alluding to this period, Reetz continues: “The saw sharpening side of the business had grown for almost 10 years, but unfortunately the 2008-09 global recession wiped out a lot of small businesses. Many of our circular saw blade customers witnessed the collapse of their businesses as fewer people invested in their homes and real estate. However, the production of round tools such as drills, end mills, router bits and special tools for the manufacturing industry weathered the market conditions far better. Round tooling for industry currently accounts for 80% of our business. With the COVID pandemic, there are fewer people buying cars and flying around the world, so our round tooling business for the manufacturing industry has naturally slowed down. However, as more people are confined to staying at home, people are investing in their homes and the saw division of our business is once again benefitting from this.” 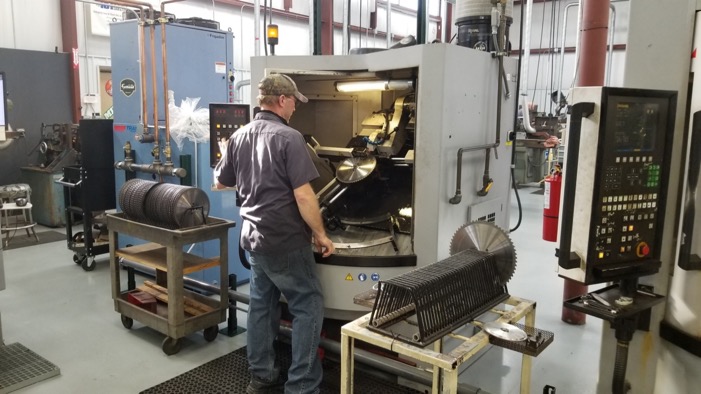 The COVID situation has seen people confined to their homes all around the world, as we all spend more time and money on groceries and eating at home. This has delivered a unique opportunity for Integrity Saw & Tool. With millions of wooden pallets in circulation in the U.S. food industry, Integrity Saw has partnered to regrind TCT saw blades for a leading pallet manufacturer. This new customer has ambitious plans to build multiple manufacturing facilities across Canada, the U.S. and Mexico – each plant capable of producing a pallet every minute.

“We knew we needed a new machine with automation to meet the demand. The Vollmer Akemat machines have been amazing and, aside from regular preventative maintenance, they have run every day since they were bought. The quality of the machines is amazing! It really is fortunate that we bought Vollmer and didn’t have to worry about it, because we knew they were going to be running. So, once you have experience with Vollmer, it doesn’t make any sense to look elsewhere. When it came to a new machine, Vollmer was the only place to look.”

COVID may have temporarily slowed the growth timeline for pallet production, but Integrity Saw is well-placed to support its new customer with its new five-axis Vollmer CHX840+HS for machining the tooth faces and tooth tops in a single clamping operation. The CHX840 is complete with the HS automation solution that enables Integrity Saw to load and process 28 blades unmanned. With a customer that will run its operations 24/7 and will require a new saw blade for every shift at every facility, the opportunity for Integrity Saw & Tool is considerable. 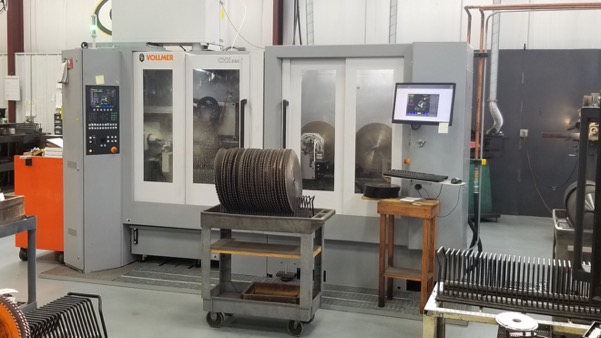 Integrity Saw did feasibility studies on the blades with Vollmer whilst it was simultaneously commencing the contract with its existing and ageing Vollmer Akemat machines. The 18-inch-diameter TCT blades have 70 teeth per saw and each saw blade can be re-ground up to seven times before being replaced or re-tipped.

Before the arrival of the Vollmer CHX840+HS, Integrity Saw was conducting four operations on three machines to complete a saw blade in 75 minutes – a machining time not inclusive of set-ups and changeovers. This process chain included stress relieving, then transfer to an Akemat tooth-face grinding machine and subsequently a tooth-top grinding machine and then the grinding of the ‘kick-back’ radius to reduce cutting forces on each tooth.

“When the opportunity came to work with the new pallet manufacturing customer, we knew we could not have even dreamed about doing that if we didn’t know that there was a Vollmer machine that can handle that workload. We make big decisions because we know with Vollmer we’re going to have great service, great training and we don’t have to know everything because we know we can ask Vollmer to get the answers so we can grow our business.

“When it came to programming time and repeated set-ups, it was approximately 90 minutes for each blade. The Vollmer CHX840+HS has cut this time by more than 60 per cent to 35 minutes with just one stress-relieving operation before the CHX840 completing all tooth and face grinding in a single set-up. We only did a couple of stacks of blades with the older VOLLMER Akemat machines, but the time study demonstrates the difference,” says Reetz.

For the 27-employee-company to have just two skilled operators running four Vollmer Akemat machines and the Vollmer CHX840+HS, the new machine has doubled the weekly output with the same number of staff.

As Reetz continues: “The two operators previously had the capacity to do 40-50 TCT blades a day on the Akemat machines – adding the Vollmer CHX840+HS means we can now re-grind over 100 blades a day. We work from 5:00 a.m. to 3:00 p.m. and the HS automation system allows us to set the Vollmer CHX840 machine in the afternoon and it will process up to 28 saws unmanned throughout the evening. If we worked a shift pattern, we could run the Vollmer CHX840 24 hours a day to gain more capacity. However, we are already looking at our next Vollmer purchase.”

Whilst the new Vollmer CHX840+HS has increased productivity and capacity; the benefits reach much further. Integrity Saw has recognized the facility to grind tooth tops and faces in a single operation has the potential to make single-purpose machines redundant in the future. With a single ‘compact-footprint’ Vollmer machine, Integrity can significantly increase output whilst reducing machine inventory and running costs, maximizing its 18,500-square-feet of factory space.

From a programming perspective, the operators undertook two-and-a-half days of training on the CHX840+HS and this was more than sufficient.

“Whilst the older machines have all the programs stored, the Vollmer CHX840+HS didn’t initially have that luxury. However, the easy-to-use CNC interface means our operators don’t have to program every blade from new – they can simply edit one of the hundreds of stored program templates within the software to rapidly generate a suitable program. This means a stack of 28 saws for unmanned running can be programmed in just over five minutes. We are continually adding more saws and programs to the CHX840 and this will help us as our production of saws for the metal cutting industry expands,” Reetz says.

Additionally, the operators no longer have to be concerned over grinding wheel offsets as the CHX840+HS automatically compensates for wheel degradation, ensuring that the precision and quality of the final saw in an unmanned batch run is as impressive as the first saw. The combination of probing, automated wheel offset calibration and the intelligent software on the CHX840 also eliminate the potential for operator error and collisions. 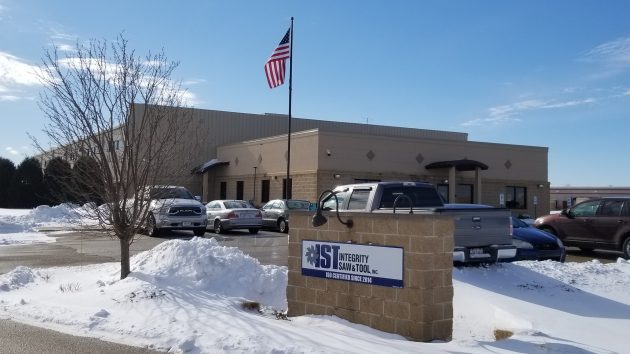 Looking to the future

When the pandemic gradually subsides, the Vollmer CHX840+HS will eventually reach capacity in line with the customer demands for saw blades for pallet production. Integrity Saw already has its sight set on a second Vollmer TCT saw sharpening machine with automation to meet these production demands, as and when they arise. Furthermore, the company has been so impressed with the Vollmer CHX840+HS that it is now considering the latest generation of Vollmer machines for its rotary tool division.

With regards to the TCT saw department, Integrity Saw is seeing increased demand from the metal cutting industry from solid bar steel stockholders and the Vollmer CHX840+HS will also have a part to play in developing this business.

“We are moving more steel industry saw blades to the CHX840, as 10- to 12-inch saws can be produced much faster. The production time for grinding the outside diameter and chip breaker can be more than 25 minutes on the Akemat machines, while the CHX is doing this in less than 15 minutes. Also, some 80 tooth saws can be finished on the CHX in eight minutes as opposed to 15 minutes on the Akemat with the chip breakers being added manually afterwards. The potential for savings is considerable and this is a rapidly growing part of our business. The Vollmer machines have proven themselves to be ‘bullet-proof’ and they are built to last. More than this, the technology and innovation are helping to drive our business forward,” concludes Reetz.

Related
Cut above: New and improved for the filing room
Testing chrome saws
GrascheUSA looks to BC market to supply saw plates
A cut above: a look at the latest saw filing technology