Einstein once said that we should make everything as simple as possible, but no simpler. Words to live by for today’s logger, where everything from public involvement, detailed regulations, complex machinery, and revolving staff require contractors to juggle many issues beyond their control. Where they do have control, simplicity works best. 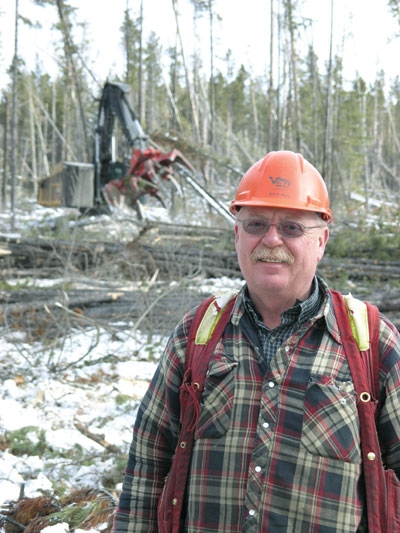 Alberta logger Niel Graham has this figured out, running a single side and streamlined process, using just two basic suppliers for all his gear, and sending all his wood to one main customer.  The transplanted BC Interior logger came to Cochrane, AB some 10 years ago, a province known for making business simple in its own way. His company ESC Harvesting has worked solely for Spray Lake Sawmills (SLS) since then.

SLS is a family-run dimension sawmill with a diverse business model, making lumber as well as treated wood products and landscape mulch, the latter the basis of a retail operation that serves the booming Calgary-area housing market. Like all sawmills today, SLS is hanging tough in the face of slow markets and rock-bottom prices. It has reduced its operating schedule, and dialled back its log needs. Still, it has clearly chosen Graham’s operation as a long-term business partner moving forward, a vote of confidence that helps the logger stay optimistic.

“It’s a scary time in the industry right now, and nothing is certain. But they’re running, and they’ve got some diversity, with their Top Spray mulch business (ed note: A retail fleet of trucks delivering processed sawmill mulch to homeowners and landscapers across much of southern and central Alberta), the pressure treating, the fence posts, so they’ve got more options than most. Barry (owner Barry Mjolsness) is a heck of a nice guy to deal with, so there are a lot of positives.”

All of which makes Graham’s move from the BC Interior a decade ago look prescient, as mills in much of that region struggle through bankruptcy protection and ownership turmoil. Not that it was an easy move at the time, as SLS made the veteran logger jump through a lot of hoops before landing the
contract.

“This is a high-profile area to log, with a million people just 30 minutes away in Calgary, and all the recreation areas and high-price developments around. The city is moving out here, and we have to work around that. The mill could see this happening 10 years ago, and so wanted to make sure whoever took the contract had the right approach, and could handle the job within those constraints. It was quite an involved process we went through to get selected, and it didn’t take us long to see why. That first year, we worked in Bragg Creek (a wealthy “urban ranch” development area with lots of high profile homeowners). You learn pretty quickly in that environment.”

One Stop Shopping
Higher visibility aside, one of the first changes Graham dealt with was the move away from the roadside processing he was used to in the BC Interior. While you may guess that roadside slash piles and burning would not be popular in this tourist area, SLS woodlands manager Gord Lehn says that ironically the move to stumpside was driven more by business and forestry reasons.

“The mill gets greener sawlogs this way, but also we have an issue with the Chinooks here damaging our regeneration. They really dry things out in a hurry in the spring, which can be hard on exposed seedlings. By leaving the slash in the bush, the drying is mitigated. It also reduces roading costs. You’ve got the extra loader for decking, but overall, the greener wood, the better stewardship, and less road building pay off. Ironically, leaving the slash in the bush wasn’t that popular with other users at first, so we had to do some educating.”

Either way, from Day One ESC had to take its processors to the stump. There was a learning curve, but not a long one, Graham explains.  “We saw a difference in production at the start as we adjusted to the system, but now I’d say we don’t see any difference. The guys also like it more, as they’re moving around, and can see what they are accomplishing as they work. It’s less of an assembly line with a massive pile of decked wood staring at you all day.”

Graham also went from being a stump-to-dump contractor to just running a single harvesting side, but he doesn’t seem to miss the headaches of hauling or roadbuilding. Also keeping his head clear is the fact that all the felling, processing, skidding, decking, and loading work for over 260,000 m3/year is handled by just two brands of equipment, and model numbers you can count on one hand. All the prime movers, including bunchers, are Caterpillar forestry machines, and the three processors are identical Waratah HTH 622Bs, all supplied and serviced by Finning (Canada) out of Red Deer, AB.

Felling is via Cat 741 and 541 bunchers with Cat heads and Quadco saws. Both are flat-bottom machines despite the slopes in this part of Alberta.  “The processors and skidders have to be able to follow behind anyway, and these bunchers climb the slopes pretty good as is – up to 50% patches.” The Waratah 622Bs are on two Cat 320 FMs, plus one larger Cat 322 with single grousers for steeper slopes. 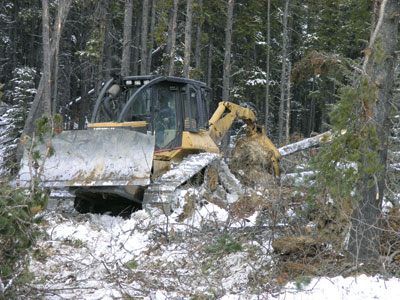 Aside from a pair of Cat 545 grapple skidders, ESC relies on a Cat 527 high-drive track skidder to access wet spots or steeper pitches, a holdover approach from Graham’s BC days. Two Cat log loaders finish off duties, one older spare loader with a power clam, the other with a butt-n-top grapple. The loaders are used exclusively for building decks, as the mill provides its own loader for the trucking, or uses self-loading haulers. Using the decking loader allows the skidders to just drop and run, allows for concentrated piles, and makes hauling as efficient as possible.

“It’s nice decking with the loaders. We try to get a 4- or 5-m high deck, and as long as possible. Then the trucks just come in and don’t have to move – they just load up and roll.”

Graham has a long history with Cat forestry gear, but beyond that he explains his loyalty as yet another quest for simplicity. Graham has a full-time mechanic, but his operators, and especially his foreman do most of the day-to-day maintenance and small repairs. 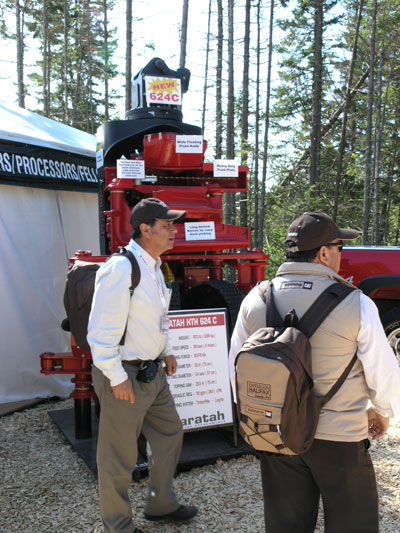 “This way, operators can move from machine to machine, but there’s only one basic carrier and one processor to learn. Our foreman’s really good with the Waratahs, but whoever it is, once they can troubleshoot one, they can troubleshoot them all. It also keeps it really simple for inventory. Basically, it’s all the same filters, same parts, even the same dealer,” he says with a smile.

That dealer also plays a large role in keeping on-site inventory to a manageable level. It also helps that his operations are rarely more than an hour from town, or at most 90 minutes from Calgary. “For the most part, we’re 30 minutes from town, so we just have to keep the parts that break often on the service truck. We can get most of what we need overnight, since most of it is three hours away in Edmonton (Finning’s main parts depot), or just over the border in Spokane (Cat’s major western parts depot). If we call before 5 p.m., we’ll have the part in Calgary the next morning.”

“It all keeps the resale values up, and helps avoid breakdowns. If the mechanic sees something, or the oil samples are haywire, it’ll save you a lot of money. We’ve had cases where we have caught something in time, and saved a lot. Of course, we’ve had cases where we let it go because we were right on break-up, and it cost us a lot too,” he adds with a grin.

One part of the business Graham can’t simplify is staffing. Like every logger in Alberta, he sees a lot of turnover come his twelve-week spring shutdown, as the oil and gas sector beckons.

“We lost an operator just last week in fact – The oil patch offered $5/hr more, and he couldn’t resist. It’s crazy, but you live with it. We have a core group of supervisors who keep it all together, but new operators are part of the business now. The oil patch is attractive for the younger guys without families, but at a certain point they want to be home every night, and we can offer that.”

The Right Optics
He can also offer pride in a job well done. In fact, little has changed regarding the work at hand since that first year in Bragg Creek. ESC still mixes standard logging jobs with critical work in sensitive areas. While CFI was on site in mid February, SLS was running a typical clearcut 30 minutes from town, but was also moving the last few loads from a select logging site in the Kananaskis region southwest of Calgary, between Cochrane and Canmore, the “Gateway to Banff”. Perched on the Rocky Mountain foothills, the area is a popular outdoors playground for locals and tourists alike, who gather here to hike, ski, mountain bike, and more.

SLS woodlands manager Gord Lehn says the blocks in question were actually identified in a modelling exercise to reveal areas most susceptible to the spread of the mountain pine beetle (MPB), and as such are part of Sustainable Resource Development Alberta’s overall MPB salvage and spread prevention plan. Still, that can all get lost when trees start to fall, and these highly-visible slopes open up.

Driving up to the site with Graham, two things quickly become obvious – why both logger and mill were concerned with the potential for controversy; and how good a job they did in getting the work done with minimal impact. The slopes are easily visible from the main highway taking visitors into the region. Moreover, close neighbours include a Tim Horton’s kids camp, a tourist visitor information centre, private lodges, and outfitters. Lehn says the first step was to carefully model a series of feathered cut blocks to find a pattern that blended in with the area’s other natural openings, as well as such natural features as rock outcrops, gullies, or riparian buffers. Then the mill notified interested parties and held public meetings to make sure everyone knew what was being done, and why. Then Graham’s crew went in to do the actual harvesting.

“We targeted the pine, but you have to take out a few other species if they are in the way, and really there wasn’t a lot of spruce or fir in this stand. We did more of a stand retention cut, trying to blend the openings into the mountainside. I think it turned out really well,” he says as we cruise from one opening to another in one of many Ford Super Duty’s the crew runs. As the MPB infestation continues to move east, there’s no doubt Graham and crew will see more such work. Business as usual for ESC then.