The small northeastern Nova Scotia community of Antigonish is recognized for hosting the oldest continuously run Highland Games in North America and, since 1855, as home to St. Francis Xavier University. The town may also be able to lay claim to much of the green colour that dominates Nova Scotia’s landscape, especially in the eastern part of the province, as one of the region’s largest tree-growing and -planting companies was started by two local boys back in 1985. 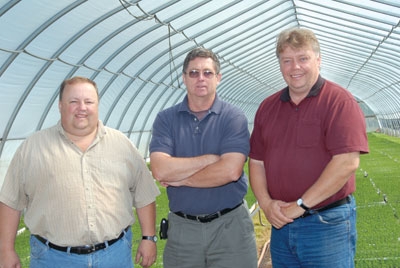 Scott & Stewart’s owners in one of the company’s 21 greenhouses. Left to right are: Ralph Stewart The small northeastern Nova Scotia community of Antigonish is recognized for hosting the oldest continuously run Highland Games in North America and

Shaun Scott and Ralph Stewart both graduated from the local high school but didn’t really know each other until they met again a few years later. By that time Scott had a bachelor of science in forestry from the University of New Brunswick (UNB) in Fredericton and Stewart had graduated as a forest technologist from the Maritime Forest Ranger School (now called the Maritime College of Forest Technology), also in Fredericton.

“We both had a love of the forest and forestry and we had a common vision, which was to build a fairly integrated company that could handle as many different aspects of forest management as possible, but in the beginning it was just the two of us,” explains Scott. “That made it difficult, but we started small with an office in Antigonish and produced forest woodlot management plans for clients, planted a few trees and did a small amount of harvesting.”

That was in 1985. Four years later they brought a third partner and shareholder into the company, Chuck Bowers, who, like Scott, has a bachelor of science in forestry from UNB. He was also experienced in woodlot management and, as he notes, “it just made sense for us to all work together rather than compete against each other for business.”

Buying a Nursery
The trio continued on at an office in town until 1994 when a nursery near the village of St. Andrews, just outside of Antigonish, came up for sale. “It was a family-owned nursery that had been growing seedlings for Stora Forest, but when Stora made some structural changes and didn’t need the nursery’s seedlings any longer, we were able to buy it,” Scott explains. “We saw some synergies between growing seedlings and the other work we were doing, and as it has turned out, the nursery has served us well over the years.”

Originally built in the 1960s for growing tomatoes, the facility had been expanded to 30,000 square feet of production space, had six greenhouses, and could produce 1.5 million seedlings annually when Scott & Stewart purchased it. “We kept the production at around 1.5 million for a couple of years and then expanded to around six million seedlings annually,” adds Scott. “We used a hard wall container system called a multi-pod and grew predominantly one-year-old seedlings that we could seed in the spring and then ship out the following May or June.”

The company then went to a new system about six years ago says nursery manager Jackie MacDonald. “That was when we adopted a Jiffy container system that encourages lateral root growth and we added year-and-a-half-old seedlings that are sturdier and have a larger root collar,” she explains.

With various expansions over the years, Scott & Stewart has grown to 21 greenhouses and, with the addition of a mechanized seeder, can seed 350,000 trees a day. The company’s seedling clients include New Page, AbitibiBowater, Enligna and a number of smaller forest products companies in Nova Scotia.

Woodlot Management
Growing seedlings is just one part of the business and woodlot management planning is still a major portion of the company’s daily work. Only 25% of Nova Scotia’s forestlands are Crown land, while 25% is considered large private land and 50% is classified as small private land. That means the province has about 35,000 woodlot owners, notes Bowers. “At one time, small private woodlot management was paid for by the Province of Nova Scotia. In recent years, it has become more the responsibility of industry. There has been demand in the last couple of years for certified plans that qualify for Forest Stewardship Council (FSC) certification, so we go out and work with the landowners to develop management plans to help them meet the requirements of FSC.”

Silviculture
As for silviculture, Scott & Stewart has built that segment of the business up as well and handles numerous activities, including site preparation. They use a fleet of grapple and cable skidders – five John Deere models and one Timberjack – that are equipped with scarification tools. They also plant between four and five million trees annually during most years and have a team of forest workers who do manual pre-commercial thinning for clients.

In 2003, a door opened up for the company to work in the utility corridor business for Asplundh Tree Service who manages most of Nova Scotia’s power corridors. “We were very fortunate to work with Asplundh,” notes Scott. “If wasn’t for the work from Nova Scotia Power and Asplundh, I am not sure if Scott & Stewart would be around today as the forest industry has been in such decline.” 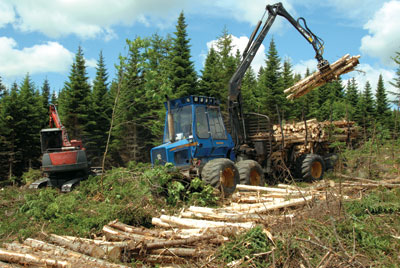 Over the years, the company has gathered an eclectic fleet of logging iron that leans towards European lines. On the Crown land they harvest for New Page, Scott & Stewart run two GPS-equipped Neusson 11-tonne harvesters with LogMax 3000 heads; a pair of Rottne 16-tonne machines, one equipped with a Rottne harvesting head and the other with a LogMax 5000 head; an Enviro feller processor that was made by Rocan and according to Stewart is great for commercial thinning; Rottne 12-tonne and 16-tonne forwarders; a John Deere 1410D forwarder, and a Timberjack 608 feller buncher with a Koring head. In addition to their own equipment, they have one contract logger who runs a John Deere 853 feller buncher with a Gilbert head.

For transporting logs from the Crown land, which is mainly on Cape Breton Island, the company works with three different trucking contractors who can each do three runs a day to New Page’s Port Hawksbury mill. “We were running about 100,000 cubic metres per year before the current recession,” Stewart says. “Right now we are down to about 70,000 cubic metres on one shift. In the past we were also harvesting saw logs as well as pulp wood from the Crown land and we will probably go back to that once the markets improve.”

As for work on private lands, Stewart says they primarily use a John Deere 1270D harvester paired up with a FabTek 9 tonne forwarder that he says is “bullet proof,” adding they bought it new in 2000 and it still has all of the original running gear. A 2004 Western Star truck with a low bed trailer is used for the frequent moves required when working in small woodlots.

To keep all of the equipment running, the company has two field mechanics that operate from a pair of 48-ft. trailers that are basically mobile shops that can be moved around with the Western Star. Two field technicians work on layout and cut block plans in the bush, while 13 full-time and two part-time machine operators run the equipment.

The company has come a long way from the two-man show started in 1985 and Scott says even in today’s economic climate they will typically have about 150 people on the payroll in the spring and summer. “The business has been good to us,” he adds. “The partnership has worked well and our different skills have been a good fit.  Although like any business, the financial side can be challenging at times, we get up in the morning because we like growing trees, cutting trees and working with very good people.”