While many Canadian sawmills have reduced production levels due to the economic downturn and low demand for wood products, Domtar’s Elk Lake Sawmill in the small town of Elk Lake, Ont. has been operating on three shifts. That has been keeping Benoit Beausoleil busy. As the woodlands manager for the mill, the transplanted Quebecer has been piecing together a fibre supply plan that will ensure the facility doesn’t go hungry for logs any time soon. 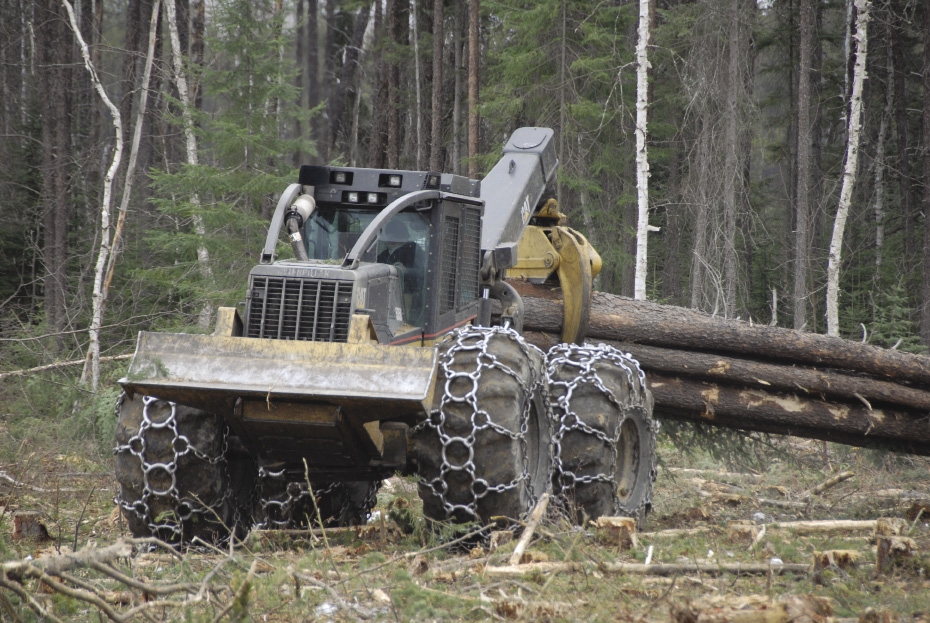 Henry Fiset and Sons Ltd. harvests almost 200 While many Canadian sawmills have reduced production levels due to the economic downturn and low demand for wood products

“We require a fairly large volume of logs to sustain production levels on a three shift basis, which on its own wouldn’t be a problem,” Beausoleil explains. “But because we are in the final year of our forest management plan (FMP) with the provincial government in the Timiskaming Forest, which is our main wood supply, we don’t have as many fibre supply options as we would like as we have to make sure our volumes all balance out at the end of the current plan.”

All in a Day’s Work
But for Beausoleil, dealing with the mill’s fibre supply is all in a day’s work, even if that means most days begin prior to the sun coming up and end after sunset. In total, Beausoleil and Martin Jean, who is the mill’s woodlands supervisor, ensure 500,000 cubic metres of softwood logs cross the mill’s scale annually. This is combined with another 250,000 cubic metres that is supplied by Liskeard Lumber, which is Domtar’s one-third partner in the mill.

Beausoleil and Jean also coordinate another 100,000 cubic metres of hardwood annually, which is delivered to the nearby Georgia Pacific oriented strand board (OSB) plant (formerly Grant Forest Products) in Englehart, Ont. and True North Hardwood Plywood in Cochrane, Ont., which is a joint venture between Kruger Inc. and Norbord Inc.

Beausoleil is no stranger to the ups and downs of the fibre supply business. He worked for Domtar for 15 years, handling wood supply at the company’s Val-D’or, Que. sawmill operation for 11 years and then at Domtar’s Grand-Remous, Que. sawmill for four years. He left Domtar to accept a position with Louisiana Pacific’s St. Michel des Saints OSB plant and sawmill in Quebec before heading to Siberia on a contract with Montreal-based KSH Solutions Inc. He then took on the role of director general of a wood syndicate group in Montreal before returning to Domtar almost a year ago when he accepted the Elk Lake position.

Focused Effort
In his latest role, Beausoleil says he can focus on the fibre supply and operational side of the business as all of the planning and silviculture functions in the Timiskaming forest are handled by First Resource Management Group Inc. (FRMG),  which is a private forest management company and agent for Abitibi River Forest Management Inc. and the Timiskaming Forest Alliance Inc. (TFAI).  On behalf of TFAI members (the Shareholders, including Domtar), FRMG assumes forest management responsibilities for the forests within the 10,000 square kilometre Timiskaming Forest, which was previously knows as the Kirkland Lake Administrative District.

The Timiskaming Forest extends westward from the Ontario/Quebec border for 166 kilometres, and northward from Lake Timiskaming to Lake Abitibi.

TFAI is a consortium of forest industries, ranging from small independent logging operators to large forest products producers. In exchange for surrendering of their individual historical harvesting licenses, shares in this forest management cooperative were proportionally allocated and issued to six forest products producers and 12 independent logging operators. A number of acquisitions and share transfers have occurred since incorporation. “It’s a unique system that works well for us,” Beausoleil explains.

In addition to working with TFAI, having good contractors in place has also helped Domtar’s Elk Lake mill and Beausoleil stay ahead of the game. He works closely with Henry Fiset and Sons Ltd. in Elk Lake, Rosko Forestry in Kirkland Lake, Ont., Caron Equipment in Timmins, Ont., and two smaller First Nations contractors from the local area – Wincikaby Logging and Heritage Logging, which is a horse logging operation.

Fourth Generation Loggers
Henry Fiset and Sons is Beausoleil’s largest contractor at 180,000 to 200,000 cubic metres per year. The Fiset’s have a long track record in the area and are now fourth generation loggers. “My grandfather, Henry, started the company in 1954 and he brought three of his sons into the business, including my Dad, Norm,” explains Jerome Fiset. “Today, it’s me and my two brothers, Terry and Dennis, that take care of the business and my son, Travis, who is now 30, and Terry’s 22-year-old son Addison, work with us. One day, we hope to step aside and pass the company on to them and their families.”

The Fisets run a tree length stump to dump operation and operate year round except for Spring break-up, which is when Jerome says they bring most of their equipment into the company’s 7,000 square ft. shop in Elk Lake for everything from oil changes to major overhauls.

Jerome says most years, the company has about 25 people on payroll, but he adds that when you factor in subcontractors, they keep closer to 40 people working. He says most of their logging is for Domtar’s Elk Lake operation, although he notes that with the TFAI in place, sometimes the wood goes to other mills.  For the most part, the Fisets run five sorts, three for conifer and two for hardwood. On the conifer side, the sorts are strictly for species – Jack pine, spruce and balsam, while on the hardwood side, one sort is for 14 ft. logs for the Georgia Pacific Englehart OSB mill, while the second sort is for peelers that are mostly sent to True North Hardwood Plywood.

Mechanized Show
The Fisets run a bunching and skidding show with roadside delimbers. In total, they have four feller bunchers, including three Timberjack 900 models and a 2009 John Deere 953 they picked up last year. All of the bunchers are equipped with standard Waratah heads that can handle a maximum tree diameter of 18-inches in one cut. “Anything larger requires two passes,” adds Jerome.

For skidding, it’s all Cat with three 535 models, all equipped with the stock grapple. Delimbing is handled by a John Deere 2154 and an older John Deere 230. Both have Denis stroke delimbing heads. Trucking is taken care of with four Kenworth tree length trucks.

Road building is also handled in-house by the Fisets and Jerome says they typically build between 80 kilometres and 90 kilometres annually of spur and main road. “We have specific crew members that work on road building when they are not logging  and they use three Cat excavators  – a 322, a 324 and a 325 model, a John Deere 850 dozer, a John Deere 744 front end loader, and a Champion 760 grader,” he says. “Road building is normally a year round activity as we try to stay ahead of the game, but in this last year we have focused more on logging to make sure we get every stick possible to the mill so that they can keep running three shifts.”

Jerome says they don’t mind giving it their all to keep the mill going, even though he admits the rates aren’t quite where they need them to be. “We understand it is tough right now for the mills so we are trying to survive on lower rates by doing what we can,” he explains. “We have newer equipment, well trained people, and our machines are operating at as high of a utilization rate as you can get. We’re just hopeful that it will all pay off in the long term and the rates will improve when the markets pick up. Being able to work with your family in your home town is as good as it gets and we don’t want to see that change.” 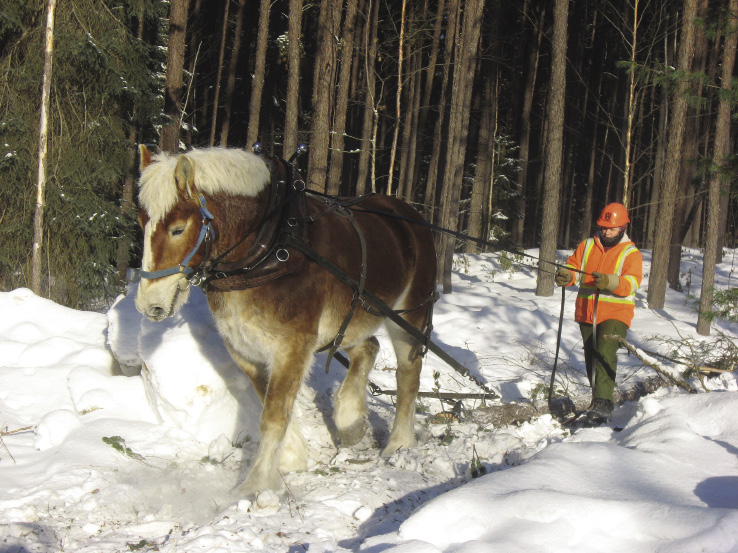 Horse Logging Operation
At the other end of the volume scale, Beausoleil works with Heritage Logging, a First Nations-owned horse logging operation that delivers approximately 1,000 cubic metres per month of much needed cut-to-length(CTL) wood to the Domtar Elk Lake mill.

“We have been working with Domtar for about the last five years,” says Jim Bruce, the operations manager at Heritage, who is also knows as “Dad” to the company’s brother and sister ownership team of Jim Bruce Jr. and Carolynne Windich.

Jim Sr. says what they do is a real niche market and it has its place in the industry. “We hand fell in blocks where selective logging is required, such as along lake shores, and you wouldn’t even know we were there unless you hiked in and found the stumps.  We also do clear cutting in areas that are too small for the mechanized guys to be profitable. And even then, a block will be harvested over a year or more, not a month, so the regeneration is fantastic, there is less disturbance, and we leave the tops and branches in the bush to decompose naturally and return nutrients to the soil.”

Managing a horse logging operation is quite different than a mechanized logging show. For starters, the horses are alternated and they only work about half the time of the loggers that fell the trees. “We typically run eight hours per day, five days a week with an hour off for lunch,” notes Jim Sr. “Each horse will only work about half of that time and then they go home with us on weekends.”

“They eat a lot,” adds Jim Sr. when asked about the horses’ typical day. “When they are not working, they have a shelter to use if they want to stay out of the weather, and they can eat as much as they like. Each horse gets around 9 kg. of grain and high energy foods every day as a supplement to their hay, which gives them lots of energy.”

For Domtar’s Beausoleil, the extra volume of CTL logs delivered by the horse logging operation is very welcome. “It only makes up a small part of our volume, but we are happy to have it,” he says adding that they also like the diversity of having a horse logging crew in the mix.

Looking forward, Beausoleil doesn’t see any slowdown in production at the Elk Lake sawmill, especially with the lumber prices on the rise and things looking up for Canada’s lumber producers. So for now, to keep the logs flowing he will have to continue to source wood from traditional and non-traditional sources. A challenge? “Yes,” he says. But it’s all in a day’s work.