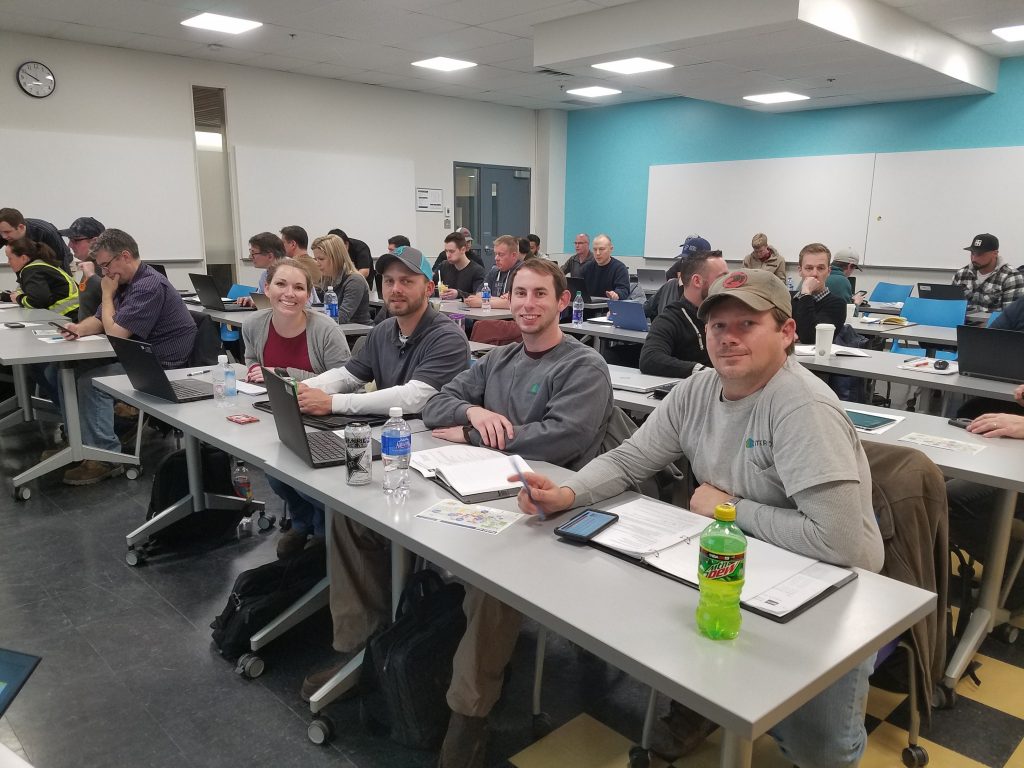 In January 2018, the British Columbia Institute of Technology (BCIT), in cooperation with four major forestry companies – Interfor, Canfor, West Fraser and Tolko – launched a new educational program to help develop the next generation of sawmillers. The program, called the Industrial Wood Processing Program, is one of three programs that BCIT and the industry consortium have been working on in an effort to address the ongoing talent shortage in the forest sector. Now, the second program (currently being piloted), called the Business of Sawmilling, is set to launch in June.

BCIT is no stranger to providing forestry programs for students. From the 1980s until the early 2000s, the school offered a program on lumber manufacturing, explains Mark Stock, Interfor’s senior-vice president of human resources and IT, who has been the program’s executive sponsor. But, when the industry experienced a downturn in the mid-2000s, demand for the program dwindled, and the program ended.

As a result, 10 years later, “we found ourselves as an industry facing a real talent shortage,” Stock says. “We had an aging workforce and the BCIT program had been one of the primary sources of new talent into the industry while it was operating, to the extent that pretty much every major forest company in western Canada has executives that were graduates of the program.”

‘Earn while you learn’

So, in 2016, the four companies decided the time was right to restart the program and met with BCIT to discuss the best way forward, ultimately deciding to launch three programs, starting with the Industrial Wood Processing Program in 2018. These courses are open to employees from all forestry companies across North America.

“The level of cooperation between those four founding companies was quite honestly unprecedented,” says Laurie Therrien, manager of corporate training and industry services at BCIT and the point person at BCIT on this project.

The four companies, in close collaboration with BCIT’s School of Construction and the Environment, came up with the program’s educational content, bringing the content up-to-date and changing the delivery model to be more accessible to students.

The old BCIT program required students to attend classes in Vancouver for two years and do some co-op assignments in the industry. Now, the Industrial Wood Processing and the Business of Sawmilling programs are offered online with virtual instructors, classes and projects.

“We decided if we were going to rebuild it, we wanted to change the delivery so we could bring the content to the students,” Stock explains. “We say, ‘You can earn while you learn.’ So, people could be working in their jobs in the sawmill and taking the training program.”

The programs are also focused on understanding sawmilling throughout North America, as many of the major forestry companies have operations throughout Canada and the U.S.

“The material was re-written so we address forestry issues in southern U.S., forestry issues in eastern Canada, in the Pacific Northwest, and we go through some of the different technologies as well, so we’re not just teaching people from a western Canadian context,” Stock explains.

“We wanted to make sure that when the next downturn came, there would still be enough people going through the program that you could keep it going through ups and downs of the industry,” he continues. “We learned our lesson that if you make it too specific and too limited in size and scope, if industry is going through a tough time, you end up with not enough students coming and eventually the program can’t operate.”

At first, uptake for the Industrial Wood Processing Program was a little slow, Stock says, with Interfor suggesting the program to employees. But once the feedback from the first group of students came in, there was a big jump in the number of interested employees.

“In the last round of applications, I think we had 40 people apply and we had 17 spots open,” Stock says. “That’s pretty typical that we’re getting double the number of applicants than the number of openings we have. Increasingly, it’s being viewed as the way to accelerate your career in the company.”

After an initial cohort from the four founding companies went through the Industrial Wood Processing program, it was opened up to other companies.

Since then, 19 companies have participated in the program and 284 students have gone through it. Another two cohorts, consisting of 48 students, will start the program in June.

“To say the uptake has been successful is an understatement,” Therrien says. “We designed this to be able to scale up and scale down depending on industry’s needs, and we haven’t had to scale down yet.”

Part of the program’s success is because the companies have also decided not to hire people after they have taken the program, but to hire people who show potential – regardless of whether they have experience in sawmilling or not – and put them in the program. Essentially, the course can be used to help onboard new hires or to provide long-term employees with formal training, Therrien says.

And the Industrial Wood Processing program has not been limited to employees working on the operations side of things.

“A lot of these big lumber companies (Interfor being one of them) are very interested in having people from different organizations have a holistic understanding of the business as a whole,” Therrien says. “So, the first cohort that came through were all sawmill operators, but we now get people from IT, from purchasing, from HR.”

Following the success of the first course, the second course, called the Business of Sawmilling, is set to launch in June.

“We realized, if we’re building the future with people we want to go on to lead companies, we also have to teach them the business, not just the technical parts of sawmilling,” Stock says.

For the Business of Sawmilling course, BCIT took a different approach, Therrien says. They brought in educational business experts from their School of Business, as well as industry experts who have hands-on expertise in the business of sawmilling.

“So, our course development teams had quite a unique flavour where we had an instructional design specialist, a business instructor and an industry expert,” she says. “We did get the right people in the room. It wasn’t without its pain, but we got there.”

This program was first piloted in October, with a cohort of 20 students from Interfor, Canfor, West Fraser and Tolko. Another 28 students from eight forestry companies (including the original four) are set to begin the course in June.

Given the high lumber prices right now, it’s no surprise that students are interested in learning more about the business of sawmilling. The booming lumber market also means companies have the money to send students to these courses, Stock says.

“There’s definitely a relationship between the economic health of the industry and the amount of interest we get,” he says.

Moving forward, BCIT and the forest industry consortium will be looking at developing the third program in the fall. The content of the program has not yet been decided upon, but it “would likely build on the foundation that the people who have opted to take the two other programs have learned,” Therrien says.

The forestry group is also speaking with forestry companies and associations in eastern Canada about the possibility of running the programs in French, Stock says.

Investing in programs like these are key to developing your people, he adds. Interfor not only encourages long-term employees to take these courses, but also puts new employees through the program.

“We find it helps bridge them into the workplace,” he says. “They’re learning the theory and why things are happening all around them, and it makes them more comfortable around the machinery and their peers, so we have a much higher retention rate when we take people out of college and put them into sawmills.”

As a result, Interfor has seen a jump in the number of internal promotions in the company, from 40-50 per cent to 75 per cent.

“That’s because those people are taking the programs, getting the knowledge that makes us have the trust that they’re ready for the next level,” Stock explains. “So, it’s been a huge win for us because if you look at the retention rates of people you promote internally, they’re significantly higher than with people who you recruit externally.”

This will be a key part of addressing the ongoing labour shortage facing the forest industry.

“I think the industry as a whole is facing a generational shift of talent, and has to learn how to develop its own people again. We’ve been able to live off of historical investments in people, but the demographics have caught up with us and if we’re going to meet the increase in demand for lumber that we’re seeing these days and the promise of CLT in the future, we’re going to need to learn how to develop our own people again,” Stock says.

Editor’s note: BCIT will be hosting an information session on June 15 from 12:00 – 1:00 p.m. PDT, where people can learn more about the program. Sign up at www.bcit.ca/event/industrial-wood-processing-online-information-session.