Plant manager and part-owner Bill Peresky of Mountain View Specialty Products Ltd. knows that if his Abbottsford, BC remanufacturing company is going to emerge successfully through the next 18 months, it is going to take a team effort. 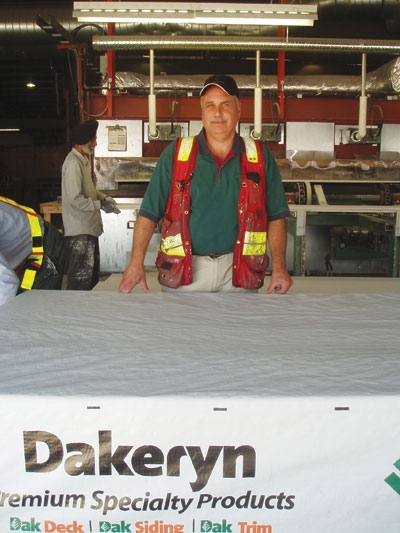 “We have weekly meetings,” he says, where employees are briefed on the market conditions and what the plant needs to do to survive. Employees are encouraged to ask questions and to input suggestions. These 20-minute meetings are “on our time, not theirs,” tells Peresky.

Mountain View and its employees have completed some impressive accomplishments over the past four years. In November 2004, when Peresky, in partnership with North Vancouver, BC-based lumber wholesaler Dakeryn Industries Ltd., took over the Abbottsford plant it was sliding into receivership. Dakeryn was the plant’s major customer and management feared the loss of a facility to do its work.

Peresky, who was working as a consultant, met with the five partners in Dakeryn and they decided to form a joint venture to revitalize the plant.  Two years later, the joint-venture acquired Westmark Products Ltd. in Edmonton, AB, a reman plant which now serves as a distribution point for Dakeryn’s Prairie customers. While Peresky is co-owner of both plants and supervises both, he is resident in the Abbottsford operation.

“When we took over (Abbottsford) we had 75 employees and produced 18 million bdft a year,” says Peresky, a former MacMillan Bloedel (MB) Chemainus management employee, who later went on to manage a specialty products mill on Vancouver Island for MB before working for a subsidiary of BC’s Council of Forest Industries (COFI), and finally into consulting. “We now have 28 employees and they produce 38 million bdft,” he adds. The workforce has been trimmed by more than 65% and productivity has shot up over 100%.

“We have had to work hard to find the right people,” says Peresky, adding that “if you are the type of employee who has to be constantly told what to do, then you are probably not right for us.”

If there is an integral element that describes those “right” employees, it is more than simply initiative. It is a vested interest and a commitment. “We are committed to our people (by keeping them employed), and so it is only fair to ask them to be committed to us,” says Peresky.  A walk through the plant on the four-acre site tells the story. People and product are moving. It’s a charged environment. The place hums.  The plant is usually running with 75-80% of the people needed to run the equipment. “So, we are always moving to catch up,” Peresky tells.

One of the benefits of the plant and its contained work stations and strong communications between management and employees is that it can change the order file quickly. Peresky says that a customer’s demands in today’s environment can change dramatically in days. “You have to be flexible,” he says, adding that his plant can switch between products quickly – something larger operations are unable to do.

Peresky has been using some of the old MB management strategies that once allowed the company to become one of the largest, and best run, forest products companies in Canada. MB was known for using the employees to solve major problems. Peresky has done the same, and is continuing to do so.

Approximately 2.5 years ago, there was a move to upgrade some of the facility’s equipment. While the plant had gone to 38 million bdft in product, it wanted to gear up further to reach a production of 50 million bdft to catch a surging US market.

The “bread and butter” of the operation is the staining line that churns out stained or unstained fascia board in a variety of thicknesses and widths. The mill needed a new line, but the move would be costly.

“We sat down with our employees and told them that we wanted to expand our market share.  Now, how do we get to that point?” Peresky tells.  An employee task force was struck to examine available technology and determine what would best serve the plant’s needs at the best cost advantage.  “We knew that an off-the-shelf system would cost between $1.2 and $1.4 million.” he said.

The employee task force came back with another solution – why don’t we build our own line and customize it to fit the operation. The task force “bottom-lined” it for the next few months attempting to gauge the cost of the work and how it could be done. “We designed our own dryer and stainer for under $225,000 and the system is more flexible than if we had purchased one new,” says Peresky, adding that today the employees are “very proud” of their innovation and take pride in its operation.

Further dollars were spent in ergonomics at the workstations. Just about every workstation was examined to determine how the work might flow faster and also provide more comfortable handling for employees. It might have been just a small change such as feeding material from the right side instead of the left – as it’s easier to reach with the dominate hand.

As for involving employees with decision making in the mill, Peresky says it’s his job to look at the mill’s larger picture and let the employees who work in the plant look after its smooth operation.

“People in management often take too much on their shoulders,” he says. Ultimately a decision rests with him, but if employees can show something works better a certain way, he’s ready to bow to that expertise. “Getting people involved and being responsive makes us more productive,” he says.

It’s also their knowledge that keeps the machines humming as the nature of the reman beast is that it uses second-hand equipment, says Peresky.  Current equipment in the plant is related to the three main product areas that Mountain View Specialty puts into the market. (Dakeryn buys and sells lumber, which is finished in the plant but Mountain View also has individual customers who bring material in for custom remanning).

Loads of SPF lumber arrive at two bays and can be shifted into a tilted infeed table to a Stetson Ross 610 lumber planer. The dressed lumber can then be fed onto a green chain, but there is the option of also going through a 54-in Turner resaw or through the trim line if required. The plant can also produce l00% Lodgepole pine or SPF, premium pattern stock siding  (WP4 and WP11) or a log cabin siding. Tongue-and-groove decking or roofing is also available. 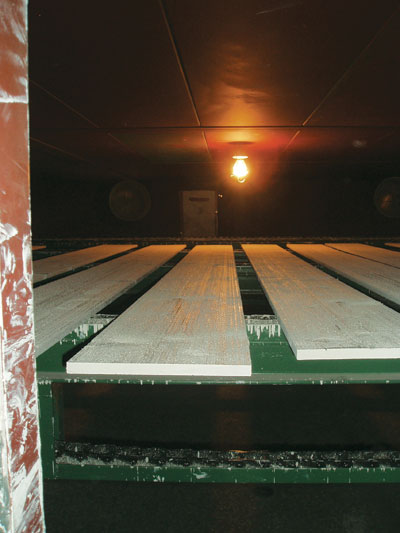 The pre-finished fascia boards are currently the bulk of the plant’s output as they go to the North American building wholesale market. Mountain View’s plant also includes a Western Pneumatic finger-jointing machine (where fascia board can also be finger-jointed), but currently it is only operational a few shifts a month due to market conditions. 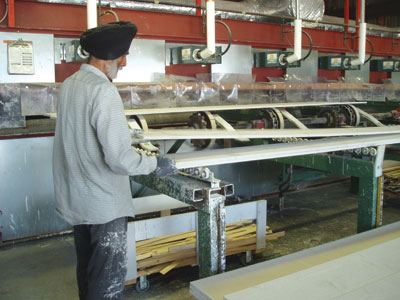 The plant has two fascia board staining lines; the new one and the older line, which is currently shut down. The material arrives from the planer into the line where primer is applied before sending it through to the dryer, a housed-in area where fans and heaters facilitate the rapid drying of the stock as it moves down the line. At the back end, the material is stacked, strapped and wrapped.

Since the plant itself does not directly own any of the wood it finishes or adds value to, it is really a barometer of what is happening with local suppliers. The material is then shipped out to distributors or suppliers. Currently, most of the product that would once have headed to the US is now destined mainly for the Canadian distribution chain and ends up in Canadian homes.

“We have gone from a 70-80% US to 70% Canadian order file,” says Peresky. The downturn in the market has impacted suppliers, but Dakeryn’s North Vancouver sales team has turned to working harder as well. It’s added five new sales staff to its contingency.

“So, they have grown in the last 18 months when others have downsized,” says Peresky. The Westmark operation in Alberta currently throughputs 50 million bdft a year. Westmark is a major distributor to building suppliers in the Prairies and Eastern BC, including outlets such as the Rona-Revy Home and Garden Centres. “We are constantly pursuing new opportunities,” he says.

This renewed sales strength and the move by Peresky to have his crew pull as a team (even making new sales suggestions) is further combined with what he calls a “sharp pencil” strategy. “It is kind of the key to our success,” he says, adding that the ability to carefully track the costs of processing a customer’s lumber and determining the width of the profit margin is integral to survival in today’s market. “We spend a lot of time in the offices analyzing that information,” says Peresky.

He currently uses the LISA lumber tally system for remanners. “We have a couple of people who are very talented and can use the system properly,” he says. LISA offers inventory control, costing and profit analysis, sales order management and reporting, production reporting, and a number of other accounting features. In addition, says Peresky, the company then extracts data and manipulates it in Excel. As a result, office staff have developed a historical in-house database that can tell him the profitability of accepting orders and where he incurs costs.

Adapting to the changes in the US market has been a “huge challenge,” Peresky says, but “we are now prepared for it as it rebounds. We believe that we are going to come out of this a lot stronger.”